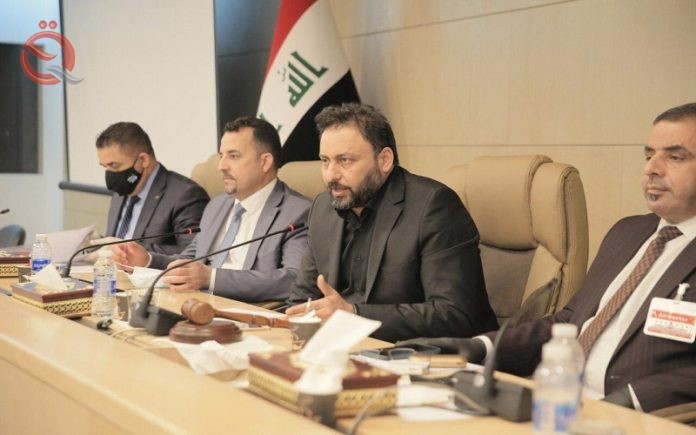 On Tuesday, the first deputy speaker of the House of Representatives, Hassan al-Kaabi, demanded that the financial dues be paid to the farmers and that crops be stopped informally.
Al-Kaabi’s office said, in a statement seen by “Al-Iqtisad News”, that “the first deputy speaker of the House of Representatives chaired a meeting organized by the Agriculture, Water and Parliamentary Marshes Committee, in the presence of its president Salam Al-Shammari, Minister of Agriculture Muhammad Karim Jasim, Trade Minister Alaa Ahmed Obaid, the National Security Advisor and a number of managers The stakeholders in both ministries, to discuss the overall problems of farmers, activate the private sector and investment, take solutions in their regard, and discuss obstacles to receiving wheat in the silos of the Ministry of Trade and companies of the Ministry of Agriculture and the mechanisms of examination and purification in place in the companies of the ministry.
During the meeting, Al-Kaabi addressed Prime Minister Mustafa Al-Kazemi to "instruct the relevant authorities to restore work with technical specifications in the mechanism of receiving the barley crop and expedite the delivery of financial dues to farmers for the marketing of barley crops for the year 2019, especially as the issue of receiving farmers' dues is a priority for the executive and legislative authorities" Despite all the current financial conditions. "
He stressed "the need to open new marketing centers to accommodate the increase in the production of wheat and barley crops for this year and to reassess the support provided to farmers across the country."
Al-Kaabi demanded to "stop the operations of entering wheat and barley crops informally and obligate the supervisory and security services to monitor the work of the Ministry of Commerce silos and uncover corruption in a number of them, and to reinforce the role of these agencies also in auditing the control procedures at crop receiving sites, so as to ensure the smooth flow of the process Marketing and maintaining self-sufficiency, as well as activating the decision of the House of Representatives - the Agriculture Committee not to transfer wheat and barley crops between the provinces.