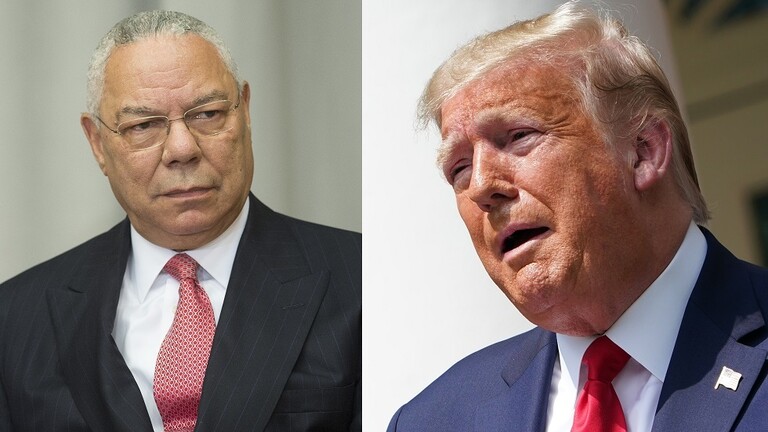 US President Donald Trump responded to former Secretary of State Colin Powell, who said he would vote for Joe Biden in the upcoming presidential election, and reminded him of the catastrophic wars of the Middle East.

"Colin Powell, a true arrogant who was responsible for ushering us in the disastrous wars of the Middle East, has just announced that he will vote for another sleepy arrogant Joe Biden," Trump said.

He added: "Didn't Powell say that Iraq possessed weapons of mass destruction? Iraq did not possess them, but we fought the war."

[ltr]Colin Powell, a real stiff who was very responsible for getting us into the disastrous Middle East Wars, just announced he will be voting for another stiff, Sleepy Joe Biden. Didn’t Powell say that Iraq had “weapons of mass destruction?” They didn’t, but off we went to WAR![/ltr]

Trump's tweet came in response to Powell's statement to "CNN", where he said: "Certainly I can not in any way vote for President Trump this year."


“I cannot in any way support President Trump this year,” Powell, who did not vote for the Republican president in 2016, told CNN. Trump responded by calling Powell a “real stiff” on Twitter.


The criticism comes as the nation faces a trio of crises: widespread protests over police violence against black men and women, the coronavirus pandemic and a sharp economic downturn. It is rare for Republicans to criticize Trump directly, and more so for members of the military establishment, who typically stay out of politics.


The New York Times reported on Saturday that George W. Bush would not vote for Trump, citing sources close to the only living Republican former president.


Many of the Republicans now criticizing Trump also did not vote for him in 2016.


Tim Murtaugh, a Trump campaign spokesman, said in a statement, “President Trump has record support within the Republican Party, however the adoration of the liberal Beltway media is alluring and powerfully attractive to some DC insiders.”


Since winning the White House, Trump has secured an iron grip on Republican loyalty. Many former critics, such as Senator Lindsay Graham, have become ardent backers.

Several Republican groups have formed to oppose Trump’s reelection, including a super PAC, the Lincoln Project, and a new initiative called Republican Voters Against Trump, which last week kicked off a $10 million digital ad campaign.


“That doesn’t do a whole lot for me. If you’re not willing to say it, you may as well put on the red hat,” he added, referring to Trump’s signature campaign baseball cap.


Powell said he would vote for Biden, going a step further than some other Republicans who have said they do not support Trump but have not backed his Democratic rival.


“I haven’t voted for him, so I’m not going to start now, but that’s a different question from actively supporting Biden,” said Mark Sanford, the former Republican South Carolina governor who mounted a brief primary challenge to Trump last year.

[size=21]The public denunciations from figures including Powell and Murkowski could sway more Republicans, Sanford said.
“When these dominoes start to fall, they can fall a lot faster than people think,” he said.[/size]