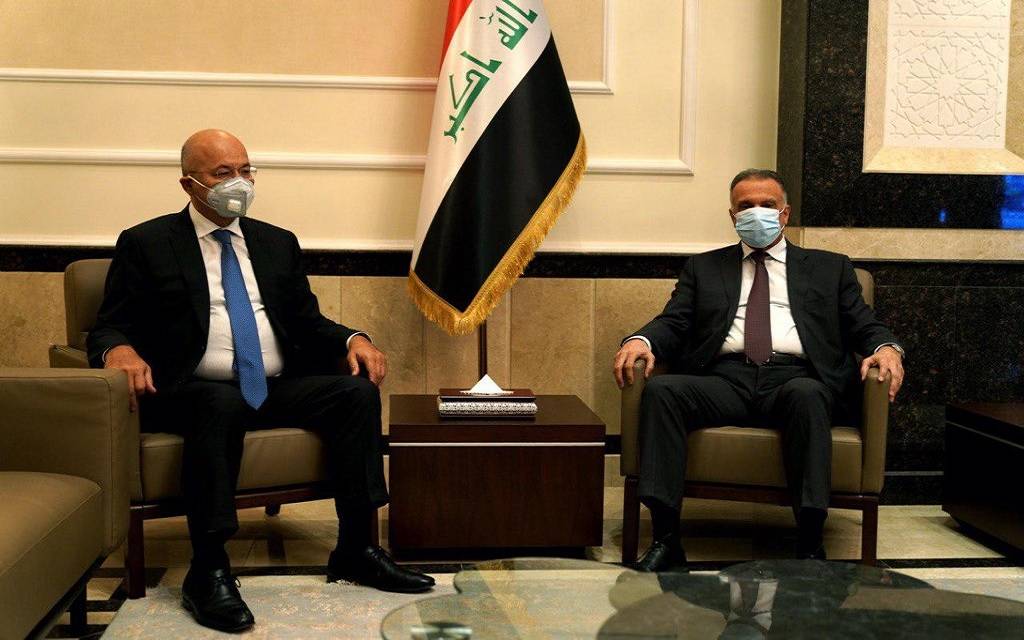 Mubasher: The Iraqi Prime Minister, Mustafa Al-Kazimi, received today, Sunday, the President of the Republic, Barham Salih, and a number of key issues were discussed during the meeting.


The Prime Ministers and the Republic discussed the latest developments on the internal level, economic and security conditions, the steps to be taken in light of the challenges facing the country due to the Corona pandemic, and the deterioration of world oil prices, according to a statement by the Presidency.


It was emphasized, according to the statement, that the government will use all its capabilities to improve the service reality of citizens, confront corruption and reveal its potentials, and to achieve the aspirations of citizens to achieve the desired reform in all joints of the state.


Saleh congratulated the Prime Minister on the completion of the cabinet , to implement his government program voted by Parliament, and made every effort to provide services to citizens.

Yesterday, Iraqi President Barham Saleh discussed with Prime Minister Mustafa Al-Kazemi the latest economic and security developments, while Al-Kazemi received a written message from his British counterpart Boris Johnson, conveyed by the British Ambassador to Baghdad Stephen Hickey, at a time when the Al-Nasr coalition confirmed its support for Al-Kazemi’s government He called on her to carry out the tasks of the transitional phase, noting that this government came as an alternative to the mistakes and sins of the previous government, while the representative of the "Saeron" coalition, Rami Al-Skeini, affirmed that the Al-Kazemi government after its completion will face difficult challenges.
A statement by the Iraqi Presidency stated that, “Saleh visited Prime Minister Mustafa Al-Kazemi at his headquarters and congratulated him on the occasion of completing the ministerial formation, to implement his government program that was voted on by Parliament, and made every effort to provide services to citizens.”
Presidents Saleh and Al-Kazemi discussed "the latest developments on the internal level, the economic and security conditions, and the steps to be taken in light of the challenges facing the country due to the Corona pandemic, and the decline in global oil prices." The statement pointed out that "it has been confirmed that the government will use all its capabilities to improve the service reality of citizens, confront corruption and reveal its potentials, in a way that fulfills the aspirations of citizens in achieving the desired reform in all joints of the state."
The Iraqi President also discussed with the European Union ambassadors Martin Hoth and Canada Ulrich Shannon to Iraq, strengthening friendship and cooperation in all fields, and the importance of the international community's support to Iraq in preserving its sovereignty, security and stability. Saleh stressed, according to a statement by the Iraqi Presidency, "the need to move away from the policy of axes and conflicts, and to adopt a constructive dialogue in dealing with crises, in a way that enhances the chances of peace in the region."
He pointed out that "facing the Corona pandemic requires more solidarity and synergy between countries to limit its spread and its health and economic impacts on all peoples of the world." The statement pointed out that "the latest political developments were reviewed, and the central role of Iraq at the regional and international levels in establishing security and peace in the region and the world."
On the other hand, a statement of Al-Kazemi’s media office said, “Heikki conveyed the greetings of the Prime Minister of Britain and Britain’s willingness to support the Iraqi government, and it addresses many challenges, foremost of which is facing the Corona pandemic that is sweeping the entire world, and its implications for the economic and financial situation.” The statement pointed out that "Al-Kazemi praised Britain's support for Iraq and its keenness to enhance bilateral relations between the two countries and raise the level of cooperation between them."
The statement pointed out that "during the meeting, there was also discussion of strengthening cooperation between the two countries, in the security, economic and investment fields, the situation in Iraq and the region, and the challenges facing the country."
In the meantime, the "Victory" coalition announced in a statement "its support for the Al-Kazemi government despite strong reservations about the quotas, interests and satisfactions imposed by some forces," noting that "support for victory stems from his diagnosis of the seriousness of the state and its current crises, which requires solidarity to overcome it", While Rami al-Sakaini, a deputy from the "Alliance for Alliance", considered that "Al-Kazimi will face new and difficult challenges in the economic and health aspects, international relations, and regional and international balance in the region."