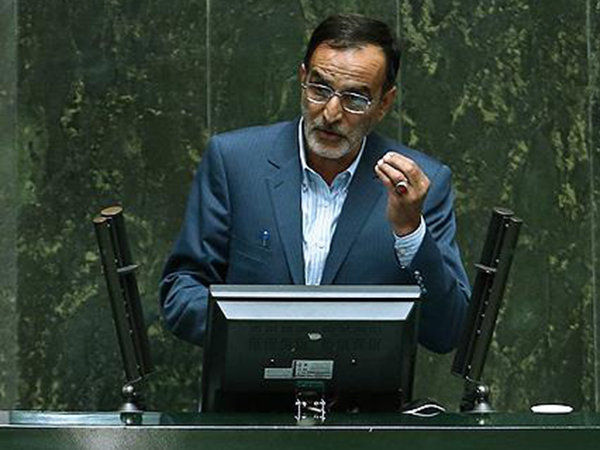 The representative of the people of Mashhad said: $ 36.1 billion of the country's foreign exchange resources were transferred to Sulaimaniyah in 1996 by the order of the President.


According to the Mehr correspondent , Javad Karimi Qudusi, a representative of the people of Mashhad, continued the public session of the Islamic Consultative Assembly on Tuesday, referring to the increase in the exchange rate in 1996 and the National Security Commission in the presence of the then Governor of the Central Bank, Ministry of Intelligence and Intelligence. The IRGC and the Ministry of Economy said: the audio and video file of this meeting is available.
He added: "In this meeting, it was announced that within three years, with the order of Mr. Rouhani, 36.1 billion dollars of treasury currency entered the market and was given to three gangs of currency, goods and drug trafficking and went to Sulaimaniyah, Iraq, which is under US rule." And it was the Saudi regime, in addition, 80 tons of gold were sent from Iran to this region.
The representative of the people of Mashhad in the parliament stated: the United States withdrew from Borjam, the interest on people's deposits decreased and liquidity flowed to the market. Within a few months, the price of each dollar reached 18,000 Tomans and the national currency fell. These are the achievements of Nobakht and the then head of the Central Bank.
Karimi Qudusi called the dark spot of the government's operation a gasoline sedition and stated: "Every year, the parliament approves a 15 to 20 percent increase in energy carriers, but in the 11th and 12th governments, this measure was stopped and then Mr. Rouhani woke up one night." The price of gasoline has increased to 3,500 tomans, which caused a catastrophe in the whole country.
Addressing the members of the Islamic Consultative Assembly, he said: "You should take a commitment from the government not to create the likes of gasoline sedition this year."
The representative of the people of Mashhad, stating that during the Rouhani administration, Borjami's economy lined up against the resistance economy, said: "The example of the resistance economy is sending five Iranian tankers to Venezuela next to the ears of the great devil." The government did not believe that these ships would arrive safely and return, this is the Islamic economic economy.
Karimi Qudussi stated: "Nobakht's report was a good report, but we did not understand what country it is about, because what he reported is different from what is happening on the market floor."
Criticizing the government's economic plans, he said: "These days, you have opened the door to the stock market and are auctioning off the country's assets without any plans." The same speculation in the foreign exchange, gold and automobile markets has shifted to the stock market. What plans do you have for the liquidity market to lead to a jump in production, not speculation?
The MP said: "Mr. Rouhani was a hero, but a hero in the arousal of the people, which we saw in 1996 and 1998 with the fall of the national currency and the number of deaths." Mr. Rouhani was a warrior. He put the jihadist administration and diplomacy of honor, national security, and livelihood to sleep.
Addressing Nobakht, Karimi Qudussi said: "At the beginning of the tenth parliament, you announced that you should not touch the bill to reform the banking system, and we have a plan." Where is your plan Eight years after the 11th government, you have not been able to turn the reform of the banking system into a bill, and you have always been against it.
"Market control is one of the tasks of the government. The price of public currency must be controlled. Transfers in the 11th and 12th governments are full of ambiguity," he said.
https://www.mehrnews.com/news/4940015/%DB%B3%DB%B6-%DB%B1-%D9%85%DB%8C%D9%84%DB%8C%D8%A7%D8%B1%D8%AF-%D8%AF%D9%84%D8%A7%D8%B1-%D8%A8%D8%A7-%D8%AF%D8%B3%D8%AA%D9%88%D8%B1-%D8%B1%D9%88%D8%AD%D8%A7%D9%86%DB%8C-%D8%A8%D9%87-%D8%B3%D9%84%DB%8C%D9%85%D8%A7%D9%86%DB%8C%D9%87-%D8%B9%D8%B1%D8%A7%D9%82-%D9%85%D9%86%D8%AA%D9%82%D9%84-%D8%B4%D8%AF

Quddusi: Rouhani ordered the transfer of $ 36 billion and 80 tons of gold to three gangs that moved to Sulaimaniyah

Quddusi: Rouhani ordered the transfer of $ 36 billion and 80 tons of gold to three gangs that moved to Sulaimaniyah

Twilight News / revealed a member of parliament , Iranian Javad Karimi Quddusi, Tuesday, all ordered earlier issued by President Hassan Rowhani spent converting more than 36 billion dollars US to " gangs " and move in later to the province of Sulaimaniya , in the province of Kurdistan Iraq .
Quddusi's speech came through an intervention in the Iranian parliament session .
The MP from Mashhad Governorate listed the details of a previous meeting that included the National Security Committee in the presence of the then Central Bank Governor , Ministry of Intelligence . Iranian Revolutionary Guards and the Ministry of Economy, and indicated that an audio file and video of this meeting are available .
According to the Iranian Mehr Agency and seen by Shafaq News
He added , " has been announced at this meeting , disclosure of the decision issued by order of President Rowhani, has spent the extraction of 36.1 billion dollars from the treasury of Iran, and was given to three bands for currencies , commodities , and the smuggling of drugs, and went to Sulaymaniyah in Iraq " , according to what came in his speech .
He said , " was also sending 80 tonnes of gold from Iran to this region," referring to Sulaymaniyah .
Details of the news in the Iranian agency