Mourning: We do not allow the flag of homosexuals to be raised on our land, and we call on the Ministry of Foreign Affairs and relevant authorities, and we direct the Committee on Foreign Relations, Endowments and the committees concerned to take the necessary measures against this behavior

The Deputy Speaker of the Iraqi Council of Representatives, Dr. Bashir Khalil Al-Haddad, expressed his strong condemnation and condemnation of the irresponsible behavior of the European Union Mission in Iraq today, Sunday 17/5/2020, by raising the gay and gay flag officially in Baghdad, and asserting his sovereignty over the missions respecting the country's sovereignty and this Transgression is rejected and contradicts our religious and social norms.


Al-Haddad added in the issued statement: "We do not allow the raising of the flag of homosexuals and homosexuals on our soil, and we call on the Ministry of Foreign Affairs and the concerned authorities to follow up on the issue. And to apologize for their actions and not to raise it again, and we will follow the procedures with the parliamentary committees.

On Sunday, 5/17/2020, the Foreign Relations Committee in the House of Representatives condemns the raising of the flag of homosexuality in the embassy of the European Union Mission and considers it a violation of the values, social norms and religious beliefs of the Iraqi people.


It calls on the Iraqi Ministry of Foreign Affairs to play its role in preventing any further abuse occurring in the future by diplomatic missions operating in Iraq.


"We are in the country of the prophets and the infallible, peace be upon them, and in the blessed month of God, the blessed month of Ramadan," he said in a statement today, noting that by a provocative step that went beyond Arab and Islamic customs and traditions, the European Union Mission in Iraq raised the gay flag officially in the Iraqi territories. And based in Baghdad. "


The leftist MP stressed, "We, in turn, condemn and denounce these shameful and contradictory actions against the nature of conservative Iraqi society and attempts to introduce alien cultures against it and which are against morals and religion."


MP Hussein Al-Yasari called, “Mr. Speaker of the House of Representatives to hold an emergency session to respond to these heinous acts.” He called on the Prime Minister to call the European Union ambassadors who did this work at the mission’s headquarters and provide an official apology to the Iraqi people and the Iraqi government and to
bring down this sinister flag.


We, in turn, condemn and condemn these heinous and contradictory actions against the nature of conservative Iraqi society and attempts to introduce alien cultures to it that are against morals and religion.


We call on the Speaker of the Council of Representatives to convene an emergency session to respond to these heinous acts.


We also call on the Prime Minister to summon the European Union ambassadors who did this work at the mission’s headquarters and to present an official apology to the Iraqi people and the Iraqi government and to
bring down this ominous flag.

The Ministry of Foreign Affairs deplores the fact that the European Union and other foreign missions operating in Iraq raise the flag of homosexuality in its headquarters due to the violation of the high moral principles and values ​​respected by all divine religions as well as its contradiction with the values ​​and morals and social norms of our dear country and its provocation of sacred religious feelings and meanings.


On this occasion, we remind all the missions operating in Iraq to adhere to the laws in force in the country, and to nurture diplomatic norms and values ​​prevailing in Iraqi society.

Re: IRAQ -- We do not allow the flag of homosexuals to be raised on our land

Help me out - I'm not clear about this. So do they allow the raising of the gay flag in Iraq?

Re: IRAQ -- We do not allow the flag of homosexuals to be raised on our land

@Ethel Biscuit wrote:Help me out - I'm not clear about this. So do they allow the raising of the gay flag in Iraq?

sorry for the news left behind during the day, currently i'm in work at home, a little late in my work, the reason that i put this news is that in several newspapers over there is the big topic, I took the news directly from the government site, as I already mentioned my goal is to put the news of the day, or get the news of the country during the day, I also try to put government news in the first place, economic news, even agriculture, the reason they produce the food more, then they can export instead of importing food, so it's good for economy, so I always say when construction goes, everything goes !! even in quebec they want to make a third link by building a bridge between the south shore to the north shore, and also a tranway project, the government thinks by sending this project it will start the economy in quebec, so same thing for iraq, reconstruction will start the economy again in my opinion, of course !! I wish you good evening !! 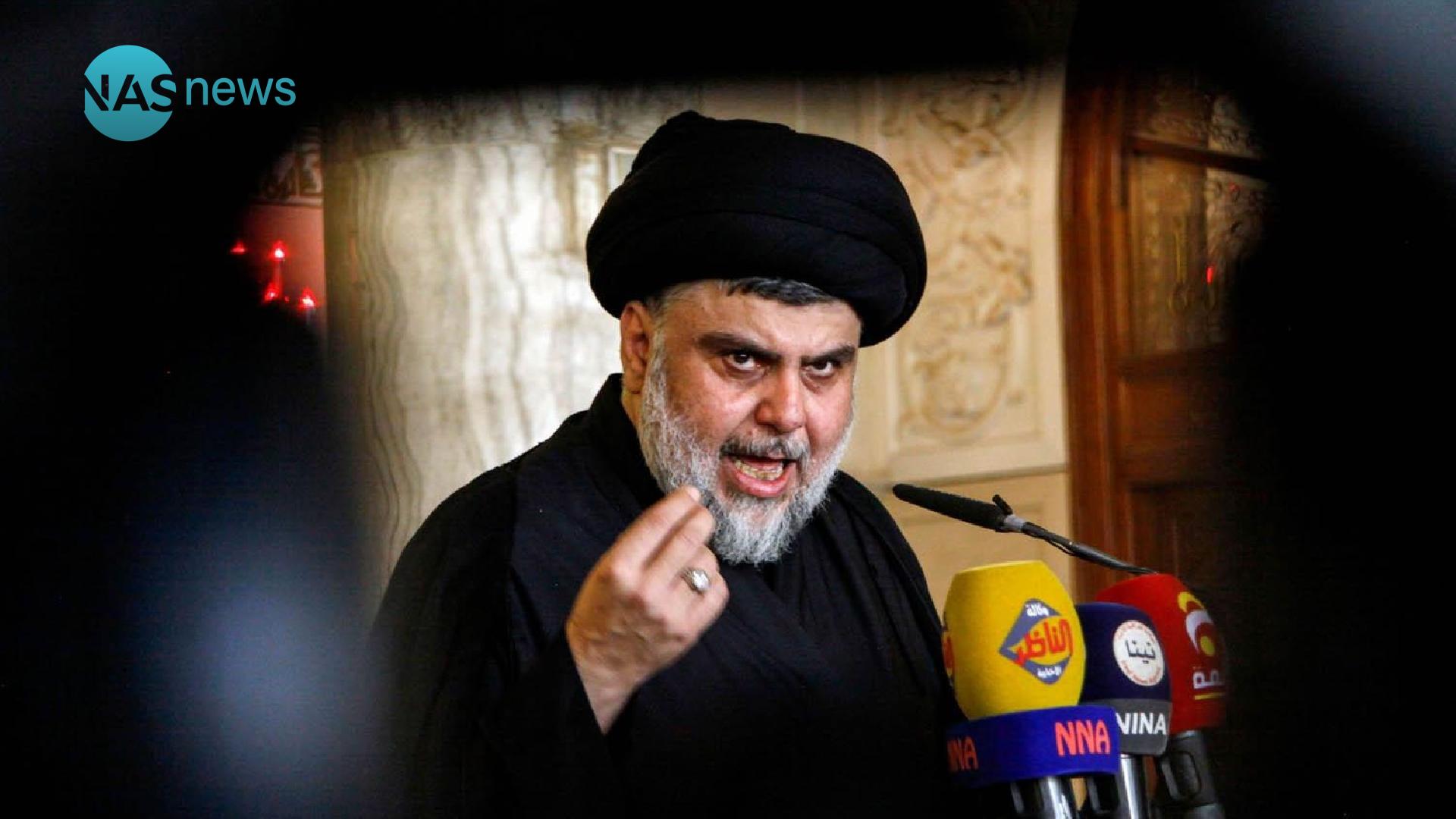 On Monday, Sadr leader Muqtada al-Sadr sent a protest note to the European Union representative in Iraq, against the backdrop of raising the "gay" flag in Baghdad.
And "Nass" (May 18, 2020) obtained a copy of the protest note, stating: "Despite what the whole world is going through from the Corona pandemic, which the endless human being is now unable to stand in front of, and which calls to go to heaven to be gracious with mercy and healing except We find that there are those who want to spread and spread outrage among societies and indulge in corruption, perversion and deviation from human instinct. "
"And we consider what happened today as a blatant attack and a blatant violation by the European Union mission in Iraq, in cooperation with some embassies, raising the flag of the so-called (homosexuals) in the capital, Baghdad, a rude transgression that cannot be tolerated or allowed to be a precursor to other abuses that touch upon considerations Sensitive and ominous, in addition to exceeding the limits of diplomatic norms in force internationally from respecting the culture of others. "
"While we emphasize the human fraternity and the unity of the goals of the tolerant heavenly religions with the diversity of beliefs, we cannot in any way compromise the principles on which our Islamic religion and other divine religions are based and cannot be accepted - under any name it was۔ in violation of the requirements of human instinct that govern With chastity, purity, right behavior, and legitimate relationships between human beings.
Al-Sadr called on the representative of the European Union and the participating embassies to raise (the science of homosexuality), to offer an official and immediate apology, stressing "not to accept tampering with the fundamentals of our culture and beliefs under any pretext." 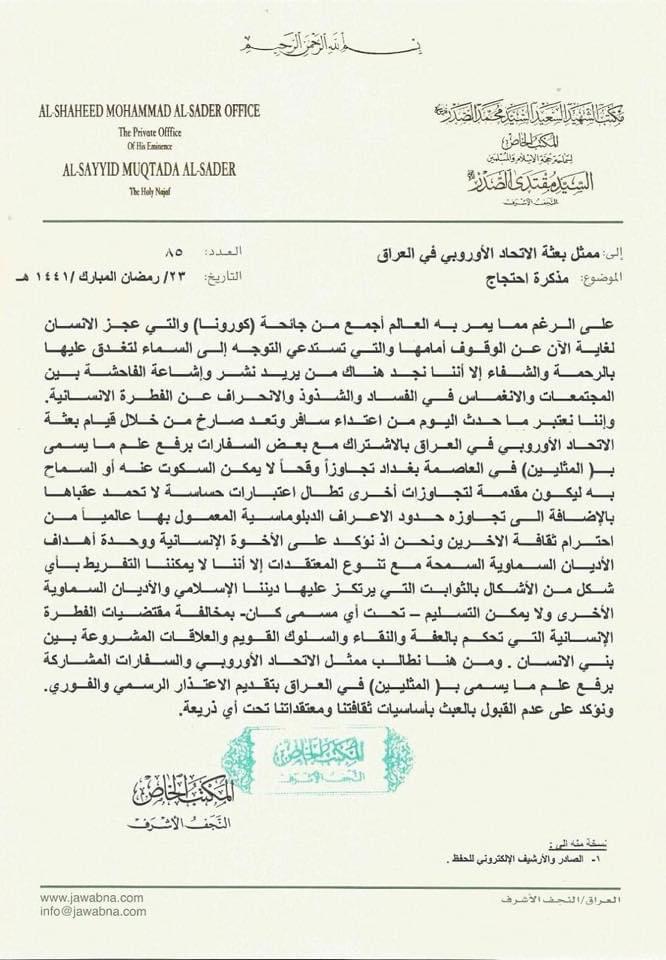 Maliki's coalition objects to the cover of Islamic education for the sixth grade: Contains the colors of 'homosexuals'!

[size=30]Maliki's coalition objects to the cover of Islamic education for the sixth grade: Contains the colors of 'homosexuals'![/size] 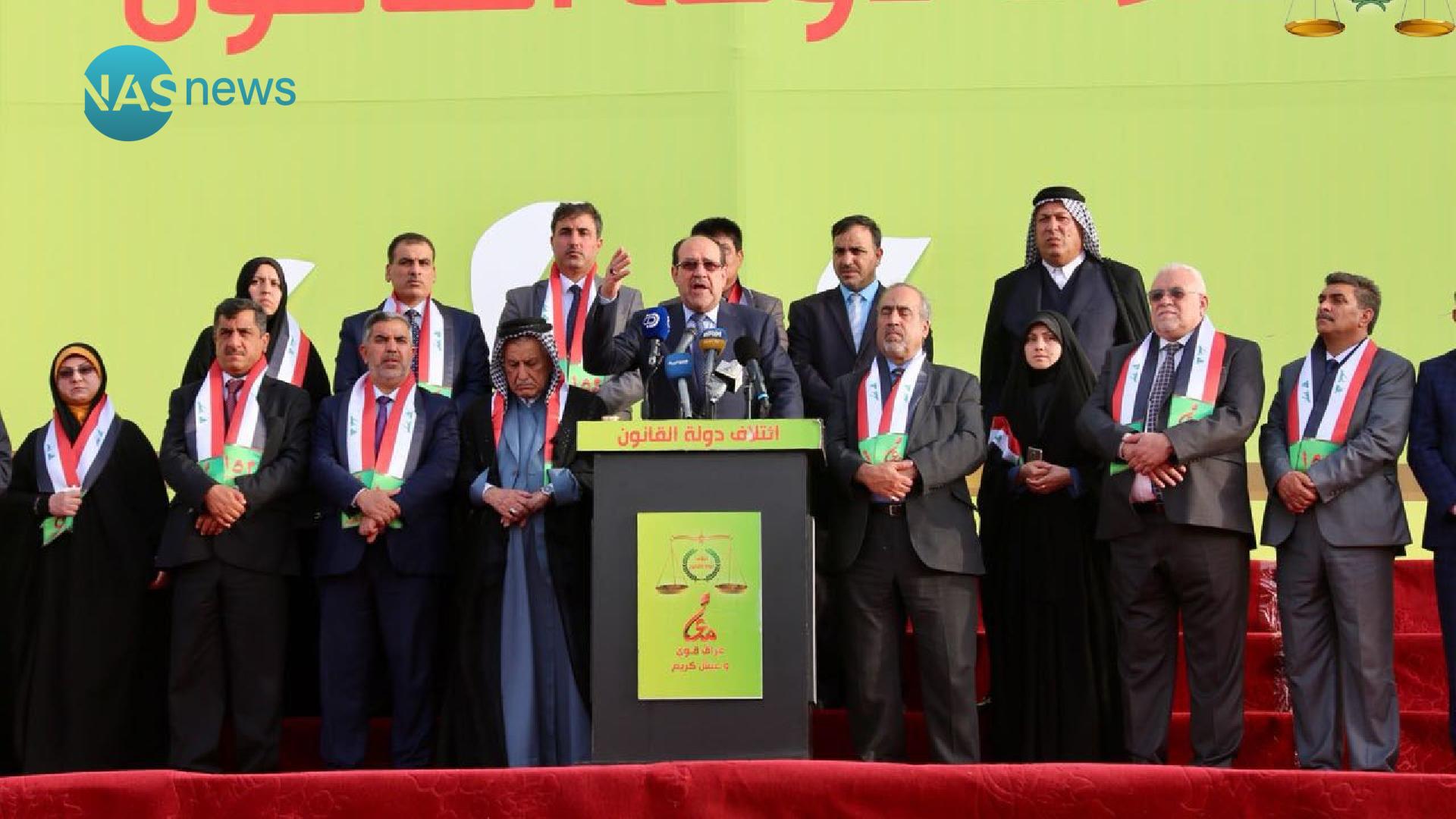 Baghdad-people
Today, Monday, the State of Law coalition submitted an objection to the Minister of Education about the existence of what she said were the colors of homosexuals on the cover of Islamic Education and the Holy Qur’an for the sixth grade. 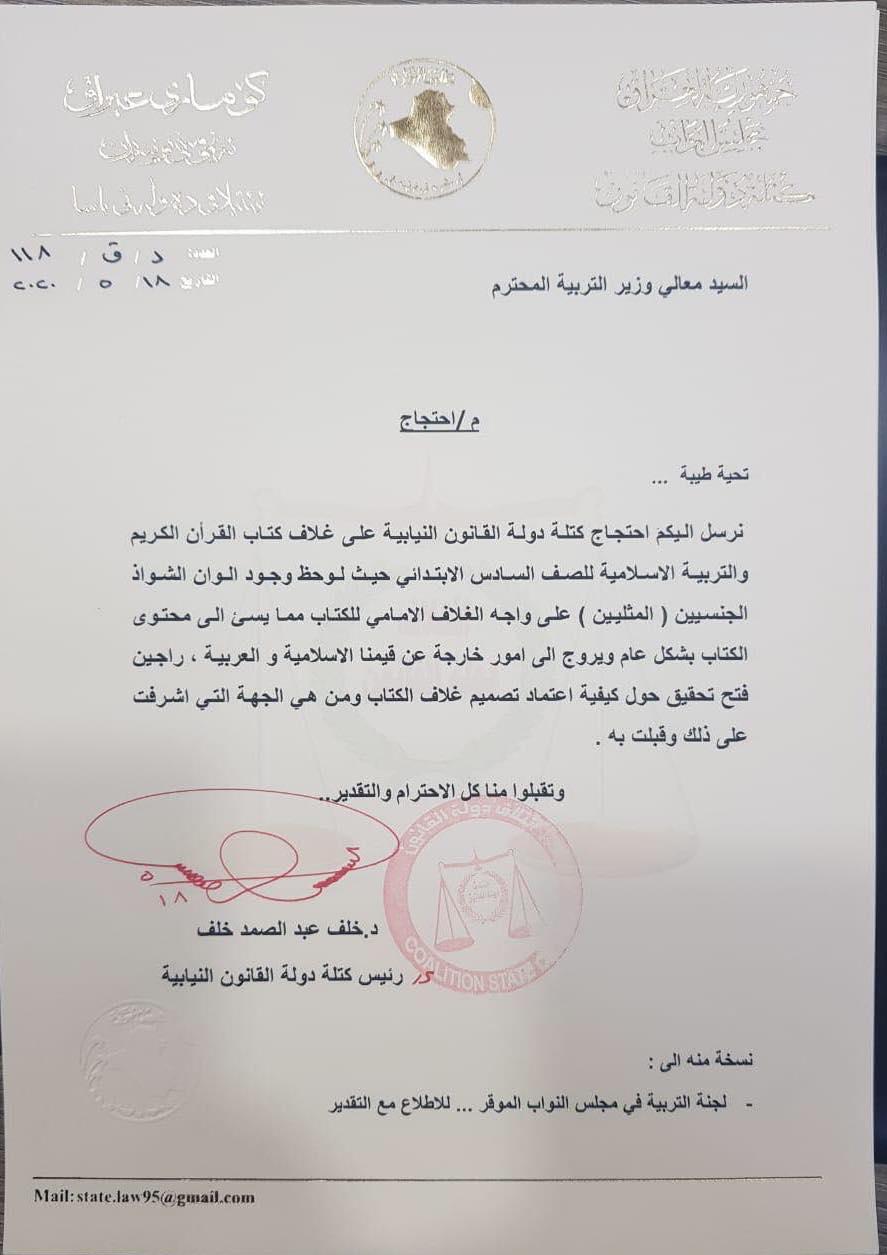 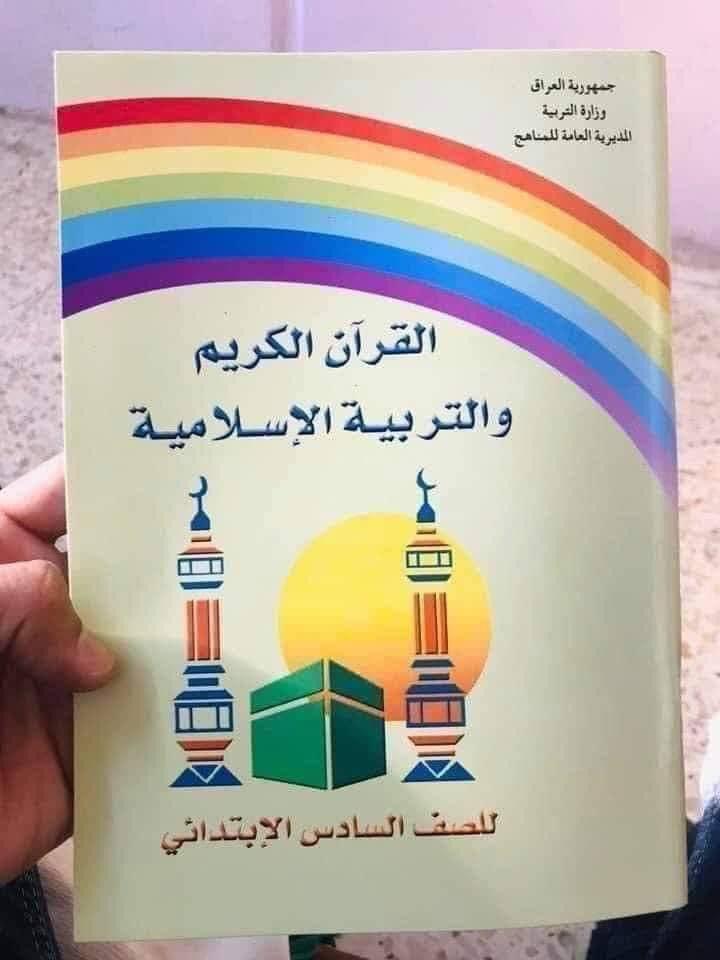