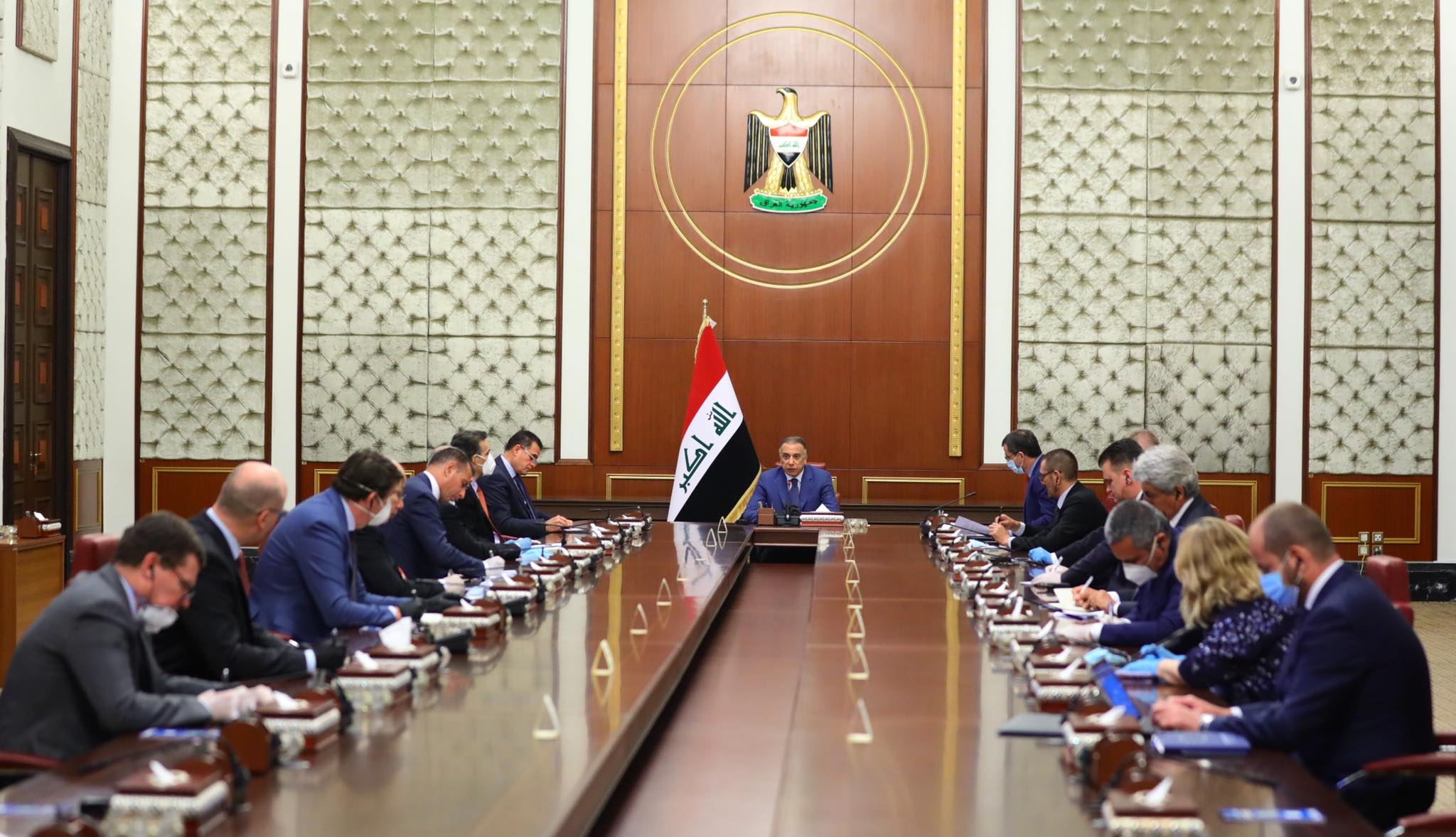 Prime Minister Mustafa Al-Kazimi discussed, on Monday, with the ambassadors of European Union countries, economic cooperation, stressing his government's commitment to holding "those involved in the assault on demonstrators."

Al-Kazemi stressed, according to the statement, that “the union is a friend and partner and we hope that the countries of the union will continue to support Iraq in its war against ISIS and the economic conditions it faces in the aftermath of the Corona pandemic and the decline in global oil prices, and we look forward to helping European countries in Iraq to build its economy,” calling on “European companies to work and invest in Iraq, and promised to overcome the obstacles that may face his work. "

The Prime Minister added that we are "committed to our promises to respect human rights, the right to peaceful demonstrations, protect demonstrators, hold those involved to attack them accountable, carry out the reform process and conduct free and fair elections."

The statement indicated, "The head and members of the European Union delegation congratulated the formation of the Iraqi government and won the trust of Parliament, and stressed the support of Iraqi sovereignty and European interest in the stability of Iraq and the commitment to support its efforts against ISIS and cooperation to face the economic and health crisis, expressing their satisfaction with the government's program of reforms, obligations, dialogue and communication. With the international community. "

» Breitling: "There's an opportunity coming up at the end of October/November that hasn't changed" (Oh? Watch It Change To November/December...Again! LOL) 10/26/21

» MarkZ: "The goal is to then RV or revalue. then reset where everything would move into parity" (Parity??? What An IDIOT GURU!!! Everybody Would Lose Money! Do The Gullible Get It? LOL) 10/26/21

» Barham Salih: The Diyala attack is a despicable attempt to destabilize the country

» Iraq and Brazil discuss cooperation in the economic and cultural fields

» Nechirvan Barzani: It is not possible to create stability in Iraq without restoring confidence between all parties

» The National Approach: The privatization of Rafidain Bank is unacceptable and inconsistent with the law

» The appearance of Muhammad Salih to / NINA /: The surplus oil price revenues will go towards achieving economic and social well-being

» Guru Petra: "Iraq has already lit the fuse with the cessation and removal of the 3 zero notes…A vacuum has been created and “must” be filled soon or there will be confusion in the minds of the citizens" (The Vacuum Is Between The Ears Of The Gurus! LOL)

» Militiaman: "They are openly talking about Retail Digital Currencies, digital cross border payments, etc.." (Who Doesn't Have An ATM Card To Know How This Works? LOL) 10/25/21

» Breitling: "They are reducing the value of the dollar that means they're adding value to their own currency" (Ooops! The Dollar Is Part Of The Reserves. The Reserves Backing The Dinar Gets Reduced Too! LOL) 10/25/21

» NEW GURU SCOTT MOWRY: "We have a possible timeline which already started on October 15th" (Oh Boy! Another Guru Repeating Other Gurus Lies! Is That You Holly? LOL) 10/25/21

» MarkZ: "They have starting exchanging some of the lower denominations in the street. They have already issued the 10 dinar notes" (And Still No Picture Of It! LOL) 10/25/21

» For the second day in a row, CBI sales in the currency auction drop

» The Turkish lira is falling again against hard currencies

» Digital transformation in the central bank and the banking sector

» Militiaman: "The need for them will diminish with a new international exchange rate applied" (What New Exchange Rate? The CBI Isn't Talking About One! LOL) 10/24/21