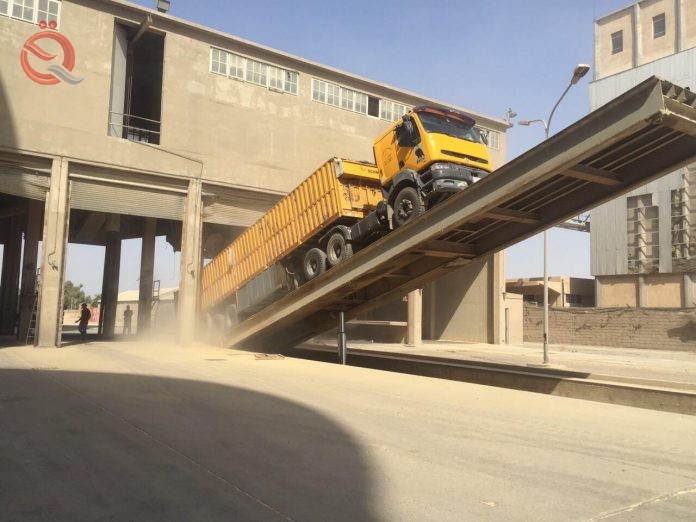 Economy News _ Baghdad
The Ministry of Commerce announced, on Wednesday, that the marketed quantities of wheat crop exceeded 311 thousand tons since the start of the marketing campaign about two weeks ago.
The director of the General Company for Cereal Trade in the Ministry, Abdel-Rahman Aji Tofan, said in a statement seen by "Al-Iqtisad News", "The strategic crop marketing campaign is receiving great attention through field follow-up to the marketing centers of the governorates branches and according to a deliberate plan and an increasing pace, especially in the central and southern governorates."
The flood added, “The marketed quantities so far herald the success of the marketing season,” explaining that Wasit Governorate topped the marketing chart for the governorates with a total of 66,634,940 thousand tons of wheat of all kinds, indicating that “Wasit had opened a new marketing center to absorb the quantities of cultivated wheat. In the region of Dujaili, which is characterized by the cultivation of this crop. ”
He continued that "Dhi Qar Governorate, with its two locations in Nasiriyah and Rifai, received more than 55,000 tons of wheat, while the marketed amount of Samaw Samawah reached more than 29,000 tons, followed by Diwaniya with 27,943,000 tons."
The director of the company explained that the Rusafa silo in Baghdad is also continuing to receive the crop, as it has received more than 4 thousand tons of wheat so far, and the course also started receiving the first quantities that exceeded 92 thousand tons with its first and second grade quality. To follow up the mechanism of wheat harvest, taking into account the implementation of safety and health protection conditions from the risks of the Corona pandemic.

Page 1 of 1
Permissions in this forum:
You cannot reply to topics in this forum
Who is online?
In total there are 138 users online :: 1 Registered, 0 Hidden and 137 Guests :: 2 Bots