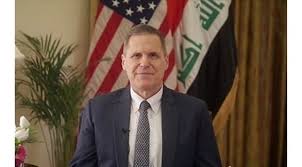 
He sent a message from US Ambassador Matthew Tooler regarding US aid to the health system in Iraq.

"As
the whole world faces the Corona pandemic, the United States continues to stand in line with the Iraqi people, " Toler said in the message seen by Al-Akhbariya . We know very well the power of Iraq as a nation, and we know that the people who are the cornerstone of this strong state are people who are willing, innovative, and resolute. We remain committed to supporting the Government of Iraq and the Kurdistan Regional Government in their fight against this virus.

The support of the US government for the people of Iraq is long-term, unwavering support. We have worked and continue to work in coordination with the Iraqi government, local governments, the United Nations, the World Bank and local partners to meet the needs of the Iraqi people in the most effective and effective way to ensure that they are prepared to address any challenge that may arise.

It is not different from what it is at the moment.

The United States is providing more than $ 16 million to help Iraq respond to the Corona Virus outbreak and is in the process of providing more funds that will be announced in the coming weeks. The assistance we provide will be set up in setting up laboratories and implementing a public health contingency plan in Iraqi border outlets, activating finding affected cases, monitoring disease, providing water and sanitation, health and much more.

To assist the Iraqis in examining the infection with the Coronavirus, we have provided kits with test kits to the central public health laboratories in Baghdad and Erbil, and by the end of April, we hope that we have provided nearly 30 test kits to the laboratories in Baghdad, Erbil, Najaf and Basra. Each kit will include supplies capable of completing 46 individual checks, and we are also purchasing more of these sets.

On the ground, we are working throughout Iraq to support his efforts to tackle the Corona virus. For example, through the US Agency for International Development, we have supported municipalities' efforts to sterilize waste trucks to prevent the spread of the virus and have broadcast work skills training on the Internet to ensure that young people in Quarantine learn about valuable workshops on these skills and have brought the necessary equipment to camps in northern Iraq For the purpose of countering the spread of the virus.

These measures raise the ceiling of support provided by the American people during the past 20 years, including billions of dollars in health aid, which in turn has improved the health systems in the country and strengthened its efforts to counter such an ongoing pandemic. In 2014, the United States succeeded in making primary health clinics in Iraq conform to international standards in terms of supplies, procedures, and personnel, and as part of a project, the United States established two model clinics in each of the 18 governorates of Iraq, after which the Government of Iraq committed to establish similar clinics in Nationwide. In addition to providing direct medical services, these model clinics support a network of sub-clinics by providing laboratory and specialized services that can be accessed through the referral system.

The United States provides more than financial support, we provide specialized technical assistance and training to healthcare providers in the latest technologies and technologies, and we build capacity for health institutions to be managed transparently and responsibly. For decades, the United States has been the world's largest provider of bilateral aid to global health, placing countries like Iraq in a better position to confront a dangerous virus like this, and we have been providing this assistance to support Iraq in its resilience to these malignant influences, whatever their source.

During the extensive support for Iraq for the years 2011-2015 in particular, the United States assisted the Iraqi Ministry of Health in achieving its strategic goal of improving primary health care services, and this effort strengthened health management systems, improved the quality of clinical services, and encouraged community participation in increasing the demand for health care services Preliminary and use.

Our support increases to reach that group still being displaced due to the war against ISIS. Since 2014, the United States has provided about $ 222 million in humanitarian aid in support of emergency health programs. This assistance consists in financing the necessary health care for the displaced and those residing in camps all over the country for the purpose of improving early detection and response to disease outbreaks, enhancing disease control, providing safe drinking water, and distributing personal hygiene tools including toothbrushes, soaps, detergents, shampoo, toilet paper and other necessary tools for use. Everyday.

For example, our assistance has reached a 63-year-old Ahmed, who has been displaced from Al-Muhammadi, who has been living in the Habbaniyah tourist camp since July 2017, suffering from depression as a result of the shock he suffered at the hands of ISIS, but he was hesitant about his treatment.

Healing takes time, and the United States offers its ongoing mental and mental health services to camp dwellers throughout Iraq, including children who need support for their invisible wounds to heal. Finally, with the help of the United States, Ahmed was able to undergo the treatment he desperately needed to return to work.

19-year-old Saud Sami returned to his home in Al-Baaj district after he was staying in Al-Salamiyah 2 camp for displaced persons from inside the country, where basic services are available all the time. He was very happy after learning that he could obtain similar health services in the Ba'aj, which was damaged by the conflict with ISIS and whose health infrastructure was destroyed more than two years ago.

Saud said, "I was afraid of returning to my residential area and not sure I could get basic health services or any other services. However, when I arrived, I was delighted to see the Primary Health Care Center in Al-Baaj, opening its doors, because it is the only health institution that serves people in Baaj and villages. We are pleased with the possibility of obtaining health services and basic medicines, especially as my child is ill. "

In the past four years, the United States has funded the rehabilitation of 26 primary health care clinics and 6 hospitals that ISIS has destroyed, including Tikrit's main teaching hospital, Qayyara Hospital, and Hamdania Hospital. In addition, the US Agency for International Development provided the Nineveh Health Directorate with 20 ambulances.

As for the support provided in 2019, it included the provision of electric generators and fuel for two water plants in the city of Al-Qaim, which led to an increase in the delivery of clean drinking water to three rural communities and the delivery of inspection equipment to the local government authorities in Mosul and Al-Hamdania to ensure the sustainability of drinking water quality.

As for the current year, the US Agency for International Development has cleaned and installed water tanks in 84 schools in western Mosul to improve sanitation and hygiene for more than 60,000 students. In addition, we provided furniture for waiting rooms, hospital beds, and other essential equipment for the Heart Surgery Center in Mosul in preparation to reopen it for the first time since the conflict with ISIS. We also provided generators for 6 health clinics in Hamdania and provided a facility for training health workers.

It is this support that is the culmination of decades of aid that will enable Iraq to overcome this pandemic and rise again as a more empowered and powerful country.

Americans and Iraqis share many ties, and we are together in this severity.

Iraqi President Barham Saleh announced today that the strategic dialogue between Iraq and the United States of America will start next June, after the formation of the government.

President Saleh said, in a press statement, that Iraq currently faces a unique challenge "and we have a political crisis. The government resigned three months ago and we are trying to form a new government and I hope that this government will be formed very soon because there is international agreement on it."

He added that one of the important issues and priorities that the government, after its formation, will have to work on is to start a strategic dialogue with the United States next June.

He explained that the relationship with Washington must be placed in its proper context and in the appropriate form, including the American military presence in Iraq.