I know people are awakening everyday to what the globalists "cabal, deep state" had in store for us but I've been studying it for 40yrs and family and friends just thought of me as the eccentric tinfoil hat oldman who everybody snickered at. It's been a long road of me taking the arrows even though most everybody has been nice to me not calling for me to be institutionalized "THANK YOU" but everything is coming out and will be shown I was dead on 100% that we've been controlled by satanists, pedophiles and psychopaths. In the next month u will learn all of this and will have to look into yourselves to try and understand how u could of let it happen, but that's part of the great awakening. Love All Of You 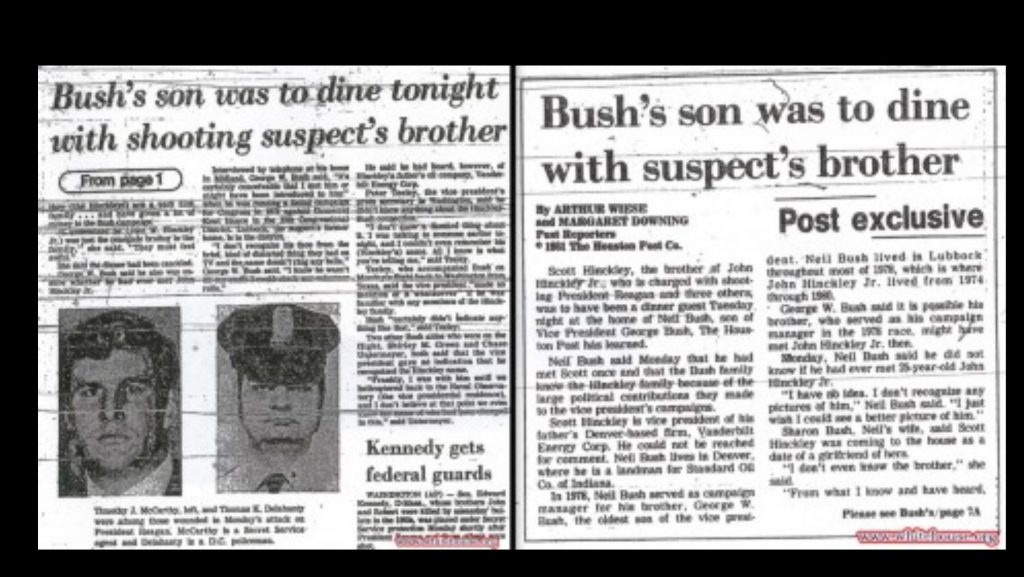 Poppy would have become president if Reagan died, rather than waiting eight long years. He had engaged in a bitter primary campaign against Reagan, who then surprised many people by taking Bush as his running mate. (Richard Nixon, once asked by an aide why he took such an unappealing and unpopular figure as Spiro Agnew as his vice president, reportedly answered, “assassination insurance.” It’s interesting to note that George H.W. Bush similarly chose Dan Quayle, a figure widely considered a “lightweight” ill suited to the presidency, as his running mate.)
In any case, although Reagan survived, Bush for a time served as de facto president — and after Reagan’s resumption of “power,” Bush remained an astonishingly influential vice president, to many, the real power in the country in many respects ever after.
***
Around the time of the shooting of Kennedy in Dallas, the Hinckleys were operating out of Dallas, with offices in the Republic Bank Building, a tower which housed many entities and individuals connected by varying degrees to intelligence activity, including the offices of the mysterious Russian “baron” George de Mohrenschildt (an old friend of George H.W. Bush), who was perhaps the principal influence in the life of Lee Harvey Oswald in the year leading up to the shooting of Kennedy.
In 1978, not long before Poppy Bush’s presidential bid, his son George W. was making his first bid for elective office (with donations from the Hinckley clan). Neil Bush was W’s campaign manager, living in the city of Lubbock.
Another person living there at that time was… John Hinckley Jr. Asked about that by a newspaper reporter, W. commented that it was “conceivable” Neil would have met Hinckley during that period.
As for himself, W. said at the time, “It’s certainly conceivable that I met him or might have been introduced to him. I don’t recognize his face from the brief, kind of distorted thing they had on TV and the name doesn’t ring any bells. I know he wasn’t on our staff. I could check our volunteer rolls.”
Was there any follow-up? Did Bush ever seek to learn more about Hinckley or explain what ways they were or were not acquainted? Not that I can find.
And then there is this: The very day that Reagan was shot, the Reagan-Bush Department of Energy notified the Hinckley family at Vanderbilt oil that the government might be forced to penalize the family business to the tune of $2 million. (AP, April 1, 1981) Was Scott coming to dinner with Neil to try to sort it out? Whatever happened, after John Hinckley shot Reagan, the penalty never materialized.
Neil never did provide a more satisfying explanation of why the shooter’s brother was coming to his house for dinner than that he was filling in as a date for a friend of his wife’s. But who had suggested the dinner in the first place, and who had recommended Scott be one of the foursome? That remains murky.
As for the shooter, here’s what Neil said about whether he knew or had met him: “I have no idea,” he said. “I don’t recognize any pictures of him. I just wish I could see a better picture of him.”
***
In a memoir, Bush aide Chase Untermyer, who accompanied Bush to the unveiling, writes:
I washed up and went to bed for a nap before writing this entry. Around 1:30, I was awakened by a call from Art Wiese of the Houston Post. Art related the possibility that Neil Bush (the VP’s son) may be acquainted with the alleged assailant, John W. Hinckley Jr. Neil and Sharon do know Hinckley’s brother (in Denver) and were planning to have dinner with them tomorrow night. The Hinckleys are a prosperous family, and John Sr. may have been a Bush contributor. Art wanted to know if this connection was known by GB…
As Art pointed out, even a slight Bush connection in this shooting could set off the conspiracy freaks.”….
“What’s up?” GB asked, seeing us all there.
“Did you talk to Neil last night?” Pete asked as we entered the West Basement.
“No; is it about this guy?”
“Yes.”
“Jesus.”
We all went into the VP’s office, where Pete related the story that Wiese had been working on and which was being played big in Houston and over the wires. GB appeared only mildly concerned, so little in fact that he didn’t think to call Barbara or ask any of us to do so.
This should have been one of the most investigated, most heavily reported stories for years after. Certainly, in contrast to the email scandal, Benghazi, Travelgate, and other complex and somewhat esoteric matters that became media rages, lasting on and on and dominating the public conversation, this peculiar Hinckley matter — which by any measure passes all the tests for something worthy of interest by law enforcement — just vanished.
Even when Neil Bush’s involvement in the massive Savings and Loan collapses that dominated headlines in the 1980s was widely reported, no mention was made of the fascinating Bush-Hinckley connection.
To sum up: John W. Hinckley’s brother attends a surprise birthday party at Neil Bush’s house in a period when John Hinckley was suffering serious mental problems. The government exerts financial pressure on the Hinckley family business. Hinckley shoots President Reagan, nearly making Neil Bush’s father the president. The financial pressure on the Hinckleys disappears, George H.W. Bush is in charge of the “investigation” of the shooting, the Hinckleys chalk it all up to their son’s demons, everyone focuses on Jodie Foster, and that’s the end of that.
Coincidence? Sure. Anything, after all, is possible.