The central banks in the world are independent financial and sovereign institutions in the implementation of their tasks and monetary policies and outline their strategy to achieve their goals in supporting the national economy and promoting economic stability in a way that achieves the welfare of society.
After 2003, the Central Bank of Iraq, in accordance with its Law 56 of 2004, followed in the footsteps of international banks, especially after the country passed the economic and financial crisis and security turmoil in 2014 for known reasons.
His role was clear in supporting the national economy and achieving economic resilience and on the occasion of the statement of the Prime Minister of the resigned government to the President of the Republic and the House of Representatives and his declaration that he is going to voluntary absence and will not exercise his constitutional and legal powers due to the political reality that the country is going through now and the attractiveness of choosing a prime minister New to the new interim government after the Prime Minister-designate apologized.
Going to voluntary absence and not forming a new government means that the 2020 budget will delay its approval and that its economic effects will harm the national economy and consequently will harm citizens and construction and investment will stop and it is expected that the planned deficit will rise to the limits of more than 50 trillion dinars with expectations of global oil prices falling to less than 50 dollars a barrel until the third quarter of this year due to the consequences of the Corona virus and slow growth in the global economy and this is certainly in the case of continued economic conditions in Iraq will lead to economic stagnation and then recession after several months and then we will return to square one Which it is suffering experienced by Iraq in 2015.
And considering the essential role played by the central bank at the time when it addressed the economic and security shocks and supported the national economy and helped it withstand good governance and sound policies and applications of monetary policy with daily procedures and mechanisms.
As the Central Bank of Iraq administration, its work team, and its cadres proved that they had a prominent role in promoting economic resilience and taking a steady step towards economic stability through wise and rational efforts and measures in the applications of monetary policy and development policies of the Central Bank in the difficult economic phase of Iraq, they were able to draw a clear roadmap for the goals And aspirations to achieve economic stability and stimulate economic growth through important achievements they achieved during the past five years, the most important of which is to maintain inflation by no more than 2% and a good level of adequacy of foreign reserves within Acceptable rates according to international standards, maintaining the stability of the exchange rate, stimulating the banking sector in an organizational, supervisory and supervisory manner, facing the current political crisis and conditions of popular mobility, and ensuring that the Iraqi banking sector is solid and able to withstand shocks compared to neighboring countries that have gone through the same conditions.
The available data confirm that the critical situation of the Iraqi economy needs the intervention of the central bank to face the new conditions and this requires the new government to believe in the independence of the central bank and not to interfere in the appointment of its leadership and technical and professional cadres during its interim period and until early elections and the coming of a new parliament and government come because the current administration It proved successful in the most difficult of circumstances and saved the national economy from collapse when the Minister of Finance announced in 2015 that the government would not be able to secure the salaries of employees and retirees. Because the focus is on the independence of the central bank and its distance from tensions and Political interests are the solution to overcoming economic crises and achieving economic stability.
* Banking expert 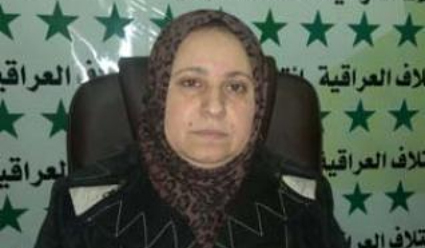 A member of the Parliamentary Economic and Investment Commission, MP Noura al-Bajari.


Baghdad (IraqiNews.com) A member of the Parliamentary Economic and Investment Commission, MP Noura al-Bajari, confirmed on Wednesday that the initiative to revalue and delete zeros from the Iraqi Dinar is ready for implementation by the Central Bank although it will be delayed by five years given the political and security situation of Iraq.

In an interview with IraqiNews.com al-Bajari said “The policy to delete zeros from the Iraqi currency is ready to be executed by the Central Bank, however, its implementation will be delayed by 5 years on the basis of the extreme security and political situation of the country.”

Al-Bajari saidthat the head of the Central Bank of Iraq had previously said that this policy from parliament was accepted and that the zeros will be deleted from the Iraqi currency in the next 5 years.