Urgent: The President of the Republic approves Allawi's resignation and calls on the political blocs to choose an alternative

Urgent: The President of the Republic approves Allawi's resignation and calls on the political blocs to choose an alternative 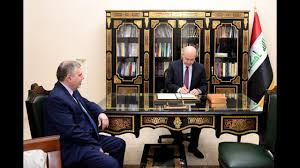 Baghdad / Al-Akhbariya:
President of the Republic Barham Salih agreed, on Monday, to accept the apology of Prime Minister-designate Muhammad Tawfiq Allawi, indicating that consultations will be held to select an alternative to Allawi within 15 days, according to legal and constitutional frameworks.

The President of the Republic commented on Mohamed Tawfiq Allawi's announcement of his apology for the formation of the Iraqi government on Sunday evening, according to the official news agency.

Saleh added that "the alternative personality that will be assigned must have the required acceptance, whether on the popular or parliamentary level."

He indicated that he "will begin consultations to select an alternative candidate for Allawi within 15 days."

The president said: "We call on the parliamentary forces to work hard to reach a national agreement on the alternative prime minister."

Saleh stressed that "the security, political and economic repercussions and health challenges facing Iraq and the world make it imperative to expedite the resolution of the interim government file."

Barham Salih said that "the difficult circumstances the country is going through require a patriotic stance that is responsible for all."

He continued, "The alternative personality that will be assigned must have the required acceptance, whether on the popular or parliamentary level."

Prime Minister-designate Muhammad Tawfiq Allawi apologized for forming the Iraqi government, sending a message to the Iraqi people, to continue to press through peaceful demonstrations so that their sacrifices are not lost.

Allawi added, today, Sunday: "Some parties were negotiating only in order to obtain narrow interests." He added: "Putting obstacles before the birth of an independent government working for the country was clear."

Page 1 of 1
Permissions in this forum:
You cannot reply to topics in this forum
Who is online?
In total there are 177 users online :: 2 Registered, 0 Hidden and 175 Guests :: 2 Bots