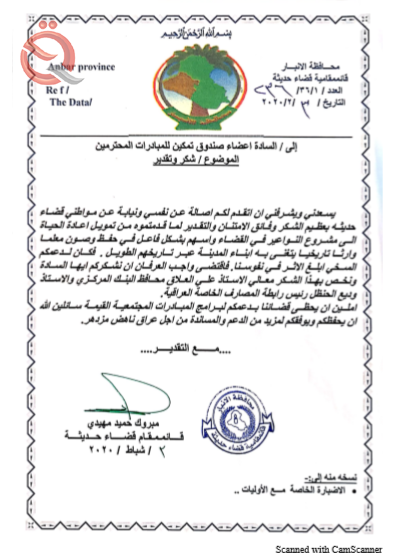 The District Judge of the District of Haditha honored the Governor of the Central Bank of Iraq, Ali Al-Alaq, and the head of the Iraqi Private Banking Association, Wadih al-Handal, with a letter of thanks and appreciation.
The honor came as a result of their efforts to rehabilitate 3 waterfalls in a modern city through the Tamkeen Community Initiatives Support Fund.
The text of the document bearing the signature of the Commander of the Congratulations Hamid Mahidi, obtained by "Al-Iqtisad News", stated that it is "a pleasure and an honor for me to present to you on behalf of myself and on behalf of the citizens of Haditha, with great thanks and great gratitude and appreciation for the funding you provided to restore life to the Nawaier project in the judiciary and shares In an effective manner in preserving and preserving a landmark and historical heritage ... ".
The document continued, "So, the duty of gratitude required that we thank you, gentlemen, and in this particular way we express special thanks to His Excellency Mr. Ali Al-Alaq, Governor of the Central Bank and Mr. Wadih Al-Handal, President of the Iraqi Private Banking Association."