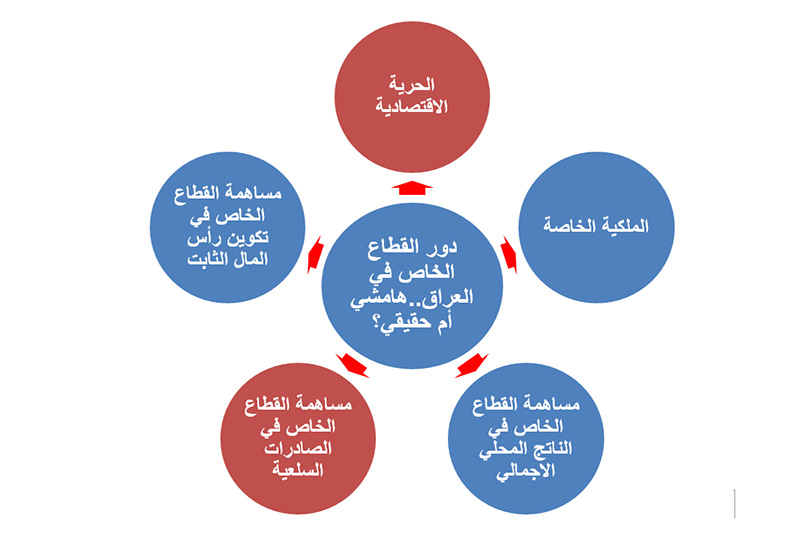 At a time when the private sector plays an important role in light of the supremacy of the capitalist system, it is less important under the rule of the socialist system, because the former regards it as a major pillar in the economy and the second regards it as a secondary one, according to the economic thought that springs from each system.
Given the close interdependence between politics and economics, we always notice that the socialist economic system grows and develops under the totalitarian political system, as is the case of the countries of the former Soviet Union, as well as the opposite, the free economic system grows and develops under the democratic political system, as is the case of the United States, Indeed, the second indicates that the second is better than the first because it still exists and is spreading globally.
Iraq is among the countries that adopted and adopted the socialist system from the fifties of the last century until 2003, when the United States intervened to topple the totalitarian regime politically and economically, meaning that the socialist system continued for more than four decades, which had a great impact in impeding the economic transformation, from State to the private sector, later. This made the role of the private sector in Iraq marginal, not real, as will be evident by examining the indicators shortly.

Why did it have a great impact in impeding the economic transformation?

The adoption of the socialist system by the state means that the state plays a major role in the economy, through its conduct of most economic operations starting from ownership and through production, distribution and consumption and ending with export and import, this role contributed to the emergence of an economic culture in society that is dependency culture and dependence on the state instead of A culture of productivity and self-reliance in the conduct of its economic affairs.
Not only that, but the long term of the socialist system in Iraq contributed to embedding the dependency culture of society and dependence on the state, it is difficult to get rid of it because "someone who grew up with something young on it", it is not enough to get rid of it by dropping the top of the pyramid represented by the totalitarian system in general and socialism in a way In particular, it must be removed from the base of the pyramid, that is, work at the beginning on the social transformation in the field of economic culture, get rid of the culture of dependency and replace it with a culture of productivity and self-reliance instead of dependence on the other, whether it is the father or the state.

In addition, the sudden and dual overthrow of the totalitarian regime in Iraq and the sudden and double embrace of democracy and the market also means the enormity of the dose received by the Iraqi society, which it did not bear, which led to the creation of the disturbances that negatively affected the economic transformation process, because this transformation was not prepared in advance So that it can be received smoothly and seamlessly by the community and interact with it to finally gain its advantages.
Adopting the socialist system, the emergence of a culture of dependency, its continuation for a long period of time, rooting the culture of dependency, and its overthrow in conjunction with the overthrow of the political system from the top of the pyramid without the base of the pyramid, and its replacement by the market economy system in conjunction with bringing democracy to the level of the top of the pyramid without the base of the pyramid. These are the reasons that hindered the process of economic transformation, from the state to the private sector, and made the latter's role marginal, not real, in the Iraqi economy.

Page 1 of 1
Permissions in this forum:
You cannot reply to topics in this forum
Who is online?
In total there are 97 users online :: 2 Registered, 0 Hidden and 95 Guests :: 2 Bots

Most users ever online was 2065 on Mon Apr 09, 2012 2:34 pm
Latest topics
» Economic specialist for / NINA /: Granting licenses to establish banks, making them (shops) their goal to acquire shares of the currency auction

Today at 7:27 am by RamblerNash

Today at 7:24 am by RamblerNash

Today at 7:22 am by RamblerNash

Today at 7:21 am by RamblerNash

Today at 7:19 am by RamblerNash

Today at 7:18 am by RamblerNash

Today at 7:16 am by RamblerNash

Today at 7:15 am by RamblerNash

Today at 7:13 am by RamblerNash

Today at 7:12 am by RamblerNash

Today at 7:09 am by RamblerNash

Today at 7:02 am by RamblerNash

Yesterday at 4:02 pm by GirlBye

Yesterday at 2:18 pm by Mission1st

Yesterday at 2:14 pm by Mission1st

Yesterday at 11:40 am by dinarling