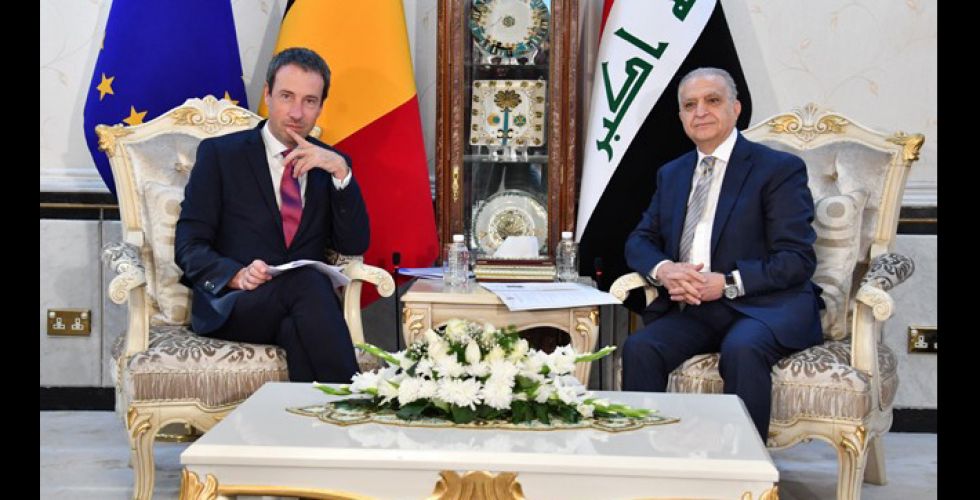 On an official visit to Baghdad, Belgian Foreign Minister Philip Goven met the President of the Republic, Barham Salih, and Foreign Minister Mohamed Ali Al-Hakim, while discussing with them "bilateral cooperation" between the two countries, and supporting Iraqi efforts to eliminate terrorism and reconstruction.

According to a presidential statement, "Al-Sabah" received a copy of it. "The President of the Republic, Dr. Barham Salih, received at the Palace of Peace in Baghdad, Belgian Foreign Minister Philippe Goven.

The President stressed Iraq’s keenness to establish distinguished and developed relations with various countries of the world in accordance with its supreme national interests, mutual respect and non-interference in internal affairs, noting the importance of Belgium's contribution to the reconstruction of liberated cities.

During the meeting, they discussed bilateral relations between the two countries and issues of common concern, as well as a discussion of regional and international developments and situations.

The guest also met with Foreign Minister Muhammad al-Hakim, according to a statement issued by the ministry.

In a statement he made before the media, Minister Al-Hakim clarified that we discussed political, and security developments at the local, regional and international levels, and stressed the importance of everyone's respect for the sovereignty of Iraq, and supporting his efforts to eliminate terrorism and reconstruction.

He condemned the attacks against targets inside the Iraqi territories, usually as a violation of the sovereignty of Iraq and the provisions of international law.

Al-Hakim revealed agreement on the importance of continuing cooperation in the field of combating terrorism and extremism, and working to remove the reasons for the return of ISIS terrorist gangs, cooperation on foreign fighters, and bringing them to justice in accordance with the relevant national regulations.

The Foreign Minister stated that we discussed the regional issues of concern to both sides, including: the developments of the Palestinian issue, expressing Iraq’s position rejecting the so-called deal of the century: that any settlement must guarantee the full rights of the Palestinian people.

He called on the European Union to play a role to guarantee the rights of the Palestinian people to establish a unified and viable state with Al-Quds Al-Sharif as its capital in accordance with international legitimacy resolutions.

Minister Al-Hakim stressed the need to support efforts aimed at easing tensions in the region between the Islamic Republic of Iran and the United States of America to spare the region the threat of any destructive war that has serious repercussions on the region and the world.