Undersecretary of the Ministry of Foreign Affairs, Ambassador Abdul Karim Hashem, meets the Chairman of the Committee on International Relations of the Russian Federal Council

Undersecretary of the Ministry of Foreign Affairs, Ambassador Abdul Karim Hashem, meets the Chairman of the Committee on International Relations of the Russian Federal Council

[size=34]Undersecretary of the Ministry of Foreign Affairs, Ambassador Abdul Karim Hashem, meets the Chairman of the Committee on International Relations of the Russian Federal Council[/size] 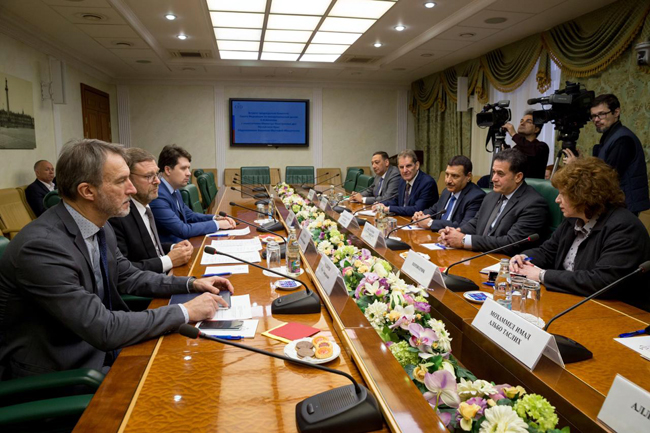 The Undersecretary of the Ministry of Foreign Affairs, Ambassador Abdul Karim Hashem Mustafa, met with Mr. Constantine Kasgev, head of the International Relations Committee of the Russian Federal Council.
During the meeting, they discussed bilateral relations and the opportunities to strengthen them to serve the interests of the two friendly peoples.
Mr. Al-Wakeel praised the Iraqi-Russian relations, as it usually has a long history of understandings, stressing that Baghdad views Moscow as an important partner in the counter-terrorism operation.
Regarding the demonstrations in Iraq, the ambassador explained that it represents a democratic health condition practiced by the Iraqi people to evaluate the political process in Iraq, noting that it contributed to the creation of changes, and that it represents a reflection of the state of popular and democratic awareness that Iraqis have enjoyed after years of change.
They also discussed the political developments in the region, expressing Iraq’s keenness to adopt a neutral policy, adding: Iraq seeks to be a party to calm all parties in the region.
For his part, Konstantin Kasgev confirmed Russia's full support for Iraq in its war against terrorism, offering his congratulations on naming the new prime minister.
Stressing: Moscow is interested in stabilizing the situation in Baghdad, because of its great impact on the stability of the entire region.