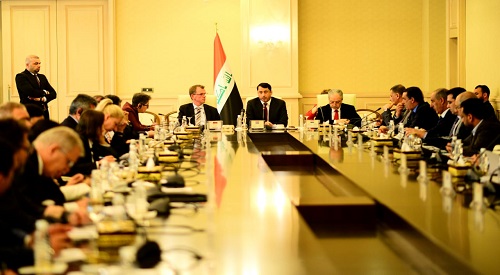 The Secretary General of the Council of Ministers chaired the meeting of the Stabilization Group in the Liberated Territories.

In his speech during the meeting, the Secretary-General stressed that "Iraq has made wide transfers at the relief and humanitarian levels for the success of projects and programs to restore stability and return the displaced to their liberated areas, in partnership with friendly regional and international countries."

He added that the government is proceeding with the implementation of projects and programs concerned with reconstruction, foremost of which is the reconstruction of the liberated governorates, in addition to its tasks in extending peace and security, to achieving the sustainable development that Iraq aspires in various sectors.

The Secretary-General emphasized that the war that Iraq fought against ISIS called for real international support to restore life to the destroyed cities, preceded by efforts at societal reconciliation and fortifying the people of those areas from any future risks and finding radical treatments for them, besides all of that must be given priority to segments Society, especially related to the care of women and children, by implementing specialized projects and programs in cooperation with international organizations concerned in this regard.

The Secretary-General indicated that to implement the foregoing, the Iraqi government has embarked on a set of measures to prevent obstructing joint efforts, most notably the formation of a team from the Prime Minister’s Office, the Department of Non-Governmental Organizations in the General Secretariat of the Council of Ministers and a number of higher bodies to facilitate the work of the international organizations operating in Iraq, as well as Directing the Ministry of Finance on recycling the amount of Iraq’s contribution to the Reconstruction Fund for 2019 to 2020.

The Secretary-General pointed out the importance of following up the commitments of the Kuwait Conference, as Iraq faces a package of urgent needs for reconstruction and needs the necessary allocations to fulfill the ten-year reconstruction plan.

At the end of his speech, the Secretary-General of the Stabilization Team clarified that the Iraqi government is aware of the international concern about the political decision regarding the withdrawal of the coalition forces from Iraq, stressing that this decision is one of the sovereign political decisions approved by the Iraqi parliament and the government is obligated to implement it, but this decision will not prevent it from continuing Joint work with the international bodies to implement stability and reconstruction projects and programs.

The meeting was attended by the German Ambassador (Ole Dell), the Deputy Special Representative of the United Nations in Iraq, Marta Ruedas, representatives of diplomatic missions and international organizations working in Iraq, and the governors of the liberated areas, where they heard and discussed the reality of the liberated provinces, completed projects and those that are in the process of completion.

The meeting concluded with a set of recommendations targeting the areas of security, infrastructure, economics and civil services. 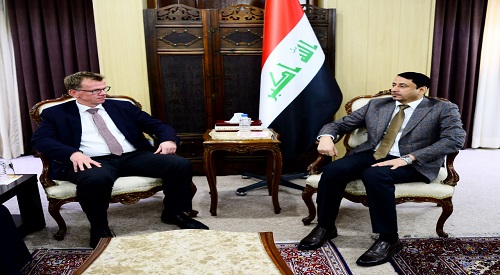 The Secretary-General of the Council of Ministers, Mr. Hamid Al-Ghazzi, assured the German ambassador to Iraq (Ule Del) the Iraqi government's keenness to maintain the relationship with Germany.

The Secretary-General indicated that the Iraqi government appreciates the positive role of Germany in Iraq and distinguishes it from other countries, by increasing its participation more than in 2014, especially with regard to civil services such as support for projects to restore stability in the liberated areas or other services .

The Secretary-General suggested that the periodic meetings (of the Stabilization Support Group) be every three months, and when necessary, that the period between the meetings be less than this, in order to facilitate the mechanisms for implementing the agreed projects.

The German Ambassador (Olli Dell) stressed: The meeting of the Stabilization Group is of great importance from Iraq and the donor countries because of its ambitions to support the liberated areas in the fields of construction and development, and that Iraq has a good reputation in Europe in general and Germany in particular, indicating Iraq’s role in the European partnership from Through his respect and commitment to international standards.

Page 1 of 1
Permissions in this forum:
You cannot reply to topics in this forum
Who is online?
In total there are 101 users online :: 3 Registered, 0 Hidden and 98 Guests :: 2 Bots

Today at 2:10 am by RamblerNash

Today at 1:43 am by RamblerNash

Today at 1:40 am by RamblerNash

Today at 1:30 am by RamblerNash

Today at 1:25 am by RamblerNash

Today at 1:23 am by RamblerNash

Today at 1:20 am by RamblerNash

Today at 1:15 am by RamblerNash

Yesterday at 9:02 pm by Purpleskyz

Yesterday at 5:11 pm by Jayzze

Yesterday at 7:59 am by GirlBye

Yesterday at 7:23 am by Purpleskyz

Yesterday at 6:27 am by Jayzze