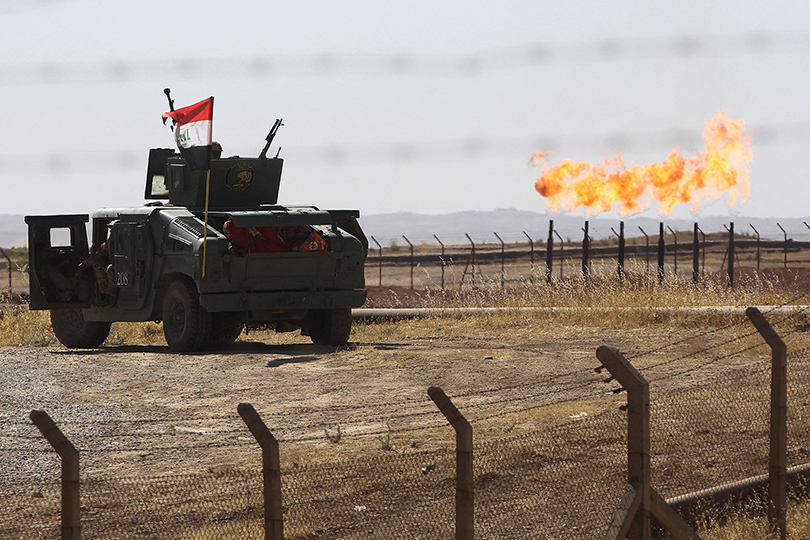 It is known that Iraq possesses a lot of geographic and economic components that contribute to increasing the strength of the economy if it is invested and managed properly.

At the level of geographical constituents, Iraq is located in the heart of the world and connects the two continents, Asia and Europe, and connects the East and West and the meeting place of the Ottoman, Persian and Arab civilizations in addition to the civilizations that arose in it.
At the level of economic constituents, Iraq has a lot of economic resources in the ground, such as oil, gas, phosphates, sulfur, etc., and above it from water, fertile land, mountains, etc., all contribute to raising the performance of the economy if directed in the right direction.
And with all those ingredients that Iraq possesses, but unfortunately its society still suffers pain and suffering as a result of the weakness and fragility of its economy due to many internal political, economic, administrative, social, cultural and other reasons - not from this article - and it should be noted that whatever the external reasons - which we will refer to successively - There is a role in the fragility of the Iraqi economy, but the internal reasons are the main factor behind that fragility, according to what the Algerian thinker Malik bin Nabi said, “You did not colonize you, but they found you capable of colonization.” In a sense, they weakened you except they found you vulnerable.
And external reasons related to the external factor and in particular the regional conflict, such as the conflict between the two sides of Iran and its allies, Saudi Arabia and its allies, and the international conflict such as the conflict between the two sides of China and its allies, the United States and its allies, and certainly that the international conflict extends to the regional conflict, further complicating events and escalation in the region, which is affected by the global economy And regional negative, so the Iraqi economy will be affected automatically, as will be seen later.

The regional and international conflict will further aggravate the situation in Iraq. And the absence of stability in the regional and international environment means the difficulty of the investment movement, which is usually the key to economic development, as the absence of stability, before it creates negative expectations for investors towards the future, would reduce their investments in order to avoid any possible shocks that could occur and affect them negatively, it leads to a rise Production costs and low profits; due to the tightening of procedures and the complexity of the security situation, which requires additional costs and additional time for the practice of investment and production, and this reduces the investor’s desire to invest, low investment and depriving the economy of growth, because the absence of stability in the region’s environment And its international impact negatively on the progress of the economy, even if the ingredients are available internally, let alone if the economy is fragile Iraqi ?! like economics
Certainly, the situation will be worse, as it is known, that Iraq depends on oil in a large proportion in its economy, production and consumption, spending and revenue, export and import, as its contribution exceeds 45% in the gross domestic product, 90% in public finance, and 95% in foreign trade, In other words, the Iraqi economy suffers a blatant exposure to the outside world, due to its loss of productive base and its dependence on the outside world to meet its various consumer and capital needs.
This excessive dependence on oil and the outside world to meet the need of the economy was the reason behind the Iraqi economy mortgaging the external world and its regional and international crises, as oil prices cannot be controlled by the producing country, as it is an international commodity whose prices are determined according to the international market and according to political, climate and other factors.
Since the political, climatic and other factors that affect international markets are not characterized by stability and stability in a world that has become more interconnected today than ever before, what happens on the international scene will affect the regional and local scene, as well as the opposite, i.e. what happens on the local scene will also affect On the regional and international scene, positively and negatively, through several channels, most notably the oil channel, as increasing production in a country negatively affects oil prices due to the increase in the oil supply.
The best evidence for this is the change in oil prices against the background of the tension that the region witnessed in the recent period between the United States of America and Iran, which caused oil prices to cross the $ 70 per barrel barrier after they remained between $ 60 and $ 65, and once the tension decreased Usually oil prices are normal.
In view of the close interdependence between the regional and international environment and oil markets, the Iraqi economy is affected more by the external world than it affects, due to its great dependence on oil and the outside world as we indicated above. automatic.
Therefore, the countries - including Iraq - that depend on oil and the outside world in a very large way must reconsider their economic policies and plans in general and oil in particular, so that they can avoid or limit their vulnerability to emerging crises in the outside world, by building an advanced production base capable of Absorbing crises from the outside world.

In other words, working to protect the self from being affected by external infection, even partially, because leaving things to events will throw us in the wind, and this is not accepted by either a successful mind or a sound logic.

Page 1 of 1
Permissions in this forum:
You cannot reply to topics in this forum
Who is online?
In total there are 99 users online :: 0 Registered, 0 Hidden and 99 Guests :: 1 Bot