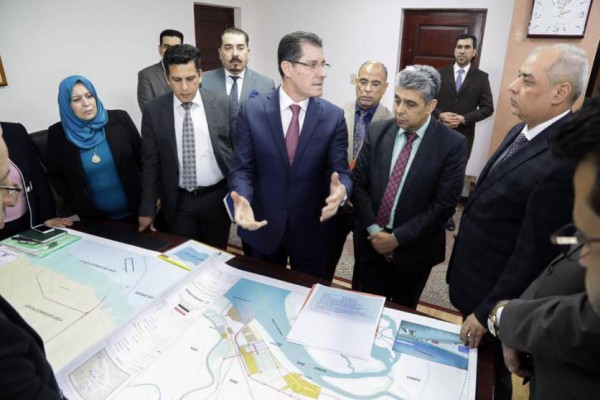 The Ministers of Planning and Transport discuss the completion of the grand FAO project
Laibi: Joining international road transport opens up prospects for global trade cooperation
Baghdad - Time
The Minister of Transport, Abdullah Laibi, revealed the importance of the Republic of Iraq joining the international land transport agreement for the year 1975, after the Iraqi Parliament’s vote on January 13 on the accession bill that will open the horizons of commercial cooperation with all countries of the world that Iraq sought to join a year ago. 2013 and did not have that in time.
He indicated in a statement received (time) yesterday that (the feasibility of Iraq joining the agreement is to facilitate the passage of goods between the signatory countries to the agreement and to encourage local production exports to the country and to upgrade road infrastructure through truck traffic, allowing the establishment of service stations in addition to strengthening relations with these countries).
He stressed that (this step came after the signatory countries ’desire to join Iraq to this international agreement because Iraq has an important geographical location, provided that it maintains all its rights such as meeting the costs of the rival services and transit and completed the work of the border outlets to facilitate the customs procedures to enter the goods into Iraq). He pointed out that (the agreement will enter into force once the agricultural and industrial sectors in the country recover to benefit from it in the process of exporting goods within the global transportation loop Bara).
Meetings
It is noteworthy that the project of Iraq's accession to the agreement came after several discussions and meetings held by the Minister of Transport with senior officials specialized in this regard, where he met earlier with the Secretary-General of the European Union for Road Transport, Umberto de Berto and the Minister of Housing and the Governor of Anbar and discussed with them the means of the project.
In the past, a meeting he had with Umberto on the sidelines of the meetings of the European Economic and Social Council in Geneva / Switzerland and discussed all matters related to Iraq's accession to the International Transport Agreement because of its great importance to the country.
The Minister of Planning, Dr. Nuri Sabah Al-Dulaimi, received in the Cabinet of the Ministry, Minister of Transport Abdullah Laibi, and a statement received (time) yesterday said that (during the meeting, the stages of the completion of the Grand FAO project and the efforts of the Ministry of Planning in providing the necessary conditions for the completion of the project according to international specifications and specific time stages were discussed. for him).
Al-Dulaimi explained during the meeting the endeavors that the Ministry of Planning went in achieving with national and international parties to accomplish the grand FAO project, which represents the most important priorities that will be implemented under the Iraqi-Chinese agreement during the current year 2020, due to the extreme importance of the project to the economy of Iraq), stressing (providing the ministry with an integrated vision that includes providing The allocations and resources needed to complete the project within three years, indicating that the Ministry provides possible facilities for government contracting procedures with the companies that are executing.
Pointing to the project’s contribution to improving the economic and development realities, as it will provide tens of thousands of job opportunities for young Iraqi capabilities, as well as being a stabilizing factor in the region as a global corridor, indicating that the project will include the construction of highways and other railways between southern, northern and western Iraq.
For his part, the Minister of Transport expressed his appreciation for the efforts of the Ministry of Planning in the grand FAO project, and the procedures that the Minister of Planning directed during the meeting, stressing its importance in providing the necessary work requirements for implementation), noting (the strategic importance of the project for Iraq and the region; as it will be among the largest Ten ports in the world in terms of handling that will reach about two million containers annually, pointing out that the last stage of the project will include 46 container berths, 16 other full cargo berths, 20 general cargo berths, and 6 berths for oil derivatives).
A statement received by (Time) yesterday said that (the ceremony is a reading of any wise remembrance and activities of some civil society organizations related to disability affairs, and the head of the commission attended the distribution of shields among distinguished athletes of persons with disabilities, stressing during a press interview that Law No. (38) of 2013 is the gateway The legitimacy with which persons with disabilities were able to obtain privileges and rights guaranteed to them by the law, indicating that Article 3 of the law of the commission stressed the need to join international agreements and covenants for the care of people with disabilities and special needs), pointing out that (the body is supportive of the Paralympic Committee and there is high coordination From Through her international coordinator for sign language.
Disability file
It should be mentioned that the Minister of Labor and Social Affairs, on behalf of Abdul-Zaman, gave priority to the disability affairs file by submitting an integrated plan for integration policy in the society, which was approved by the General Secretariat of the Council of Ministers, through which it became a road map for implementing the vocabulary of the Disabled Law in coordination with the supporting ministries, including the sport file).