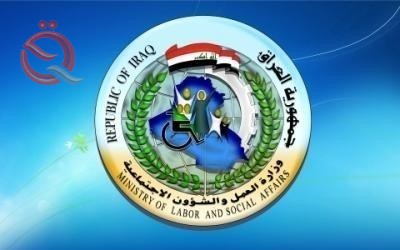 On Sunday, the Ministry of Labor and Social Affairs announced that more than two billion dinars of secured workers and companies in violation of the Labor Law have been collected.
The Director General of the Department of Labor and Vocational Training in the Ministry, Raed Jabbar, said in an interview with his official “Al-Sabah” newspaper and seen by “Al-Iqtisad News”, that the department “obtained more than two billion dinars from the guarantee of Iraqi workers and fines for companies that violate the labor law, especially those in the southern governorates.” .
He added: "The field teams monitored 555 workers between an Iraqi and a foreigner, who were not officially registered with the ministry, and others not covered by social security."
Jabbar confirmed coordination with the Labor Court in Maysan Governorate to issue decisions against seven companies that violate the labor law distributed among the southern governorates.
The Ministry of Labor and Social Affairs has announced the approval of the General Secretariat of the Council of Ministers to increase the salaries of workers guaranteed by 100 thousand dinars, and it has been included in the provisions of the draft federal budget law for the current year.