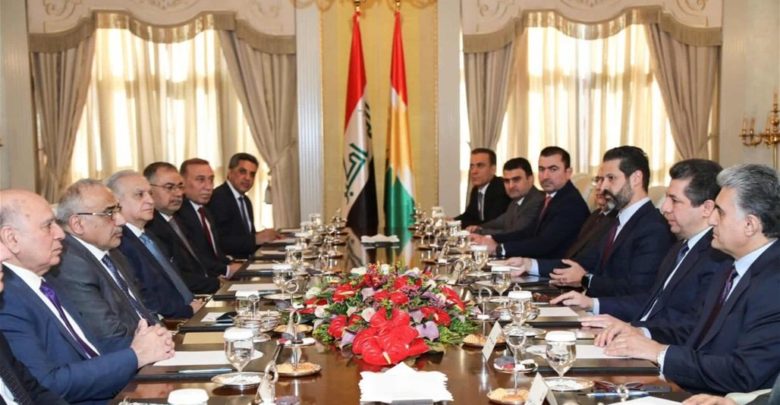 Sources within the delegation of the Prime Minister in the caretaker government, Adel Abdul Mahdi, revealed today, Wednesday, the latter's attempt to raise the issue of handing over Kirkuk governorate to the Kurds in exchange for supporting his assignment to the prime minister again, during his recent visit to the Kurdistan region and a meeting with Kurdish leaders last Saturday.

The sources said, in an interview with "Al-Akhbariya": "The Baghdad delegation headed by Abdul-Mahdi informed the Kurdish forces of its willingness to show flexibility towards the Kirkuk crisis, especially with regard to the return of the Peshmerga forces to it, provided that this is done within a comprehensive agreement to form a new government."

She added: "The Kurdish parties disagreed with Abdul Mahdi's delegation on a number of issues, the most prominent of which was Kurdistan's rejection of the government's decision to remove American forces, which led to the lack of agreement on other issues."

The sources emphasized that, "despite the lack of agreement between Abdel Mahdi and Kurdish officials, politicians from the Arabs and Turkmen express their fear that Kirkuk will become part of the deal to form the new government," noting that "this comes in conjunction with talk of negotiations at the level of High, aiming to reopen the KDP offices "in the province, which were closed after the Iraqi army entered it by order of former Prime Minister Haider al-Abadi in 2017."