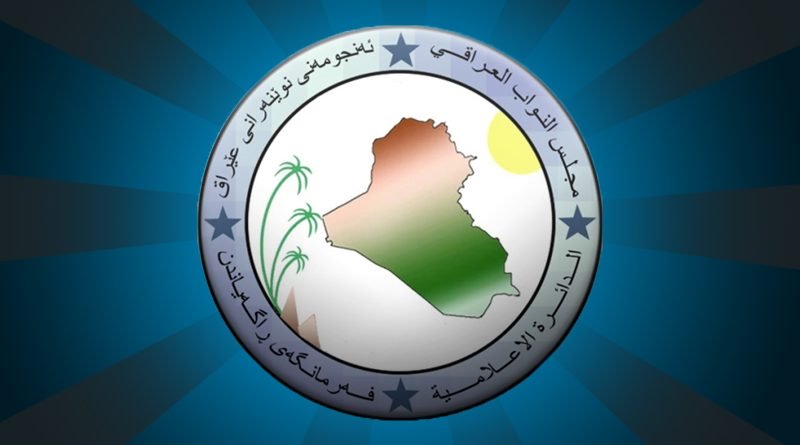 (Reading verses from the Noble Qur’an)

First: Voting on the proposal of the First Amendment Law of the Federal Financial Administration Law No. (6) for the year 2019 (Finance Committee). (4 items).

Second: Voting on the draft law on the accession of the Republic of Iraq to the International Land Transport Agreement of 1975. (Foreign Relations Committee, Services and Construction Committee). (2 items).

Third: Report and discussion (the second reading) of the proposed law for the first amendment of the Iraqi Commission for Accreditation Law No. (78) for the year 2017 (Economic and Investment Committee, Financial Committee). (5 items).

The House of Representatives voted at its twenty-seventh session, which was held under the chairmanship of Mr. Muhammad Al-Halbousi, Speaker of the Council, and in the presence of 184 deputies today, Saturday 11/1/2020, on the proposal of the Federal Financial Administration Law No. (6) for the year 2019 and ended the discussion of the proposal of the law of the first amendment of the Iraqi Authority Law For adoption, while discussing a number of important issues.
At the beginning of the session opened by Mr. Hassan Al-Kaabi, the first vice-president of the council, Mrs. Rasha Yahya Abis Al-Hatimi took the constitutional oath to fill the membership of the council instead of the resigned deputy, Ali Shukri.

After that, a vote was taken on the proposal of the First Amendment Law of the Federal Financial Administration Law No. (6) for the year 2019 submitted by the Finance Committee for the purpose of enabling the Ministry of Finance to apply the law in accordance with the actual expenses of the previous year after excluding unrepeated expenditures in addition to the ministries and governorates being able to continue spending the allocated and funded amounts It has during the previous year to complete the services required of it and ongoing projects, as it is an acquired right for the governorate and the governorate departments with the ministries.

During the session, which was headed by Dr. Bashir Haddad, Vice-President of the Council, the council finished reading a report and discussion of the proposal of the First Amendment Law of the Iraqi Commission for Accreditation No. 78 of 2017 submitted by the Economic and Investment Committees and the Financial Committee.

The interventions of women and gentlemen deputies focused on the necessity of clarifying the reasons behind the need to allocate additional resources from the general budget to the commission that allocates 50% of service wages to cover its revenues.

In its response to the interventions, the committee concerned emphasized that the authority in the original law was self-financed and in the current law its funding will be within the federal budget in order to avoid corruption cases by exploiting some of the private companies for the gaps in order to pass goods outside the standardization and quality control.

The Council discussed a number of issues pertaining to the public affairs, especially those related to the importance of spending financial allocations to complete projects throughout Iraq by giving the House of Representatives the authority to the Council of Ministers to send the federal public budget for the year 2020 to the Council to vote on it as well as the need to give priority in the appointment of wage workers The daily within the departments of the Ministry of Electricity for those who have exceeded 14 years of service, in addition to working hard to achieve a balance for the Kurdish component in a number of state institutions in the province of Kirkuk and work for the fair administrative staff working for free for years within the Wasit Education Directorate.

The interventions dealt with the necessity of working to exclude those with a technical expert degree in state institutions from referring to retirement in the event of reaching the age of sixty years in accordance with the law in force because of an urgent need for their expertise and demand to file a complaint with American officials and who caused the entry of the terrorist organization ISIS to Iraq with the importance of expediting the delivery of dues The peasants, in addition to calling for a move away from emotion while voting on the crucial decisions.

For his part, Dr. Haddad instructed the women and gentlemen deputies and deputy governorate, in addition to the office of the Vice-President of the Council, to follow up on achieving a balance between the components of Kirkuk, calling on the Security, Defense and External Relations Committees to follow up on the request issue by filing a complaint with those responsible for entering the ISIS terrorist organization.