Deputy Speaker of the Iraqi Parliament: The President's speech to the House of Representatives is a "statement of position", not a request to resign

Deputy Speaker of the Iraqi Parliament: The President's speech to the House of Representatives is a "statement of position", not a request to resign

[size=42]Deputy Speaker of the Iraqi Parliament: The President's speech to the House of Representatives is a "statement of position", not a request to resign[/size] 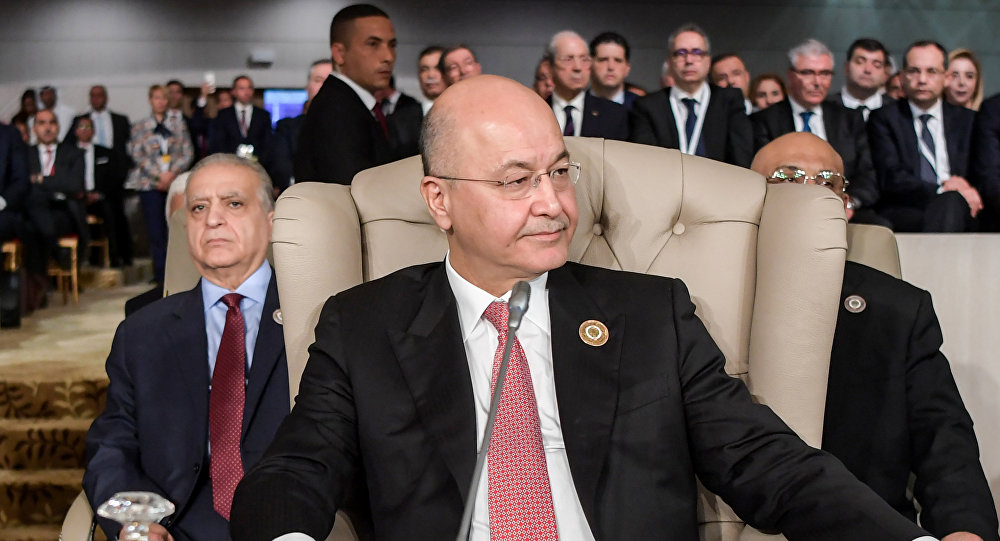 On Friday, Deputy Speaker of the Iraqi Parliament, Bashir Al-Haddad, said that the President's speech to the Presidency of the Council of Representatives is a statement of position and not a formal request for resignation.

He called in a statement mourning "everyone to give priority to the logic and language of reason and wisdom to spare the country further tragedies and problems," according to the site "Alsumaria News".
Al-Haddad added: "Political leaders and heads of blocs and national parties should cooperate with the President of the Republic to resolve the candidate for the largest bloc of the Prime Minister according to the data of the current stage and the continuation of popular demonstrations in Baghdad and a number of governorates."
Al-Haddad stressed: "The candidate must obtain the consent and acceptance of the masses on the basis of the political agreement and what the higher national interests of the country require, especially as we are going through a detailed stage and a political crisis."

He continued: "The President's speech to the Presidency of the House of Representatives is a position statement and not a formal request for resignation," noting that "what Saleh mentioned in his letter is an explanation of the pressures that occurred and his willingness to submit the resignation due to the political stranglehold and failure to agree on a candidate for prime minister, It is a real complex crisis in the political scene. "
Al-Haddad appealed to "everyone to prevail over logic, language of reason and wisdom to spare the country more tragedies and problems," noting that "if the President of the Republic submitted an explicit written request for resignation, then the request will be dealt with according to Article (75) of the Iraqi constitution."
Yesterday, Thursday, the President of the Republic announced his readiness to resign before the members of the House of Representatives , while he apologized for assigning the building block candidate to head the next government, Asaad Al-Eidani.
The protesters announced, during the sit-in squares, that they are the largest bloc in choosing the candidate to head the government , while the political blocs struggled to adopt the largest to submit the candidate with the abdication of the other clerics, the leader of the Sadrist movement, Muqtada al-Sadr.
The protesters waved in their songs, which they documented in a form suspended in a small model overlooking the liberation tunnel, for the Presidents of the Republic, Barham Salih, and Parliament, Muhammad Al-Halbousi, that the role would include them in the dismissal, after the demonstrations prompted the Prime Minister, Adel Abdul-Mahdi, to submit his resignation.
https://arabic.sputniknews.com/arab_world/201912271043894207-%D9%86%D8%A7%D8%A6%D8%A8-%D8%B1%D8%A6%D9%8A%D8%B3-%D8%A7%D9%84%D8%A8%D8%B1%D9%84%D9%85%D8%A7%D9%86-%D8%A7%D9%84%D8%B9%D8%B1%D8%A7%D9%82%D9%8A-%D8%AE%D8%B7%D8%A7%D8%A8-%D8%A7%D9%84%D8%B1%D8%A6%D9%8A%D8%B3-%D9%84%D9%85%D8%AC%D9%84%D8%B3-%D8%A7%D9%84%D9%86%D9%88%D8%A7%D8%A8-%D8%A8%D9%8A%D8%A7%D9%86-%D9%85%D9%88%D9%82%D9%81-%D9%88%D9%84%D9%8A%D8%B3-%D8%B7%D9%84%D8%A8%D8%A7-%D9%84%D9%84%D8%A7%D8%B3%D8%AA%D9%82%D8%A7%D9%84%D8%A9/