Iran accuses the President of Iraq of plotting its influence

Iran accuses the President of Iraq of plotting its influence 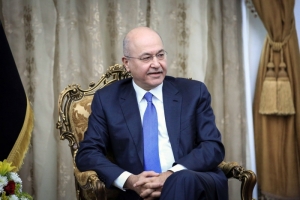 BAGHDAD - Tehran launched a swift campaign against Iraqi President Barham Salih, accusing him of colluding with the United States, Israel and the Gulf to install a new Iraqi prime minister against Iranian influence in his country.

The campaign against the Iraqi president began when he asked the parliament about the largest bloc, which is supposed to present him with a specific candidate who will be assigned to form a government, according to the constitutional contexts, as this step was considered an attempt to get rid of the responsibility and implicate the parliament in an endless cycle.

According to the Iranian vision, Barham Salih must consult in full confidentiality with its representatives in Iraq to choose the new prime minister, then announce his assignment, without going into details.

In light of the continuing angry protests that overthrew the government of Adel Abdul Mahdi, obedience to the Iranian vision for the Iraqi president is a political suicide, so Barham Salih seemed to be trying to appear to oppose Tehran's directions in this file.

Instead of going into some private meetings before the new candidate's agreement is finalized, Saleh has been holding public meetings and seminars to determine the characteristics of the new prime minister, placing the conditions of the demonstrators at the top of his priorities, which angered the Iranians and led them to accuse the president of including a plan to facilitate the takeover of a figure close to the United States and countries The Gulf is in power in Iraq, taking advantage of the massive popular protests.

And two days ago, Iraqi parties and pro-Iranian militias have no talk except betrayal of Barham Salih, his malicious movements and his leadership, an international conspiracy to overthrow the regime in Iraq, and provide a safe environment for US forces to remain in this country.

The Hezbollah Brigades, the Iraqi branch of the Lebanese Hezbollah guerrillas led by Hassan Nasrallah, said, “We were aware that suspicious parties had worked to exploit (protests) and ride their wave, in order to implement devilish plans that were not related to the problems and crises that the people suffer.”

She pointed out that "in the midst of the ongoing political movement to choose a personality who will assume the presidency of the prime minister and who have characteristics commensurate with the critical stage the country is going through, we believe that the person who is running for this responsibility should have patriotism, integrity, and non-submission to the whims and partisan and factional tendencies, (...) And to have the courage and courage to stand in the face of the malicious Zionist-American project in Iraq. ”

The Hezbollah Brigades, which was founded by the Deputy Chairman of the Popular Mobilization Authority, Abu Mahdi al-Muhandis and managed directly by the commander of the Quds Force in the Iranian Revolutionary Guard, Qassem Soleimani, added, “There is no doubt that the failure of political forces to present a candidate for prime minister within the prescribed period is an indication of lack of seriousness and inaction. And this will open the door for a lawmaker before the President of the Republic to assume responsibility, taking advantage of the multiple gaps in the constitution and its interpretations, in harmony with the American project aimed at imposing political tutelage on Iraq.

Given that one day remains of the constitutional deadline granted to the president to choose a candidate to task him with forming the new government, the Construction Alliance, which includes the leaders of the armed Iraqi militias in addition to the State of Law coalition led by Nuri al-Maliki, has prepared a plan to ensure the embodiment of the Iranian vision, or at least disrupt any counter to her.

The plan includes proposing the name of the former communications minister, Muhammad Allawi, to be a candidate to form the government, and if Saleh does not agree, Qusay al-Suhail, a member of the State of Law coalition led by Maliki and the Minister of Higher Education in the current government, will be offered a name.

In the event that Saleh Al-Suhail also refuses, the Construction Alliance will leave him to assign any candidate to form a government, to be aborted in Parliament, using Iranian influence.

And the Iraqi political forces loyal to Iran appear determined to nominate their representatives to form the next government, or at least guarantee their interests in the transitional phase, which is supposed to witness early elections.

Representative Naim al-Aboudi of the Asaib Ahl al-Haq movement led by Qais Khazali ruled out assigning a candidate from the "independent technocrat" to form a government, despite being one of the most prominent demands of the demonstrators, citing that the government's experience with this type had previously failed.

But Al-Aboudi admits that passing a party candidate at this time is very complicated, so perhaps a political mandate independent from the current power parties is formed to form an interim government that will last for one year, and he is supposed to witness early elections.

Iran faces a real impasse in the level of its management of the political process in Iraq. The choice of a prime minister for the next stage, whose government must be transitional to administer the country and prepare for early elections, is the most prominent indication of that impasse.

And things are not the same as they were in the past after the protesters imposed their presence on the political class, as they are the body that endorses any personality that is nominated to fill that position.

Here, the role of secret consultations and settlements that were mainly between political blocs under Iranian auspices and direct supervision by Qasim Soleimani ended.

An Iraqi political observer said that the demonstrations ravaged the whole scene, and the candidates are falling one after the other, without the dominant parties being able to control the power that they might face from "popular conspiracies" intended to trim their nails and reduce their domination of power, which is the local face of Iranian hegemony.

The observer added in a statement to “Al-Arab”, “If Barham Salih had ended in a conviction that he distanced himself from the game of tug-of-war between protesters and parties, because he had realized that he could not manage this game and that many things had escaped from the control of parties that were no longer Able to impose a prime minister who fits its direction. ”

It is expected, according to the constitution, that matters will return to the President of the Republic to perform the functions of the Prime Minister in the transitional period, which will finally block the door for Iran, so that it will have in what could be done by a step such as ending the work of Parliament and preparing for early elections in the context of a new electoral law.

The observer pointed to what scares the militias loyal to Iran to be stripped of their gains and privileges obtained through their direct and indirect presence inside the governmental body, which I meant by talking about the existence of a conspiracy that the President of the Republic is a party to.