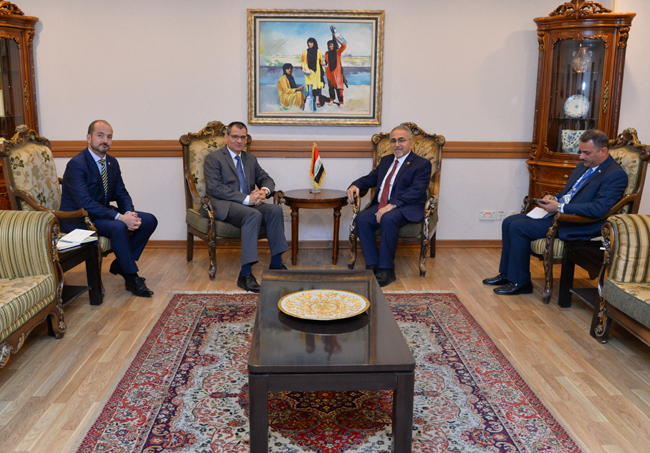 Head of Europe Department received Ambassador d. Ismail Shafiq, head of the EU mission in Baghdad, Martin Heath, and his deputy, John Bernard Bolivan.
The two sides discussed ways to strengthen bilateral cooperation, including: the importance of activating the terms of the agreement of partnership and cooperation signed between Iraq and the European Union, and the resumption of political dialogue between the two sides as soon as possible, as well as the subject of holding the meetings of the subcommittees emanating from the agreement at timings to be agreed upon later.

Page 1 of 1
Permissions in this forum:
You cannot reply to topics in this forum
Who is online?
In total there are 100 users online :: 3 Registered, 0 Hidden and 97 Guests :: 2 Bots

Most users ever online was 2065 on Mon 9 Apr - 14:34
Latest topics
» Credit rating .. Iraq is among the countries with the highest risk

Yesterday at 18:43 by RamblerNash

Yesterday at 18:42 by RamblerNash

Yesterday at 18:41 by RamblerNash

Yesterday at 18:40 by RamblerNash

Yesterday at 18:38 by RamblerNash