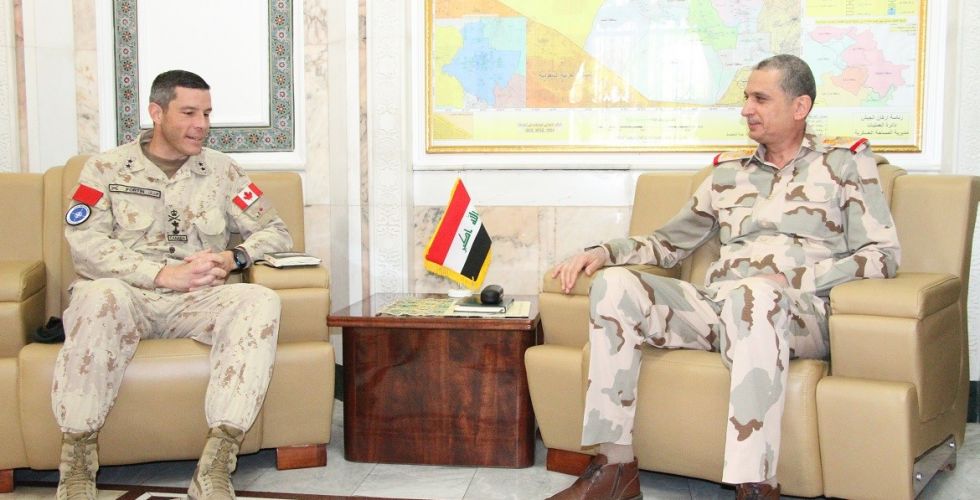 Baghdad / morning
Army Chief of Staff Lt. Gen. Othman Al-Ghanmi said during his meeting with the head of the NATO mission in Iraq, Gen. Jardin Cardenia, that the Ministry of Defense will provide all support and encouragement in order to further enhance cooperation, partnership and coordination between
Sides.
"Al-Ghanimi, bid farewell to the head of the NATO mission in Iraq, General Danny Fortin, wishing him success and success in his work," a ministry statement said.
Next".
The statement added that "the Chief of Staff praised the work of the mission during the previous period, which added a lot of capabilities and expertise to our security forces of all kinds."
For his part, General Danny Fortin, according to the statement, "pleased with the time he spent the head of the mission in Iraq and the establishment of strong relations with commanders and officers will remain firm
he have".
The statement pointed out that "Al-Ghanimi received General Jenny Cardenia, the first woman to assume this position (head of NATO mission
in Iraq)".
"I wish you success and success in your next work. In turn, we will provide you with support and encouragement to sustain enhanced cooperation, partnership and coordination between the two countries," he said.
Sides. "

BAGHDAD: Defense Minister Najah al-Shammari discussed with NATO's new commander in Baghdad, arming and training Iraqi forces.
The Defense Ministry said in a statement received (Euphrates News) a copy, that "Shammari met today Commander of the joint forces in Naples, General James Fogo and the head of the NATO mission in Iraq, Gen. Jenny Cardinia and their accompanying delegation, during which they discussed joint cooperation in the field of training, armament and capacity ".