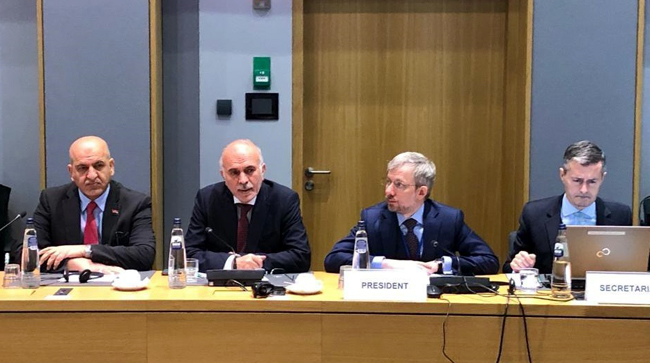 The Ambassador of the Republic of Iraq to Brussels Sadiq al-Rikabi met with the expert group on Middle East and Gulf issues in the European Union Council. The agreement early next year will be preceded by a political dialogue meeting between the senior undersecretary and the secretary general of the European External Action Directorate.
He also touched on Iraq's balanced positions on the political situation and tensions in the Middle East and the world in general, and its impact on Iraq, calling on the European Union to take its role in calming the situation in the region and supporting Iraq in the field of reconstruction.
In the fight against terrorism, he stressed that Iraq's political and security instability would cast a shadow on Europe.
He also touched on the latest developments in Iraq, pointing out that the right of demonstrations is guaranteed by the Iraqi constitution, noting that the government issued packages of decisions in response to the demands of the demonstrators, calling on the EU countries to invest and support the private sector to provide job opportunities for the youth segment.

Page 1 of 1
Permissions in this forum:
You cannot reply to topics in this forum
Who is online?
In total there are 77 users online :: 0 Registered, 0 Hidden and 77 Guests :: 4 Bots