Iraq sponsors an international conference on economy and technology

Iraq sponsors an international conference on economy and technology 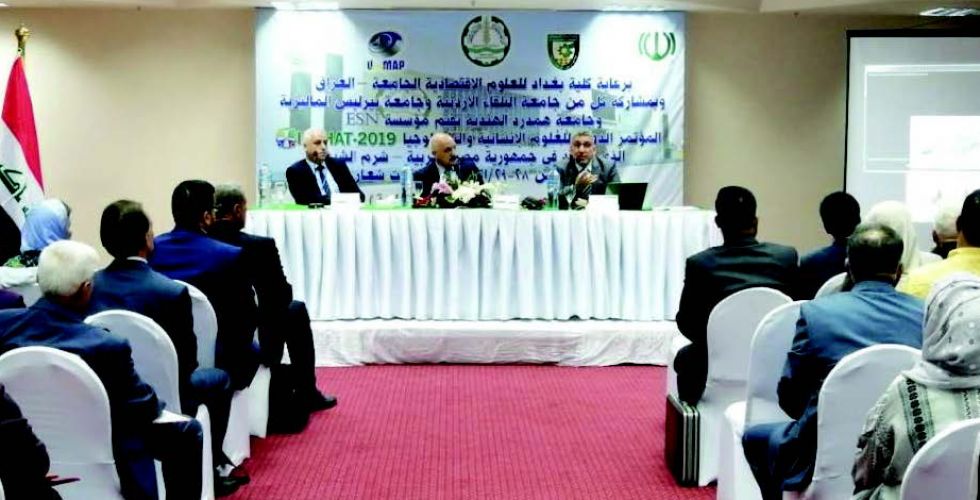 Baghdad / Follow the morning
Iraq sponsored the first international conference for humanities and technology held in Egypt, in cooperation with the universities of Balqa, Jordan, India, Malaysia and Perlis Malaysia, and discussed various economic and scientific axes such as the impact of climate on food pollution, energy field.

Well-known academic figures at the local, Arab and international levels participated in the conference, which was held under the auspices of Baghdad College of Economic Sciences, University of the Ministry of Higher Education and Scientific Research, in Sharm el-Sheikh for the period from 28 to 30 October.
Smart.

Chairman of the Honorary Conference, Dean of Baghdad College of Economic Sciences, Prof. Dr. Lebanon Hatif Al-Shami, delivered on his behalf the head of the Iraqi delegation participating in the conference, Dr. Adel Salman, said: ) In Sharm el-Sheikh, and to meet this respected scientific elite. ”

He added that this conference is an effective step towards the extension of cultural and scientific relations between universities and colleges around the world, which encourages everyone to move forward to find such opportunities produce such meetings to serve science and learners at all levels.

He explained that “the conference aims to present and present an analytical vision in the humanities, business and economic sciences, applied sciences, engineering and information technology and systems, and the developments that follow these sciences and their impact in the wheel of progress.
Human. ”

He continued, “In accordance with the directives of the Ministry of Higher Education and Scientific Research, on the exchange of experiences and the holding of international conferences, this international scientific conference on humanities and technology is being held through the distinguished efforts of the preparatory and scientific committees.
Conference".

The conference committees include many distinguished personalities from Iraq, Malaysia, India and Jordan.
He explained: “The conference dealt with many scientific researches that have been distributed between several axes, through which we look forward to making this research important starting points of interest in our daily lives.”

He pointed out that "the conference included axes in medicine, technology, economics and humanities, such as the impact of climatic elements in food pollution, energy field, and the duality of the criminal text, and the advancement newspaper page of Libya's cultural history in the Ottoman era, and the impact of radiation therapy on critical areas (heart, liver, Lung) for breast cancer patients. " At the end of the conference, certificates were distributed among the participants
And researchers.

Page 1 of 1
Permissions in this forum:
You cannot reply to topics in this forum
Who is online?
In total there are 189 users online :: 1 Registered, 0 Hidden and 188 Guests :: 3 Bots