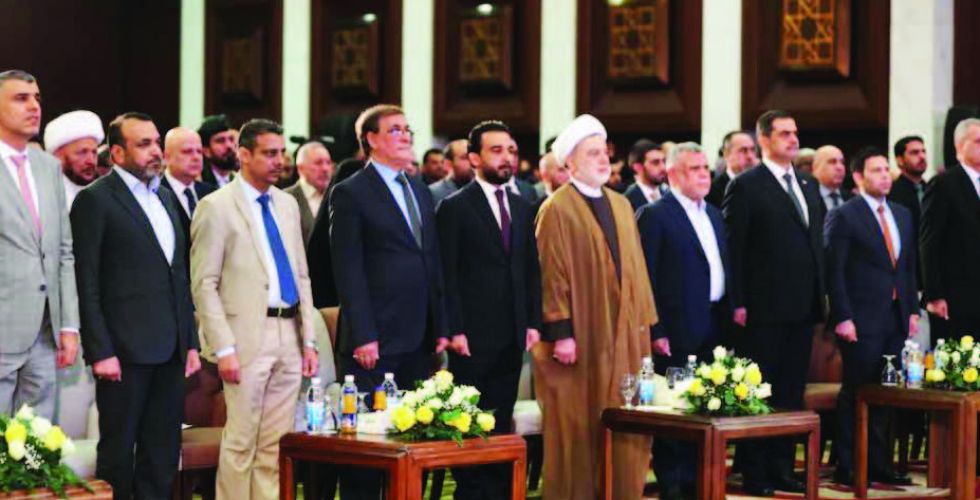 In a speech during the celebration organized by the Supreme Islamic Council on the 38th anniversary of its founding and attended by Al-Sabah, Speaker of the House of Representatives Mohammad Al-Halbousi recalled the struggle of all Iraqi political movements. The Supreme Islamic Council Hammam Hamoudi, a national strategic framework for the Council, called on the Minister of Health Alaa Alwan to withdraw his resignation and build a ministry away from corruption.

Al-Halbousi said: “As we celebrate and celebrate this anniversary, recalling the struggle of all Iraqi political movements, we find ourselves obliged to protect the achievement achieved by perpetuating the reform process, confronting corruption, achieving state-building and responding to the demands of the citizen in a free and dignified life. The struggle and their brothers who have risen martyrs in the face of terrorism », stressing that" today we face a difficult test in the face of circumstances and challenges and we have to be the size of this responsibility. "

"We are required to protect Iraq from the repercussions of the regional conflict on the one hand, and to achieve security and services internally on the other," Halbousi said, calling on the government to "redouble its efforts. The citizen can no longer wait." The same must be rewarded and honored all those who have made outstanding achievements in the past stage, if we do not fulfill them, we condemn the march of failure and stoppage, urging the executive institutions to «enable the professional disciplines from the joints of direct management through occupying the positions of the State It continues to be administered by proxy over the past years, relying on the principle of efficiency, integrity and balancing the components of the Iraqi people ».

In turn, the head of the Supreme Islamic Council, Hammam Hamoudi, said in his speech at the ceremony: «We are continuing in the project to support the building of a strong independent state capable of protecting its people and independence of its will, and rejects all forms of domination and external interference in its affairs», declaring «the national strategic framework of the Supreme Islamic Council, Defining it with 12 essential points: “Commitment to the directives and commandments of the supreme religious authority; Alterziat pressures and policy, and the establishment of the Supreme Council for Education to take it upon himself to this task, and focus on the development of the economy and diversifying its sources and raise the living standards of citizens, and to involve people in the economic reconstruction process. »

Hamoudi also stressed the preservation of a decent life for all Iraqis through the provision of adequate housing, rebuilding areas and neighborhoods affected by the military operations, paying particular attention to the families of martyrs, sacrificed and wounded and caring for the displaced, and called for combating violence against women, and not to exceed their rights to consume imported experiences It has proven its failure, caring for the generation of freedom and nurturing it, and providing good opportunities to highlight their creations to contribute to shaping the future of the new Iraq. And stress the importance of the role of the media and political parties away from the campaigns of moral and political overthrow ».

Hamoudi called for «full commitment to preserve the sovereignty of Iraq and reject any attempt to violate it», calling on the government to "give the issue of arming the security forces of all kinds of great importance, and to reconsider the presence of foreign forces on Iraqi territory, and determine their tasks and their number and places of presence and the period of supervision And refused to intervene in the internal affairs ».

Hamoudi called on the Minister of Health to "withdraw his resignation and build a ministry away from corruption", while expressing «regret the way the security services deal with the holders of higher degrees and calls for the investment of their energies».

For his part, the leader of the Supreme Council Jalaluddin al-Saghir, told »morning»: The anniversary of the founding of the Council comes as a reminder of the nature of the principles and sacrifices made by the Supreme Council, noting that the reminder of these great days motivated by the motivation to restore the basic files that are related to citizen service without Quotas.

Al-Saghir added that the Supreme Council takes advantage of this occasion to present its vision of what is happening inside Iraq at the level of government performance and the performance of parties and the nature of the relationship with the popular institutions in addition to the nature of the pitfalls facing Iraq, pointing out that the Council is the tent that brings together all spectrums of the Iraqi people and all components.

Al-Kinani added that the Supreme Council confronted the regime and made many sacrifices in addition to its active contribution to the political process.

For her part, the head of the Kurdistan Democratic Party bloc Fian Sabri said that the importance of this anniversary lies in the great sacrifices made by the Supreme Council, pointing out that the blood of the sons of the Council mixed with the blood of the Peshmerga in the defense of Iraq.

She explained to the «morning» that the Supreme Council and the Peshmerga Karaa regime exterminated together and in the war against ISIS gangs, so we will continue together in the battle of construction and reconstruction.

In the meantime, the head of the parliamentary bloc citizen Sana al-Moussawi, the anniversary of the founding to renew the era of the leadership of the Council to proceed on the same principles laid down and founded by the martyr Mihrab Mohammed Baqir al-Hakim.

Al-Moussawi told Al-Sabah that the Supreme Council continues to defend Iraq and demand a decent living for citizens and the implementation of the constitution, calling on the political components to cooperate in building Iraq.

Page 1 of 1
Permissions in this forum:
You cannot reply to topics in this forum
Who is online?
In total there are 167 users online :: 2 Registered, 0 Hidden and 165 Guests :: 2 Bots

RamblerNash, Sam I Am

Today at 9:56 pm by RamblerNash

Today at 9:53 pm by RamblerNash