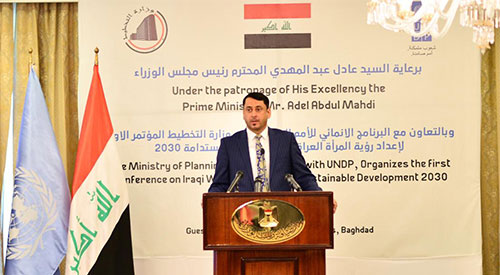 The Secretary-General of the Council of Ministers, Mr. Hamid Al-Ghazzi, opened the first conference on the preparation of the vision of Iraqi women in sustainable development 2030, which was held under the auspices of Prime Minister Adel Abdul Mahdi .

"The Agenda for Sustainable Development reflects a fundamental depth of social, economic and environmental levels for all countries of the world, which laid the foundation for the building of healthy societies free from violence, war and destruction, " he said.

The Secretary-General pointed out that "women have been a central axis in this plan, because of their active role in creating social and cultural awareness that promotes security and peace is a prerequisite for the sustainability of the development wheel." "There can be no progress without gender equality and the elimination of all forms of discrimination so that women can be leaders in the industry and build positive change in society ."

On the contribution of Iraqi women to the process of integration and construction, the Secretary-General explained that "Iraqi women played a large role and stand with men in the most difficult circumstances, especially after the invasion of the city of Mosul and the ensuing events in which women suffered most through displacement, physical violence and other methods that Adopted by terrorist organizations; where Iraqi women wrote a bright history and success stories must be referred to Lebanon .

Based on these data, it was stressed that "the vision of women and the goals that represent a starting point for achieving sustainable development is consistent with the magnitude of sacrifices and altruism that Iraqi women have made in recent years ."

Regarding the enrichment of national and international expertise and the concerted efforts of institutions, the Secretary-General stated that "To ensure that women do not lag behind development and enjoy their gains, we need to develop a participatory vision between the government and its institutions, as well as the role of international organizations, bodies, civil society organizations, local communities and other actors working from Order to advance feminist reality . "

In conclusion, the Secretary-General thanked the organizers of the Conference and the efforts of governmental institutions in this regard, in particular the United Nations efforts represented by the commitment of the United Nations Development Program, the Women Empowerment Service, the Secretariat of the 1325 Committee of the Secretariat of the Council of Ministers and all the supporting bodies representing the consultative and scientific expertise in The realization of the Sustainable Development Goals .

The conference included five themes that shed light on the situation of women in Iraq, and discussed ways of scientific and institutional efforts to achieve optimal development .

The Ministry of Planning, in cooperation with the United Nations Development Program (UNDP), organized the first conference to prepare a vision for Iraqi women in sustainable development 2030, in the presence of a number of government officials in the executive, legislative and judicial authorities, as well as representatives of local and international organizations and women specialists . 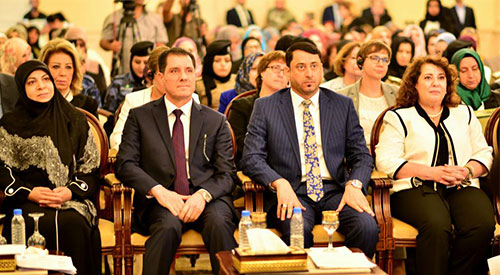 Page 1 of 1
Permissions in this forum:
You cannot reply to topics in this forum
Who is online?
In total there are 109 users online :: 3 Registered, 0 Hidden and 106 Guests :: 2 Bots