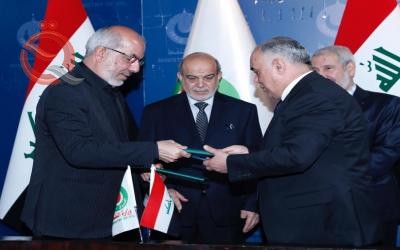 The Iraqi Ministry of Oil signed a contract with the Iraqi oil company Dhi Qar to drill 20 wells in the Nasiriyah oil field.
"The contract was signed between two companies within the oil sector to develop production in the field of Nasiriyah through drilling 20 wells that add to the production rates in the field 40 thousand barrels of crude oil In addition, the associated gas will be invested at rates of up to 20 million standard cubic feet of gas that will be used as fuel for power plants.
"This project will open the door to provide job opportunities for the Iraqi labor force in Dhi Qar province," he said.
For his part, the Director General of the Iraqi Drilling Company Bassem Mohammed Khudair said that "the contract includes the implementation of drilling 20 wells using four modern towers, and that the company will provide all the possibilities for the implementation of the contract within the prescribed period of two years, at a financial cost (128) million dollars."