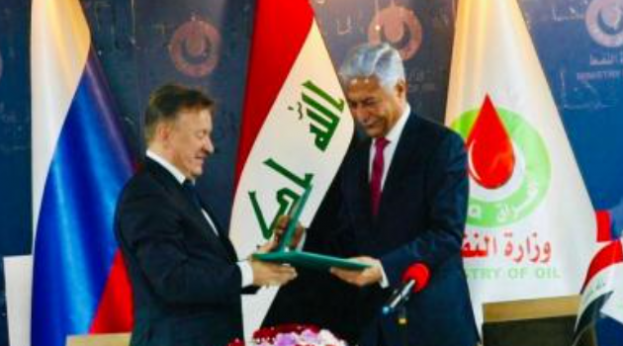 By John Lee.
Russia’s Stroytransgaz has signed a preliminary contract for the exploration, development and production of Block 17, in Anbar province.
At a signing ceremony in Wednesday, Deputy Prime Minister for Energy Affairs and Oil Minister Thamer Abbas Ghadhban said that preliminary studies and information indicate the existence of oil reserves ranging between 2 and 4 billion barrels oil equivalent of gas. The block measures 12,000 square kilometers.
The Director General of Petroleum Contracts and Licensing Department, Abdul Mahdi Al-Amidi, said that the contract commits the company to build a residential complex in Anbar province in addition to the development of infrastructure and services for the province, with an estimated value of $100 million dollars.
Stroytransgaz was sanctioned by the US Department of the Treasury’s Office of Foreign Assets Control (OFAC) in 2014 in relation to Russian activity in Ukraine.
The deal needs final approval by Iraq’s Council of Ministers.
(Sources: Iraqi Oil Ministry, OFAC)
17http://www.iraq-businessnews.com/2019/09/05/russian-firm-to-develop-exploration-block-in-anbar/

The Ministry of Oil signed on Wednesday the initials of a contract for the exploration, development and production of the exploration patch No. (17) in the province of Anbar with the company (Stroy Trans Kaz Oil).

Deputy Prime Minister for Energy Affairs and Oil Minister Thamer Abbas Ghadhban said that the exploration area (17) of promising sites where preliminary studies and information indicate the existence of oil reserves ranging between (2-4) billion barrels of oil equivalent gas (60-70)% from him .
Ghadhban stressed the importance of this project in promoting oil and gas activity in this province, which contributes to enhance the economic and developmental reality and provide job opportunities, as well as support the local private sector through secondary contracts.
Director General of Petroleum Contracts and Licensing Department Abdul-Mahdi Al-Ameedi said that the Ministry of Oil signed today the initials contract for exploration, development and production of the exploration area (17) with the company (Stroy Trans Kaz Oil), pointing out that the ministry sent the contract to the Ministerial Council of Energy and then to the Council of Ministers for approval In order to proceed with the final signing of the contract to commence the exploration, development and production of the exploratory patch.
Al-Amidi added that the contract commits the executing company to build a residential complex in Anbar province in addition to the development of infrastructure and services for the province with an estimated value of (100) million dollars, in addition to the allocation of one million dollars from the date of activating the contract after the approval of the Council of Ministers and until a commercial announcement of discovery to finance the development of infrastructure.
The Director General explained that amendments have been made to the contracts of the fourth licensing rounds and to include them in this contract. (35%) of the sale value of part or all of the contractor's share of the contractor, in addition to canceling the contractor's office outside Iraq.
The representative of the Russian company Stroy Trans Kaz Oil stressed his company's keenness to strengthen and increase the volume of cooperation with the oil sector in Iraq, and that this contract contributes to achieve this goal, and that his company will work to develop this exploration area and to achieve the common goals of both sides.
For his part, spokesman for the ministry Asim Jihad said that this contract with the Russian company is (service contract) includes exploration, development and production operations and an area of ​​(12000) km 2.
Jihad added that this contract had already been signed in 2003 between the oil exploration company and the Russian company "Stroy Trans Kazawil" in the form of a production contract contract was not ratified at the time, has changed the wording of the contract to a service contract similar to the contracts of the fourth round after Several rounds of negotiations between the ministry and the company, Jihad continued that the duration of the contract (34) years, including (9) years for the exploration phase and (25) years for the development and production stages and in the case of reducing the exploration period is added to the years of development and production.