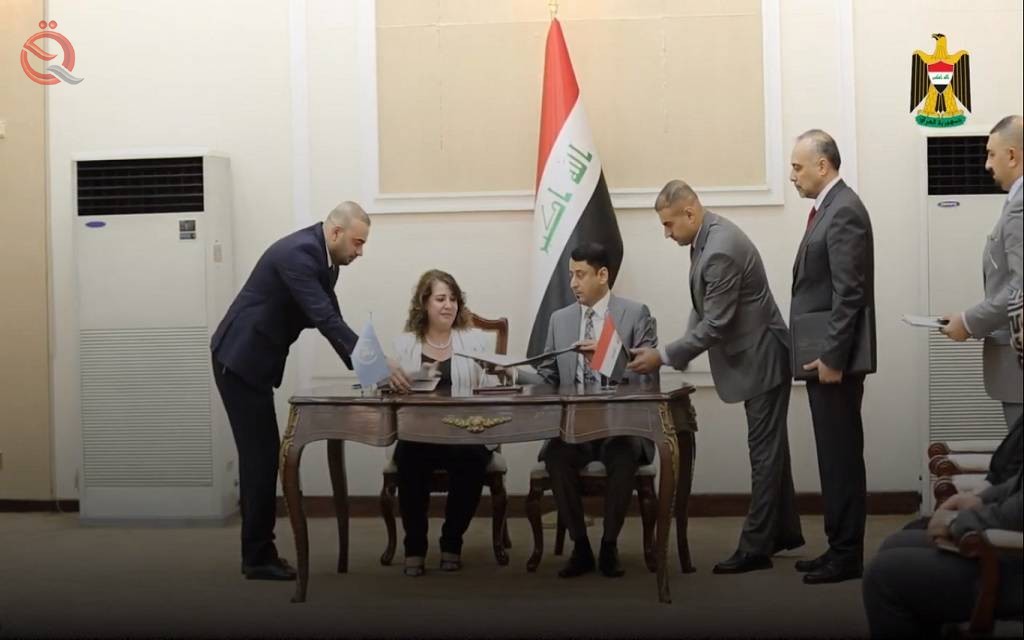 Iraq has signed an agreement with the United Nations Development Program through the government's contribution of $ 33 million to support the activities of the projects of stabilization and reconstruction in it.
The Iraqi government said in a statement that it "this financial contribution becomes one of the top 10 donors to the United Nations Development Program in the area of ​​stabilization in Iraq."
The government added that "these projects include the rehabilitation of infrastructure and the provision of basic services such as water, electricity, health care, housing and education, in the liberated and affected areas, especially in the provinces of Nineveh, Anbar, Salah al-Din, Diyala, Kirkuk and Basra."
According to the statement, "This agreement reflects Iraq's commitment to the strategic partnership with the United Nations; aimed at restoring stability in the liberated areas and the return of displaced people, and the construction and rehabilitation of infrastructure in the provinces that have suffered and damaged by the circumstances that have gone through the country."
The UNDP stabilization project in Iraq, which has completed more than 2,000 stabilization projects so far, benefits more than 8 million Iraqis.
The project was launched in June 2015 at the request of the Iraqi government and with the support of the international coalition against ISIS, to support Iraq's efforts to quickly restore stability to the liberated areas, and to assist IDPs to return to their areas.

Baghdad, 28 August 2019 – The Government of Iraq has today signed an historicagreement with the United Nations Development Program (UNDP), committing USD 33 million for stabilization activities across the country.

Administered through UNDP’s Funding Facility for Stabilization (FFS), the contribution will be used to rehabilitate essential infrastructure and services like water, electricity, healthcare, housing and education in key areas of Ninewa, Anbar, Salah Al-Din, Diyala, and Kirkuk.

It places the Government of Iraq as one of UNDP’s top 10 donors across its stabilization portfolio, and signifies the government’s trust and confidence in its partnership with UNDP.

“We’re extremely grateful for this contribution, which represents the Government of Iraq’s unwavering commitment to stabilizing Iraq and encouraging the safe and dignified return of communities who fled the atrocities of ISIL,” says UNDP’s Resident Representative in Iraq, Ms. Zena Ali Ahmad.

“The Government of Iraq has been a strong partner and leader within UNDP’s stabilization efforts. Without their support, we wouldn’t have been able to complete more than 2,000 stabilization projects benefitting more than 8 million Iraqis. We look forward to bolstering our partnership with this new agreement,” adds Ms. Ali Ahmad.

The Secretary General of the Council of Ministers, His Excellency Mr. Hamid Al-Ghizi said: “Through this agreement, the Iraqi government seeks to implement projects in various affected geographic areas, while focusing on those areas that have experienced the most damage.

“The agreement will mostly focus on infrastructure and water, electricity, health and other projects, as our  provinces still need more infrastructure and support for basic services. The agreement also reaffirms Iraq's commitment to the strategic partnership with the United Nations Development Programme to restoring stability in the liberated areas, enabling displaced communities to return, and building and rehabilitating the infrastructure in the provinces that have been affected by the tragic circumstances that have passed through the country,” added His Excellency Mr. Al-Ghizi.