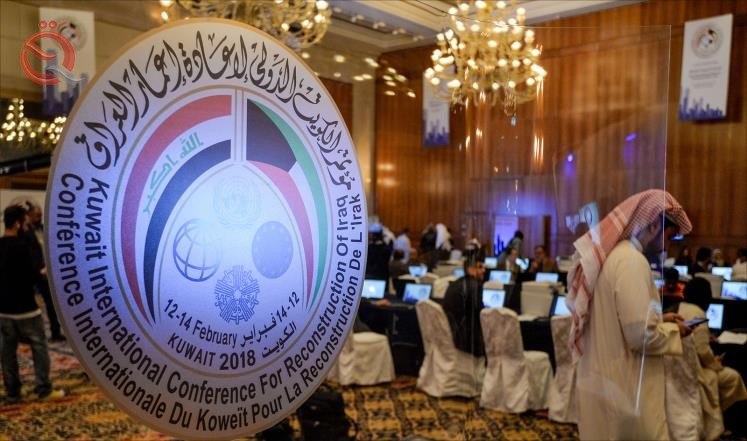 Kuwait, which participated in the Conference on the Reconstruction of Iraq, which hosted Kuwait in February last year, to fulfill its obligations.

Kuwait's Permanent Representative to the United Nations, Ambassador Mansour Al-Otaibi, said during the session of the Security Council on Iraq, according to the official Kuwait News Agency (KUNA), that he "encouraged all countries that participated in the conference to fulfill its commitments," expressing hope for "cooperation and coordination With the Iraqi government to establish a mechanism to follow up on the implementation of those commitments to contribute to achieving the aspirations of Iraqis. "
Al-Otaibi added that "our bilateral relationship with the Republic of Iraq is witnessing continuous and positive developments, turning the page of that painful past, opening a new page of fruitful cooperation and translating this approach by solving the remaining outstanding issues."
He continued, "Bilateral visits are at the highest level, most notably the visit of the Amir Sheikh Sabah Al-Ahmad Al-Jaber Al-Sabah last June and the joint bilateral committees are an important indicator to strengthen that cooperation."
"Since the demise of Saddam Hussein's regime, Kuwait has provided all kinds of support and assistance to the Iraqi people," he said.
He continued: "We look forward to strengthening support by investing promising opportunities in the so-called relations and raise them to the level of ambition and achieve the two countries and their peoples progress and prosperity," praising the "commitment and commitment shown by Iraq in fulfilling all remaining international obligations stipulated in the relevant Security Council resolutions towards State of Kuwait as required. "

Security Council: Iraq describes as a country with enormous challenges where root causes of Daesh persist

[size=36]Security Council: Iraq describes as a country with enormous challenges where root causes of Daesh persist[/size]

Mr. MANSOUR AYYAD SH. A. ALOTAIBI ( Kuwait) commended UNAMI for its work and progress, including developments in the situation of missing Kuwaiti nationals.


Noting that bilateral relations have evolved positively in recent years, he said that it is in the direction of cooperation while Kuwait intends to "turn the page of a painful history." Kuwait supports the Iraqi people because it has common interests with this neighboring country that it wishes to promote, the representative said.


He also commended Iraq's commitment to honor all international agreements and to implement Security Council resolutions. Kuwait, said the delegate, is ready to help implement these commitments, including those taken on humanitarian grounds and related to missing Kuwaitis in Iraq. In that regard, he welcomed the efforts made to identify the fate of 236 missing Kuwaiti nationals out of a total of 605.


We hope that the fate of more missing persons can be clarified and that more burial sites will be unearthed, "he said. On the other hand, he pointed out that, with regard to missing property and archives, "progress is meager". In fact, he said, only 32 of the 120,000 documents that belonged to the University and the National Library of Kuwait were found.


The representative also felt that progress could be made at all levels in Iraq if the country implemented the necessary reform programs. In terms of security and economic recovery, he said he noted positive progress during the Security Council's visit last June. Finally, he encouraged UNAMI to continue its mandate to contribute to the stabilization of Iraq, also calling on the participants in the Conference on the Reconstruction of Iraq to honor their commitments.

Baghdad, 29 August 2019 - The United Nations Assistance Mission for Iraq warmly welcomed the return by the Government of Iraq today of a large consignment of Kuwaiti property, removed from Kuwait during the conflict of 1990-91. The repatriation of the property marks another important step towards the full normalisation of relations between the two countries.


In a ceremony at the Diplomatic Institute in Kuwait City, a total of 42,000 books and materials belonging to the Kuwaiti Central Library and Kuwait University were handed back to the Kuwaiti Government. The handover was attended on behalf of the United Nations by Ms Hideko Hadzialic, United Nations Resident Coordinator a.i. in Kuwait.

UN Deputy Special Representative for Iraq Alice Walpole applauded the efforts of the governments of Iraq and Kuwait to resolve outstanding bilateral issues and called for continued constructive engagement to enable closure of the file on missing Kuwaiti property, including the National Archives, in line with United Nations Security Council resolution 2107 (2013).