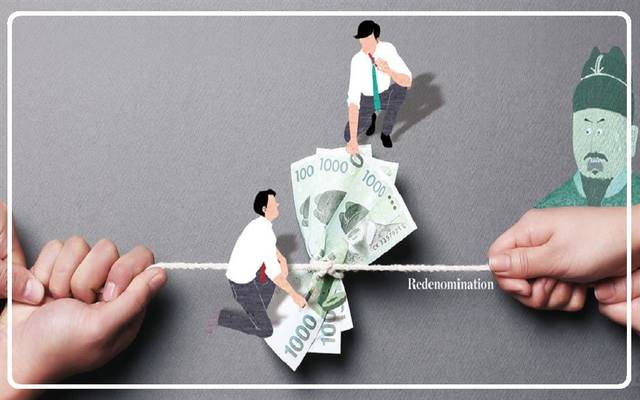 
Direct: You have an economic problem? Does your country’s currency suffer a sharp decline? The solution is simple: “The central bank can cancel zeroes from the currency”, but is it really that simple?

Countries usually resort to a policy of “zeroing out zeros” to break a deadlock. Iran was the latest example of such a move, joining others such as Venezuela, Turkey, Argentina, Brazil and others.

And redenomination is a process meant to replace the old currency with new ones worth less than the previous amount of discount zeros, for example , when you cancel six zeros from the currency, each million of the old currency will turn into only one category of the new currency , according to the amendment.

What is the goal of governments to delete zeros?

There are various reasons why governments may decide to remove zeros from the currency, but there are five main motives , according to an Iranian study.

This move may only work with macroeconomic stability and a downward trend in inflation as well as a stable exchange rate as the government stops excessive spending and strong confidence in governmentpolicies.

But if the government is satisfied with this step without being accompanied by comprehensive economic reforms, the policy of removing the zeros will not only be ineffective, but it will be a failure soon.

There are famous cases in history that reveal the governments of some countries to remove a number of zeros from their local currency.

According to a US study by the University of North Carolina, there have been 70 cases of zero zeros since 1960.

Nineteen countries have eliminated zeros in their domestic currencies once, while 10 have resorted to such a move twice.

Argentina has seen the elimination of zeros four times, while the former Yugoslavia (Serbia) to the deletion of five times, and Brazil also got rid of zeroes six times.

Bolivia has decided to get rid of the zeros twice, while Ukraine, Russia and Poland have accepted the measure three times, while Turkey, Korea and Ghana carried out the move only once.


The most prominent of these cases was Brazil, which suffered an acceleration of inflation to the level of 2000 percent in 1993 and although all attempts to intervene government by removing zeros or changing the name of the currency failed, but that year succeeded in curbing the sharp increase in the CPI by eliminating 3 zeros. Of currency.

From 1930 to the beginning of the century, Brazil saw the elimination of 18 zeroes in 6 times and the currency was renamed 8 times.

Before the abolition of the local currency and the shift to the euro, Germany was the first to remove zeros from its national currency in the wake of World War I against the backdrop of economic pressure on the country and pushed inflation to high levels.

Given the Netherlands experience , it may be a positive example of the success of the zero-zero policy when it is accompanied by other policies that control liquidity.

The Netherlands suffered unexpected inflation in 1960, prompting the government to issue large-scale banknotes in an effort to meet the daily needs of individuals.


The Dutch government then began tough policies and cut four zeros of paper money in the country, enabling the government to control the amount of money.

Turkey was not an anomaly in this one-off situation, but it was an effective and relatively successful policy testimony by the IMF because of its ability to fight inflation.

After the dollar amounted to 1422 pounds in 1988 and reached more than 5.1 million pounds in 2003, to turn the largest banknotes of currency from the category of 5,000 pounds to one million pounds.


In January 2004, the decision to remove six zeros from the old Turkish lira was passed, with the implementation step postponed until early 2005. New paper and coins called “New Lira” were introduced into the market, with the old one million lira being equal to one new lira .

On January 1, 2009, the word “neo” was removed from the official name of the local currency of Turkey to revert to its former name Turkish Lira.

Zimbabwe was plagued by a runaway inflation crisis that also forced it to remove three zeros from currency in 2003, but the measure, which lasted for a short while, apparently failed as the governmenttook no further steps in controlling inflation.
Nearly six years later, the Zimbabwean government decided to devalue the currency at zero immediately, meaning that 1 trillion Zimbabwean dollars would be equivalent to one Zimbabwean dollar.

As inflation in Zimbabwe worsened in 2008, the government was forced to cancel its currency the following year in exchange for using other foreign currencies, before returning in 2019 to its native currency (Zimbabwe dollar) again.
In an effort to curb hyperinflation, Venezuela occasionally cuts the zenith of its Bolivar currency, and despite signs of slight improvement, the picture remains bleak .

In mid-2019, Caracas announced that it was issuing three new denominations of its local currency, 10,000, 20,000 and 50,000 bolivars, following steps to remove the zeros implemented last year.

In August 2018, Venezuela announced the issuance of a new currency canceling five zeros of the value of its currency in the face of a severe economic crisis, the fifth step of its kind .

Under strong pressure on the oil-rich country from US sanctions, Iran has announced its intention to remove four zeros from the value of its domestic currency “rial” this year, to be the last country to resort to such a move.

The move, approved by the Iranian government on July 31, comes in an effort to tackle the problem of accelerated inflation against the backdrop of a sharp devaluation of the currency as a result of economic sanctions imposed by Washington following the withdrawal of President Donald Trump from the Iranian nuclear agreement in mid-2018.

While according to official figures published on the website of the Central Bank of Iran, the dollar was equivalent to 42 thousand riyals at the time of the decision to cancel the zeros.

The Iranian government also approved the renaming of its currency to “Altoman,” the former unit that was in circulation until 1925.

The Iranian people have been using the toman for decades, with a unit of 10 riyals, in a bid to simplify transactions.
According to the International Monetary Fund, Iran’s economy could contract by 6 percent this year due to sanctions and growing instability in the Middle East.

This is not the first time that Iran has accepted this step, as it has seen the removal of three and four zeros back to 2007.


What about the advantages and disadvantages of removing zeros?

The issue of removing zeros from the value of the currency has many advantages, including the reduction in the size of banknotes and reduce the costs of issuing and depreciation of those paper money.

The simplification of transactions and the elimination of long queues in banks is one of the most important advantages of this process in addition to strengthening the value of the local currency compared to other currencies.

As for the defects and problems , are the costs of re-issuing banknotes and minting new coins in addition to the risk of capital flight abroad as investors await the results of this step.

Confusion among individuals in the short period of time following this step is an important problem as well as the psychological impact of the sharp decline in the value of salary in addition to the risk of exports decline due to the appreciation of the local currency.
*****************
Tweet