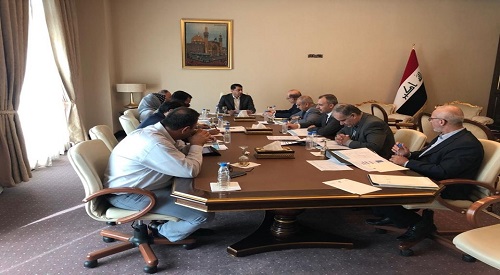 The Management and Coordination Committee for the establishment of the e-government project approved the plan and the projects that will be implemented by the committee in the ministries and governorates in coordination with all government agencies.
The Chairman of the Committee directed the Secretary General of the Council of Ministers, Mr. Hamid Al-Ghazzi, during his presidency of the Committee's Secretariat to form a technical team headed by Dr. Amir Al-Bayati, Undersecretary of the Ministry of Communications to conduct the survey and prepare specifications related to the assessment and identification of the needs of ministries, governorates and all government agencies, to complete the networking of them and in cooperation with the Secretariat He stressed the priorities of the committee's work in addressing the problems and obstacles facing the implementation of the e-government project, and the seriousness in developing the appropriate plans that allow the program to succeed and appear at the required level.
The Committee agreed that the General Secretariat of the Council of Ministers shall assume the task of administering the National Data Center on a temporary basis until the completion of the building dedicated to the Center.
It also discussed a number of topics, most notably (electronic collection and the settlement of salaries of employees).

Page 1 of 1
Permissions in this forum:
You cannot reply to topics in this forum
Who is online?
In total there are 100 users online :: 1 Registered, 0 Hidden and 99 Guests :: 2 Bots