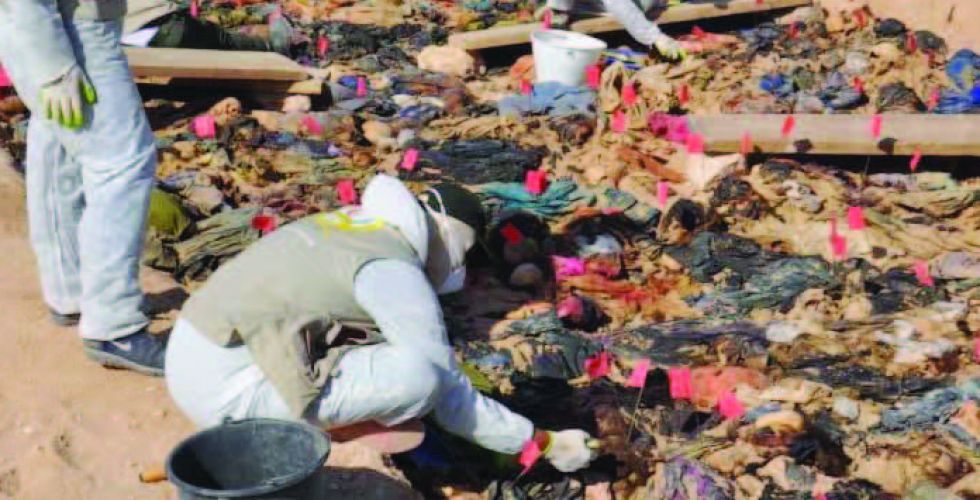 The Martyrs Foundation is coordinating with the United Nations to conclude a memorandum of understanding including international assistance in the file of mass graves, indicating that it also agreed with the Department of Forensic Medicine to establish an integrated database of unidentified victims of the grave regime.

An official source in the Foundation said in a special statement to "morning": The Martyrs Foundation is working hard by devoting its efforts with the international community to support the files of victims, especially with regard to the martyrs of mass graves since the enforced disappearance, is a crime criminalized by society
International.

Based on the above, the foundation coordinated with the UN investigation team on the issues of enforced disappearance and the proliferation of mass graves, whether by the victims of the former regime or the victims of terrorism after 2003, in addition to the graves left by the terrorist gangs "Daesh" in the areas under Its power.

The source disclosed that his institution agreed with the UN team to form a committee, which will be responsible for establishing the necessary bases and procedures for the conclusion of a memorandum of understanding in order to obtain international support for the subject of mass graves, in addition to mechanisms to criminalize the perpetrators and those involved in accordance with the laws in force and the file of national reconciliation.

The memorandum also includes facilitating mechanisms for recognizing victims' entitlements by facilitating the submission of identity papers for victims, either after or before 2003, to the international courts specialized in human rights cases to internationalize the case and obtain international support to grant them their rights.
On the other hand, the source said that the foundation started an advanced stage of cooperation with the relevant authorities in the field of exchanging statistics and information necessary for the victims.

The two sides agreed on continuous joint cooperation by providing the National Center with a complete database of the unaccounted for whose remains were found after 2003, and their fate has not been determined, or their relatives to be documented in the center's database and trying to determine their fate in the next stage to grant rights to their relatives. .

Similar topics
» Under the direct sponsorship of Al-Kaabi ... the signing of a protocol of cooperation between the International Committee for Missing Persons and the forensic departments of the Ministry of Health and the mass graves of the Martyrs Foundation
» The Human Rights Department organizes a consultative meeting for representatives of the ministries and judicial bodies of missing persons and forcibly disappeared persons
» Minister of Planning discusses with the United Nations and the European Union increased support for the services file
» The Minister of Planning announces the launch of the National Youth Employment Project
» The House of Representatives begins the new legislative session next Saturday