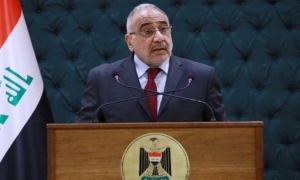 BAGHDAD - Iraqi Prime Minister Adel Abdul Mahdi has failed to win over the Alliance for Reform and Reconstruction, backed by Sadr's leader Muqtada al-Sadr, and all the political forces involved in it, and convinced them that he could continue to lead the government, due to a combination of Files that he was unable to resolve within the time limits specified in his government program.

The political blocs in the «Reform and Reconstruction», headed by the Alliance «Siron», as well as the current «National Wisdom» led by Ammar al-Hakim, to monitor government performance and questioning ministers and prime minister, during the next legislative term (early September) To dismiss the prime minister and his cabinet.

He accused the Alliance «Siron» Abdul Mahdi «failure», while threatening to take a firm stand.

In a statement, the deputy for «Sireon» Rami al-Skini, the readiness of his coalition to «work to withdraw confidence from Abdul-Mahdi if it continues on the same performance in the management of the state» ».

He pointed out that «the political blocs and the House of Representatives will take another position against the prime minister if he continues in the same approach in the management of the state».

Also, a member of the committee to follow up the implementation of the parliamentary government program Hazem al-Khalidi, on Friday, that the next legislative chapter will focus on the government evaluation from the ministers to the Prime Minister.

Khalidi, a deputy from the «National Approach» parliamentary bloc of the «virtue», that «most of the paragraphs that have been applied and given priority in the program of the prime minister is not important and the citizen did not touch anything clear of them», noting that «the government's actions so far "Unemployment, the housing crisis, the protection of the domestic product and the agricultural side were not addressed."

He added that «the Prime Minister and a year after the life of his government, demands to reconsider the priorities of work in the government program, especially that through the review of the procedures followed we found a big difference between the government program and the ministerial curriculum and when we make an assessment of everything that exists in the program, we find that it is no more than ink On paper ».

He pointed out that «among the observations we have, there is a paragraph of the government assessment on the achievement of traffic congestion and congestion by 100% and do not know where this percentage came and what measures the government team to end the congestion, which is still ongoing did not find the construction of tunnels or bridges or procedures "On the ground as a metro or other building supports this assessment and we did not find a country in the world to import cars as we found in Iraq."

He stressed that we «agreed with the Presidency of the Council to allocate a large part of the next legislative chapter for the purpose of government evaluation specifically from the ministers to the Prime Minister».

Meanwhile, the head of the National Wisdom Movement, Ammar al-Hakim, considered that the services challenge facing the government should be a top priority, calling for adopting political solutions and dialogue in addressing the existing problems.

He said in a statement, while receiving the US ambassador in Baghdad, Matthew Toller, that he showed the latter «nature of the opposition pursued by the wisdom as a political, constitutional and legal, and stressed that it is an opposition seeking to correct the path and contribute to the stabilization of the political system and its democratic wings, and we pointed out that the challenge of services facing The government should be a top priority and the need to focus the government effort on the advancement of service in the country ».

In addition to the service file, Abdul-Mahdi and his cabin face the responsibility of fighting corruption, which has contributed to the loss of billions of dollars over the past years, and despite the Prime Minister's pledge to eliminate the "corrupt" several times, but anti-corruption measures are still slow to link most of the "corrupt" with blocks and leaders Prominent political. According to observers.

A member of the Committee for Monitoring the Implementation of the Government Program and Strategic Planning, Anaam Al-Khuzaie, called on Abdul-Mahdi to restructure the Investment Authority and inject economic efficiencies in it, provided that they are outside the scope of party quotas.

Al-Khuzai said in a statement: «It is no secret to those with economic and financial specialization that Iraq has lost during the past years billions of dollars due to the decline in the rate of foreign investment in all sectors», noting that «the report of the United Nations Development Organization of the United Nations, issued recently, revealed the loss of Iraq "$ 36 billion in just six years."

She pointed out that «those rates reflect the weakness of the government in securing a suitable investment climate to attract investments to the country», pointing to «the failure of the Independent Investment Authority to raise rates of foreign investment in the country as claimed and stated in all occasions and economic events».


According to Khuzaie, «the report and alarming ratios contained weak economic prospects for Iraq», calling «Prime Minister to restructure the Investment Authority and the inclusion of economic competencies provided that the body outside the scope of partisan quotas».