The leader of the Sadrist movement, Shiite cleric Moqtada al-Sadr, on Friday evening, a series of "advice" to Iraqi Prime Minister Adel Abdul-Mahdi, said it «popular demands called for reference», warning that the continuation of the current situation «is not acceptable legitimately and rationally, It is also unacceptably popular. ”

In a Twitter tweet, Sadr called on Mehdi to "fully commit (to independence) and not to be inclined to one party or another, otherwise the deviation from independence would be a new (deep state) construction."

He added that «the services file is still lagging and almost non-existent, we hope the Prime Minister to strive diligently and tangible to activate the services have been hurt the people a lot and patience is no longer easy».

Also, Sadr said: «We did not see any progress in the file of anti-corruption at all, but the blame, and this silence is almost a authorization of corruption, if true, we will be afflicted by affliction, and not inevitable».

Al-Sadr concluded his advice by saying: «Maintain the prestige of the state, its security institutions, and the independence of the Iraqi decision, and do not hesitate to punish those who weaken the security services, and punish those with foreign affiliations to be a full sovereign Iraq». 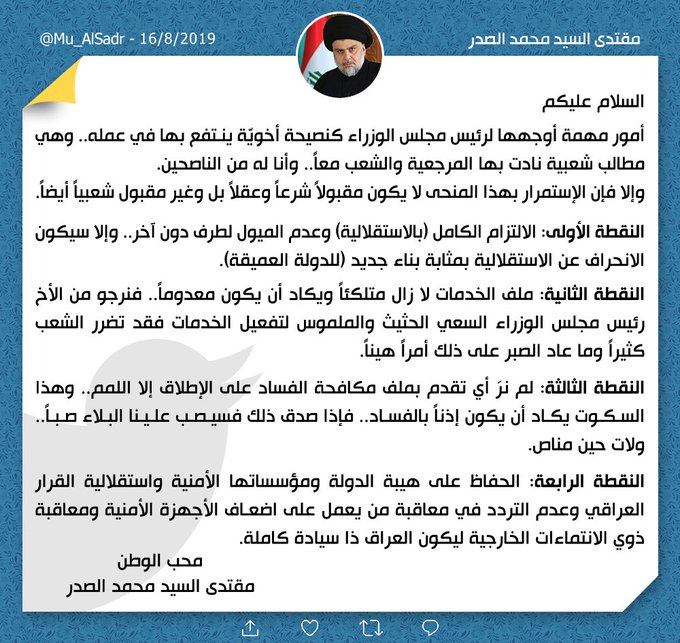 Page 1 of 1
Permissions in this forum:
You cannot reply to topics in this forum
Who is online?
In total there are 97 users online :: 3 Registered, 0 Hidden and 94 Guests :: 2 Bots