The Committee for Monitoring the Implementation of the Government Program and Strategic Planning held a press conference on Thursday 8/8/2019 under the chairmanship of MP Mohamed Shiaa Al-Sudani and the presence of its members to officially announce the completion of the Committee's report on the evaluation of the first semi-annual government report on the follow-up of the implementation of the government program until April 2019
.
Conference held in the Council building, the Sudanese MP pointed out that the committee exercised its constitutional functions in monitoring after the adoption of the ministerial curriculum by the House of Representatives during the formation of the current government in the tenth month of 2018 in a transparent and professional and in the interest of the people, indicating that the committee discussed The government report on the completion rates after receiving it in detail and during several sessions to compare the commitments made by the government in its ministerial program and what the government presented in the report, taking into account the committee's visits and hosting of ministers and concerned parties.

The Committee to monitor the implementation of the government program on its keenness to give sufficient time to evaluate and review the government report in a professional and transparent, noting that the commitment of the House of Representatives to monitor the government's commitment to its commitments and program in accordance with legal frameworks is a positive sign to find out the reality and disclose with the people, pointing out that it will send the report to the presidency The House of Representatives for review before publishing the public opinion in full.

The committee stated in its report that the government's opinion on the percentage of ministries and entities that are not associated with a ministry to the government program during the first half of 2019 amounted to 79.2%, with a rate of 20.7% diffraction, while the Committee considered that the real rate of achievement is 36.5% and the rate of diffraction 63.5% For reasons due to the different vision of the Committee from the vision of the government, blaming the executive authority in the stalled completion of important and large projects, including the improvement of services and the electricity system, despite the existence of financial allocations with the launch of the financial budget last February.

The parliamentary committee diagnosed that the government program was not in line with the government curriculum within the general budget and with the development and strategic plans of the country and promised it one of the main reasons for the diffraction not to reflect the achievements of the program according to the proportions that the government claims to accomplish on the reality of citizens' lives with the continuing crisis of unemployment, poverty, corruption and lack of sovereignty. State authority, law enforcement and lack of administrative reform in ministries and institutions.

The committee recommended in its report to reconsider the government program and set priorities in the interest of the citizen and the recommendation of the government to use criteria to measure practical and smart indicators and the need to support coordination between the committee and all ministries and state institutions and achieve hosting to see their plans and projects for the government program, and re-evaluation of ministries in practice by parliamentary committees In light of what has been achieved in the first chapter and the volume of work in the second chapter, sending the important priority legislation to the citizen, whether dealt with by the government program or omitted, and obliging ministries and governorates to cooperate and coordinate with the Ministry of Skip To be all the plans and projects belonging to the state code and included in the Ministry of Planning and specific priorities and data to facilitate the program include them in the government and the preparation of the budget is consistent with its funds specific development and adoption of an economic policy that reduces unemployment plans.

In its recommendations, the committee stressed the importance of government resistance to corruption, creating a stage of governance, integration and balance of the economy, reviewing some legislations initiated in previous sessions such as real estate ownership law and the need to separate investment and operational budget, reforming the financial sector and diversifying the economy through the development of agriculture, industry, tourism, trade and communications and increasing the tax base.
Protecting the national product, encouraging exports, achieving food self-sufficiency, caring for livestock, not relying on oil only, and preparing comprehensive development plans for long, medium and short-term reform. Strategic projects within specific time periods are of great importance in achieving social and economic development and attention by the media and the press and control websites and consolidate the concepts of citizenship and moral values ​​and take advantage of the means of rapid development and communication to eliminate terrorism and activate the role of the Department of Environment and the Department of Science and Technology
The most important observations:

1 - the lack of numerical weights for each paragraph of the government program to calculate the percentage of completion of projects where the report gave one value regardless of the size of the project where the project of electronic archiving in the Ministry of Commerce equal to the project of establishing Karbala refinery.


2- The apparent weakness in coordination between the ministries that made the plans and the Ministry of Planning responsible for approving the plans.


3 - The existence of many projects within the report did not achieve any achievement because of the lack of financial allocations to him, and this is a clear indicator of the delay in the process of distribution of resources provided for in the budget approved by the Iraqi parliament.

4 - The report lacked reference to important issues that were among the priorities of the new government, which the citizen anxiously awaits, such as:

- The ration card
- Outputs of anti-corruption issues
- The lack of addressing the outstanding issues between the Center and the region
- Inventory arms by the state.
. 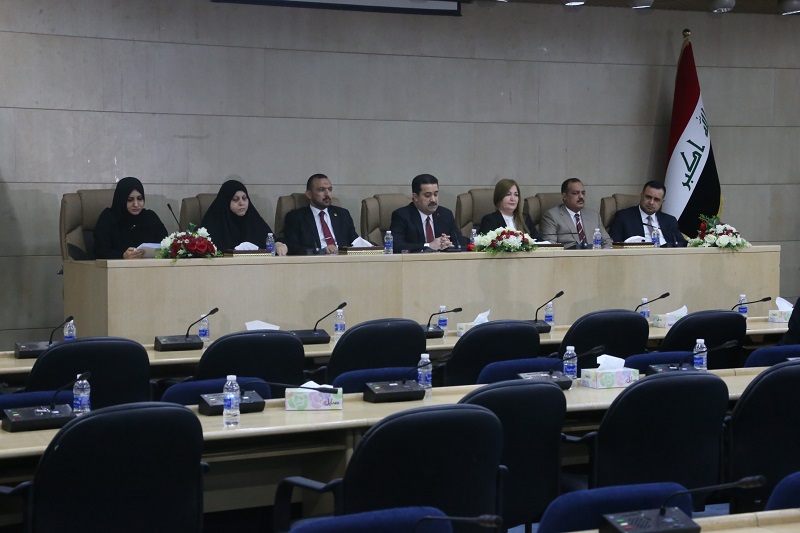