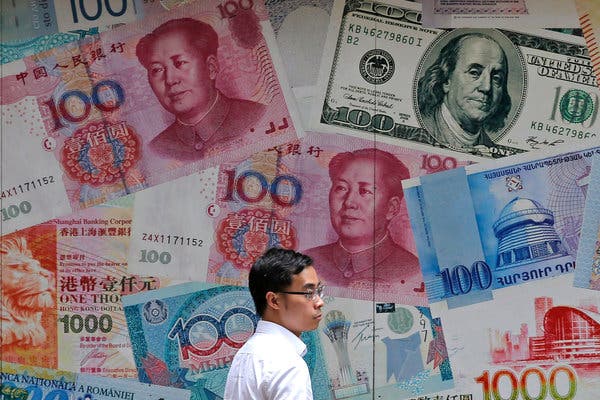 BEIJING — China’s currency weakened past the psychologically important point of 7 to the American dollar for the first time in more than a decade, a move that reflects the growing severity of the trade war with the United States and that could indicate Beijing’s growing desire to find ways to retaliate against President Trump.


The renminbi traded in mainland China on Monday morning at roughly 7.02 to the dollar, compared with about 6.88 late on Friday. A higher number represents a weaker currency. The last time China’s currency was weaker than 7 to the dollar was in 2008, as the financial crisis mounted.


Monday’s move by itself will not change China’s trade relations with the United States. But the shift past 7 renminbi to the dollar could represent a new stage in the economic conflict between the two countries. American officials, including Mr. Trump, have long criticized Beijing for manipulating its currency to help its exporters. Should the currency continue to weaken, the Trump administration will most likely see that as a dramatic retaliation to the White House’s mounting tariffs.


“This can too easily be taken as a trade war devalue to take the pressure off,” said Fraser Howie, an author and former banker who writes about China’s financial system. “To that point, it is the quiet pushback from Beijing.”


The move shook investors worried that Monday’s currency move could presage a new front in the trade war. Stock markets in Tokyo and Hong Kong, a city where shares were also hit by work stoppages on Monday, tumbled more than 2 percent. Futures markets indicated Wall Street would probably open lower, too.


The People’s Bank of China, the country’s central bank, said on Monday that the renminbi’s move was in response to the “unilateralism and trade protectionism measures and the imposition of increased tariffs on China,” but emphasized that the Chinese currency remained stable.
Unlock more free articles.


“The People’s Bank of China has the experience, confidence and ability to keep the RMB exchange rate basically stable at a reasonable and balanced level,” it said in a statement.
A lot will depend on what happens next.


The Chinese government tightly controls the value of the renminbi. Its value fluctuates within a tight range anchored to a midpoint set daily by the People’s Bank of China. On Monday, the central bank set that midpoint at 6.9225 renminbi to the dollar.


Should the central bank continue to move the midpoint weaker, that would give room for the renminbi to weaken even more. While the renminbi at 7 to the dollar does not drastically alter the landscape compared with when it was at 6.9 to the dollar, the environment would change considerably if the renminbi weakened to 7.5 or 8 to the dollar.

“If the currency does stay below 7 for another day, that is a sign that Beijing has ‘weaponized’ the renminbi as a tool to improve exports during the trade war,” said Andrew Collier, managing director of Hong Kong-based Orient Capital Research.


A weaker currency in effect helps Chinese factories defray the cost of rising tariffs. Should the renminbi weaken further, the Trump administration could respond with higher tariff rates to keep pressure on Beijing to reach a trade deal.


But Beijing runs some risks if it continues to weaken the currency.


A weaker currency could prompt wealthy Chinese to shift their money out of the country, as nobody wants to hold investments in a currency that is losing value. It could dampen the spending power of Chinese consumers at a time when Beijing needs them to keep buying to bolster economic growth. It would put pressure on domestic and foreign companies in China that have debt denominated in American dollars. It would also affect Chinese companies like airlines that buy oil in dollars.