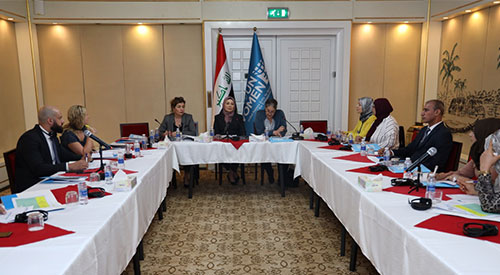 The National Steering Committee for Women approved the inclusion of 12 new civil society organizations to participate in the completion of the second phase of the UNIFEM project.

This came during a consultative meeting held in Baghdad in the presence of the Secretary of Baghdad, Mrs. Zekri Alloush, the Director General of the Department of Women's Empowerment in the General Secretariat of the Council of Ministers Ibtisam Aziz, the United Nations representative in Iraq, Ms. Martha Ruids, and civil society Dina Zorba, to develop the framework and the final form of the stage Second of the project.

In the opening session of the meeting, Aloush stressed that Iraq has set specific criteria in the selection of projects and programs for the empowerment of women, as well as the elimination of war damage caused by terrorist gangs in a number of areas of the country and increased participation of women in peacebuilding and conflict prevention. The international charters signed by it to increase the participation of women in various judicial, legislative and executive branches.

Aziz pointed to the great support provided by the Secretariat to implement the priorities of the government program on the axis of women's participation in public life through development programs and rehabilitation program explicitly and explicitly stated in addition to seeking to consolidate the foundations of peace and post-conflict, in cooperation with various national and local organizations The relevant authorities.

For her part, the United Nations representative valued Iraq's role in supporting and managing women's empowerment projects, particularly in areas affected by conflict and conflict, pointing out that the second phase will focus on supporting women in the governorates in general.

Most users ever online was 2065 on Mon Apr 09, 2012 5:34 pm
Latest topics
» Source: The IMF knows very well that the Minister of Finance has lost the confidence of the people and will not loan it again