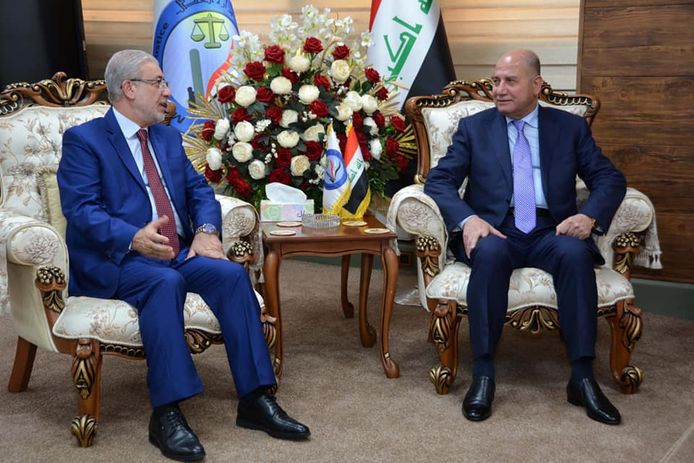 The Minister of Justice, Mr. Farouk Amin Al-Shwani, called for speeding up legislation and approving the important laws affecting the Iraqi citizen to improve their living conditions. Bashir Haddad in his office at theheadquarters of the ministry. The
two sides discussed during the meeting ways tazir cooperation and coordination between the ministry and the legislature to serve the right track of the state, to provide services to citizens and to intensify efforts to fight corruption and stabilize the society in general.
The Minister stressed that the Ministry of Justice has an integrated plan of action to improve the work of the judicial departments according to the government program and it is in direct contact with citizens in order to raise the level of institutional performance and reduce the effort and time to reach the best services, in addition to speeding up the completion of transactions citizens to simplify the procedure Thus contributing to facilitate the work of the Ministry 's departments.
For his part, the deputy speaker of the parliament praised the efforts exerted by the ministry and its follow-up to everything related to the service of citizens, stressing his continued support to work within the House of Representatives on the amendment or legislation of laws that would upgrade the work of the ministry services for the public good.

Page 1 of 1
Permissions in this forum:
You cannot reply to topics in this forum
Who is online?
In total there are 217 users online :: 2 Registered, 0 Hidden and 215 Guests :: 3 Bots