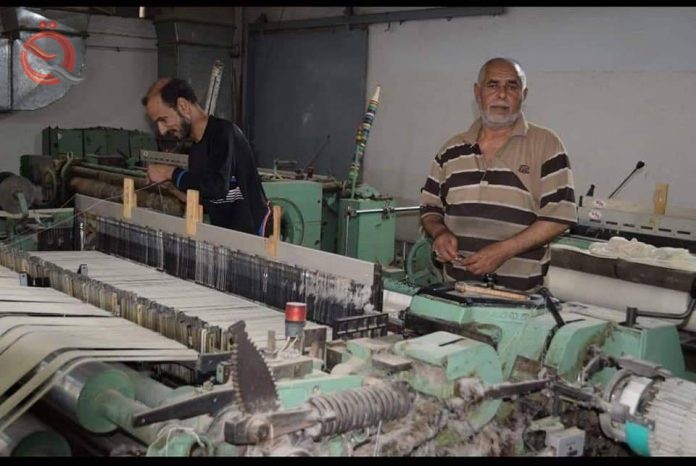 The Ministry of Industry and Minerals announced on Monday that the General Company for Textiles and Leather Industries, one of the companies of the Ministry of Industry and Minerals, could rehabilitate and operate a self-made Swiss yarn machine.
In a statement read by Al-Iktissad News, Riyad Abdul-Hussein Shaghi, general manager of the company, said that "a team from the spinning department of the textile and weaving factory in Wasit repaired and rehabilitated the Swiss spinning machine imported from the Swiss company Ritter, which was suspended due to the unavailability of the necessary spare tools To repair and restore it to work again. "
He added that "the technicians team of spinning department was able to complete the work of repair and rehabilitation of the machine and return them to work again and run experimentally, where proven efficiency and speed of production and production of mass to double production."
Shaghi pointed out that "a team from the engineering department of the textile factory and weaving Wassit distinctive and exceptional work and a record period represents the conversion of one of the old vehicles belonging to the factory possibilities and efforts to self-truck for several purposes, including the withdrawal of the tank, which was manufactured in the local markets with a capacity of (36000) Which contributed to reduce the volume of disbursements and overcome the difficulties and expenses incurred by the rental of tanker trucks.
"The receipt of the truck with the tank and the introduction of the actual work in the framework of the company's keenness to develop the reality and upgrading the production process in the factories deployed in Baghdad and the provinces."

Page 1 of 1
Permissions in this forum:
You cannot reply to topics in this forum
Who is online?
In total there are 102 users online :: 2 Registered, 0 Hidden and 100 Guests :: 2 Bots