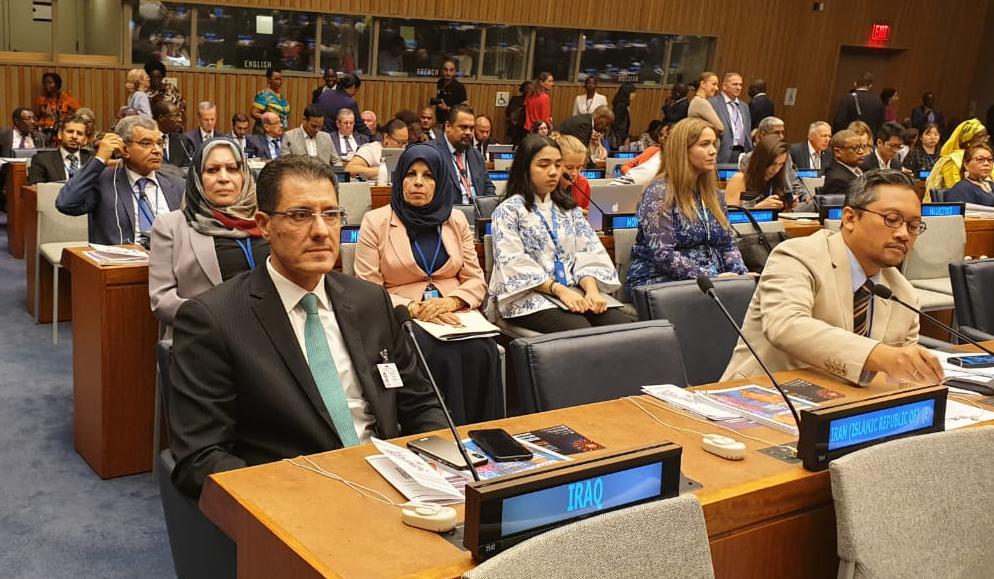 The Minister of Planning, Dr. Nouri Sabah al-Dulaimi, headed the Iraqi delegation participating in the high-level meeting of the Economic and Social Council, which started at the United Nations headquarters in New York on Tuesday.
Dr. Nuri al-Dulaimi said that Iraq will present during its participation the final report of the Arab Forum for Sustainable Development 2019, which was held in Beirut last April under the chairmanship of Iraq represented by the Minister of Planning, where Iraq will link the voice of the Arab region to the high-level political forum.
Noting that the report will be presented on Wednesday will include the progress made and steps achieved by Iraq in the framework of achieving the 17 goals of sustainable development, pointing out that the Ministry of Planning has ended from the Preparing the National Vision for Sustainable Development 2030, based on the principle of "a human being is possible in a secure and stable country".
The Secretary of Planning arrived in New York on Monday, heading a high-level delegation to participate in the work of the United Nations annual high-level political forum, which will last several days.

Minister of Planning Dr. Nouri Sabah al-Dulaimi made the first national voluntary report to Iraq on the sidelines of the high-level political forum in New York of the Economic and Social Council of the United Nations.
Dr. Nouri al-Dulaimi stressed in his speech the government's adoption of ambitious projects to improve the economic conditions and diversify the economy, including the port of Faw, which has a capacity of 99 million tons per year, pointing to Iraq's progress in long and urgent efforts to complete the adaptation of sustainable development objectives Resources for development, pointing to the need to strengthen national and local capacities aimed at improving data collection, monitoring achievements and preparing national, local and sectoral reports.
Pointing out that Iraq has taken effective steps towards integrating people with disabilities and special needs, empowering them and enhancing their participation in society. He stressed the importance of providing comprehensive and comprehensive health care for all members of the community, pointing out that 63% of the population has access to primary health care.
Explaining the work of the Iraqi government as part of global partnerships to promote international efforts to achieve and promote development, and actively participate in negotiations in various international forums on the issues of development, environment and climate change.
The Minister of Planning, when asked about the objectives that affect the course of sustainable development in Iraq, stressed that the objectives are goal 16 (peace, justice and strong institutions) because it is linked to the cause of good governance, combating corruption in the country, building values ​​of justice, peace and good citizenship, And infrastructure) because it is linked to Iraq's ability to diversify its economy, develop infrastructure and eliminate excessive reliance on oil exports.

To / media
Greetings  ,
Mr. Minister of Planning Dr. Nuri Sabah al - Dulaimi , will hold a press conference, at the eleventh hour on Monday 22/7/2019 morning, at the Ministry of Planning building ..
which speaks about the voluntary report on Sustainable Development submitted by Iraq New York two days ago, and achieved positive results in the framework of achieving the goals of sustainable development ..
The Minister will also talk about the position of the provincial plans for
2019 .. And other important issues ..
Hope your presence to cover the press conference
Subject: Press Conference of the Minister of Planning
Time: Monday, 22-7-2019
Place: Ministry of Planning Building
With appreciation of
Abdul Zahra al-Hindawi,
spokesman of the Ministry of Planning

Re: Iraq participates in the United Nations High-Level Ministerial Meeting in New York

they refined the art of kicking the can down the road with out making dents in the can so it does not have to be replaced. this was there big announcement at the last minute

Minister of Planning, Dr. Nuri Sabah Al-Dulaimi, received at the ministry's office, on Thursday, Foreign Minister, Dr. Mohammed Ali Al-Hakim and his accompanying delegation. They discussed means of enhancing regional and international relations to achieve more sustainable development goals.
Dr. Nouri Al-Dulaimi explained the efforts made by the Ministry of Planning recently during the presidency of Iraq represented by the Minister of Planning for the Conference on Sustainable Development in Beirut, and the presentation of the first voluntary report for Iraq at the high-level political forum in New York to the Economic and Social Council of the United Nations, praising the efforts of the Permanent Representative of the Republic of Iraq to United Nations that provided the necessary support.
For his part, the Foreign Minister expressed his appreciation for the efforts of the Ministry of Planning in the relevant fields of work, and the procedures directed by the Minister of Planning during the meeting to provide possible means of support to the Ministry of Foreign Affairs, especially with regard to the rehabilitation of the Ministry's buildings inside and outside Iraq and provide the best services to citizens, stressing the provision of conditions Possible support for the Ministry of Planning in implementing its vision for Iraq 2030.

Similar topics
»  Ministerial level meeting under Egyptian-Iraqi High-level Committee in Baghdad
» The Ambassador of the Republic of Iraq in Cairo participates in the meeting of the 106th session of the Economic and Social Council of the League of Arab States at the ministerial level
» THE ARAB MONETARY FUND (AMF) PARTICIPATES IN THE FOURTH HIGH-LEVEL MEETING OF REGIONAL FINANCE ARRANGEMENTS WASHINGTON, 16 OCTOBER 2019
» Iraq participates in the opening session of the {68} of the General Assembly of the United Nations
» United Nations: The budget deficit in Iraq will reach an unprecedented level