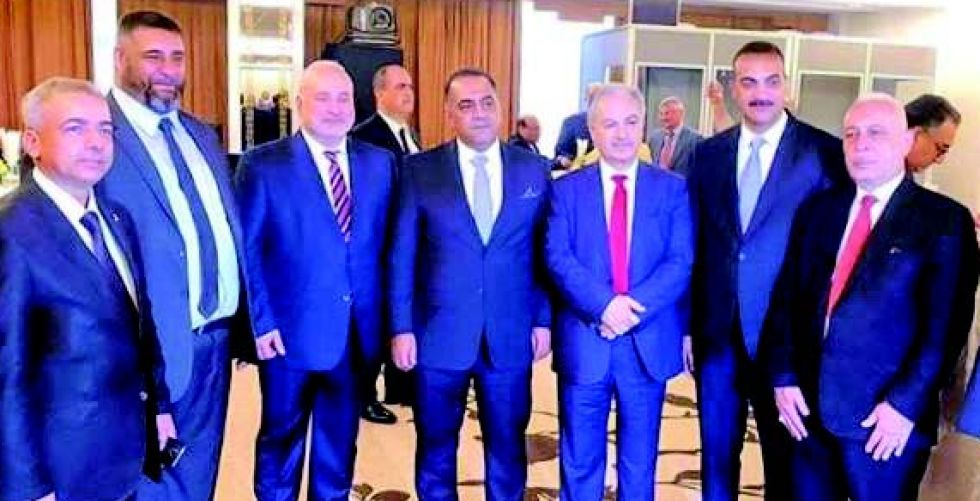 Al-Hamdani pointed to "the depth of the good Iraqi-European relations, which extend over a long history, especially that Iraq has political, economic and social relations with the European world," adding that "the Chamber aspires to exploit these good relations and reflect them on the economic side and the private sector, National economy".

"The Baghdad Chamber of Commerce is an old chamber with considerable weight in the region and is responsible for financial imports, trade revenues and imports representing half of Iraq's trade with the world by more than $ 15 billion a year."

He pointed out that "there is clear concern for the success of this forum, which came as a result of the belief of both sides to open new horizons of cooperation, in addition to their keenness to overcome all the obstacles that may face the trade process between Iraq and the European Union, which reached billions of dollars in the past few years "He said.

"We hope that these meetings will be an opportunity to help open new horizons of cooperation between the Baghdad Chamber of Commerce and the European Chambers of Commerce."

The participants expressed their keenness to establish relations with the Baghdad Chamber of Commerce as one of the oldest and oldest rooms in the region
It is a significant weight and represents an important commercial artery.

The participants also expressed their gratitude to the President of the Baghdad Chamber of Commerce, and praised the great efforts he is making with the Board of Directors of the Chamber in continuous and continuous communication and follow-up to all issues related to trade between Europe and Iraq.

They stressed that their efforts contributed greatly to raising the level of trade exchange between the participating countries in addition to their great role in encouraging many European companies to enter the Iraqi markets and work in all governorates
Country.

"The Baghdad Chamber of Commerce and Chambers of Commerce of the European Union agreed to establish economic forums in Iraq and EU countries to encourage investment and trade cooperation between the private sector of Iraq and their European counterparts," Hamdani said.

Foreign Ministry: The European Union and Iraq are continuing to achieve the goals set by the Kuwait Reconstruction Conference

Foreign Ministry: The European Union and Iraq are continuing to achieve the goals set by the Kuwait Reconstruction Conference


[rtl]The Iraqi Foreign Ministry confirmed on Saturday that the European Union and Iraq are continuing to achieve the goals set by the Kuwait Reconstruction Conference.[/rtl]

[rtl]"The European Union appreciates the contributions and sacrifices made by Iraq in the war against terrorism and appreciates Iraq's efforts to eliminate all forms of terrorist ideology," ministry spokesman Ahmad al-Sahaf said in a statement received by al-Madar.[/rtl]

[rtl]"The European Union and Iraq are working together to achieve the goals set by the reconstruction conference held in Kuwait in February 2018 in order to provide a better future for the people of Iraq," he added.[/rtl]

[rtl]"The EU's contribution of 1.2 billion euros in humanitarian assistance, stability, development and security cooperation since 2014 is the best proof of its long-term commitment to the strategic partnership with Iraq," he said.[/rtl]

Halaboussi to Mougirini: The House of Representatives is keen to strengthen its relations with the European Union

Halaboussi to Mougirini: The House of Representatives is keen to strengthen its relations with the European Union

Speaker of the House of Representatives Mohamed Halboussi said on Saturday that Iraq today is much better to establish close and multiple relations after his victory in the war on terrorism.

Al-Halbusi said during his meeting with the EU's High Representative for Security and Foreign Affairs Policy Federica Mugherini and the accompanying delegation, according to his press office statement. "Today, Iraq is much better to establish close and multi-lateral relations after its victory in the war on terror, "The directions of the Iraqi government and the House of Representatives is the openness to the Arab and regional and international environment and in all areas, which reflects positively on the interests of the Iraqi people."

The Speaker of the House of Representatives reviewed "the efforts of the Iraqi political forces and their components in strengthening the political situation in Iraq, which was reflected on the security and economic conditions better than in previous years," indicating "Iraq's need to support the European Union and the international community in general; for development and reconstruction in Iraq, And cooperate in resolving the issue of displaced persons. "

For her part, Mugherini expressed "the high representative of the policy of security and foreign affairs in the European Union expressed admiration for the development and stability in Iraq," stressing "the readiness of the Union to support the Iraqi government in the implementation of its government," noting "Iraq's success in developing a balanced political position in the region, The European Union to develop its participation in the process of reconstruction and construction in liberated cities, and expand its rehabilitation projects in all economic and security areas "

"Iraq wants to encourage European investment in Iraq and to increase cooperation in all fields, political, cultural, economic and social," he said, adding that Iraq sees the EU as a key partner.


He added that "Iraq victory over a supporter gave a high price, and the effects of this victory is important for Iraq and the region and the world, including the European Union, and that the major countries to establish Iraq in its reality as a country emerged from the wars and is now rising strongly and effectively not as a stable state for some time long".


"The standards applied in the classification of international relations should look at Iraq as a country that is stabilizing after long wars, and therefore we need some kind of positive discrimination," he said.


For her part, Mughrini confirmed that "I have seen Baghdad now is not what I saw the previous time, and that there is a big change for the better," indicating that "the main objective of her visit to Baghdad is to emphasize the EU's support for Iraq politically, morally and financially, as well as to show solidarity with him "He said.


"Iraq is one of the best partners of the European Union," she said, praising "the success of Iraq's balanced foreign policy in the region," calling for "to continue this policy."

Iraq to discuss scientific and cultural cooperation with EU

BAGHDAD balances News
Search and Minister of Higher Education and Scientific Research Qusay al - Suhail, Culture and Tourism and Antiquities Abdul Amir al - Hamdani, on Monday, with the head of the European Union mission in Iraq , scientific and cultural cooperation.
A statement by the Ministry of Higher Education and Scientific Research received / scales News /, copy of it, "al - Suhail and Hamdani held a meeting with Ramon Blicua president of the European Union mission in Iraq and his accompanying delegation."
The statement added, " The meeting dealt with future prospects of scientific and cultural cooperation among universities in the European Union and the Iraqi universities in the areas of joint university programs and in the context of research, training and cultural exchange."
The statement pointed out that "the participants addressed some of the UNESCO projects planned in Iraq and adopted by the European Union, where the views of the Iraqi side and the mechanisms to overcome the outstanding obstacles in this file were revealed, while the head of the EU mission said that the mechanisms that Iraq sees appropriate In this regard. "
"During the meeting, the EU ambassador and the head of the EU delegation presented a preliminary draft of the memorandum of understanding to be concluded between Iraq and the EU in the higher education and cultural exchange sectors between Iraq and EU countries, Scientific research, innovation and scientific exchange " 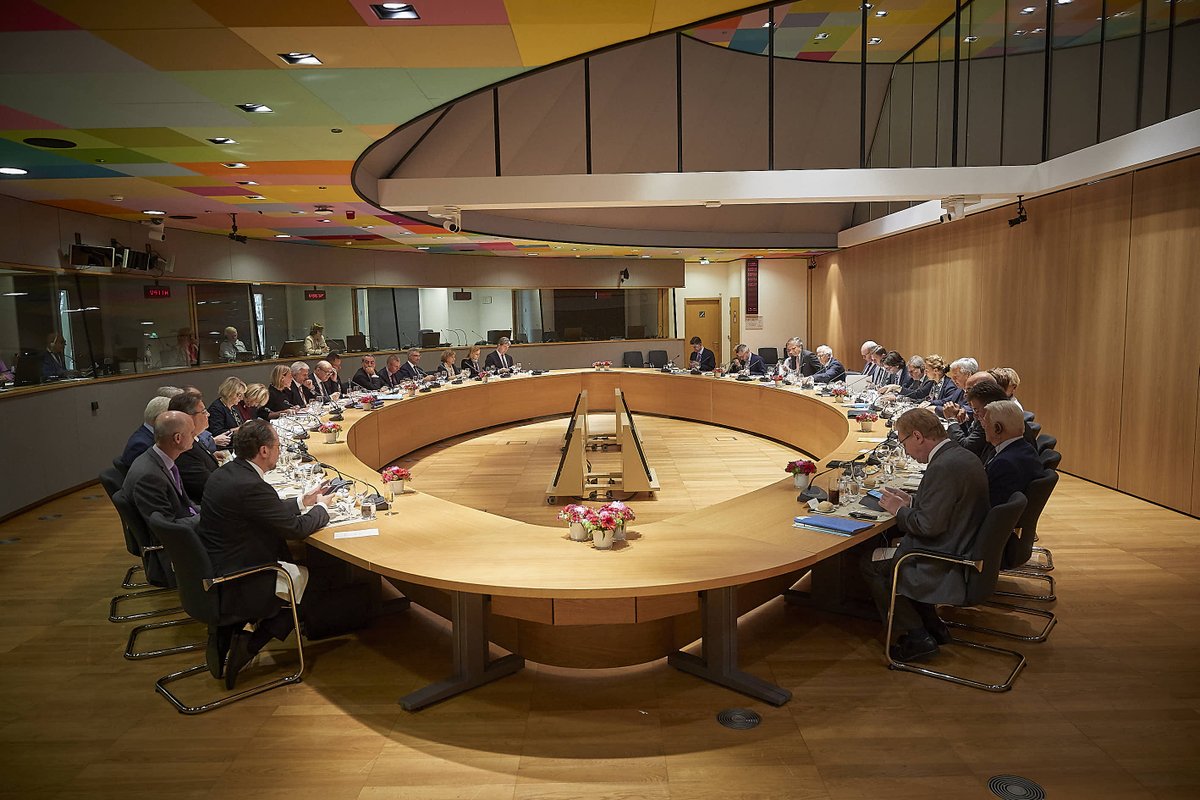 The European Union's foreign affairs council called on its international partners on Monday to honor the financial commitments they made at the Kuwait conference on Iraq 2018 "in time".

The Council also called for "improving the business environment in Iraq and creating a basis for a more sustainable and diversified economy in line with the commitments made at the Kuwait International Conference for the Reconstruction of Iraq in February 2018.

The European Union reiterated its unwavering support for Iraq's unity, sovereignty and territorial integrity, The need for economic and financial reforms to attract more investment and support.

On the other hand , he stressed the EU determination and its member states to continue his efforts in the framework of the global coalition against the so - called organization of the Islamic state (Daesh) and the support of the Iraqi authorities to counter the "terrorist" threats continued to this organization and the strengthening of the justice sector and reform of the police.


" He also expressed his full support for the work of carried out by the investigation team on the strengthening of accountability for the organization of crimes (Daesh) and cooperation with the Iraqi authorities in the collection and analysis of evidence in line with the UN security Council resolution (2379).

in the same context , the Union confirmed its intention to continue to provide support for Iraq with regard to the reform of the civil security sector m Through its advisory mission hello dialogue recently revolved around immigration. He stressed the importance of working with the Iraqi authorities to enhance cooperation and the exercise of their obligations relating to the return and acceptance of its citizens with full respect for the rights.

In light of current tensions in the region, the EU stressed the importance of "the countries of the region and all international actors to respect Iraq's sovereignty and the policy of constructive engagement with its neighbors fully."