Businesspeople and authorities from the Iraqi Kurdistan Region, Turkey, and Diyarbakir (Amed) meet at an economic forum in Diyarbakir on July 12, 2019. Photo: AA video


ERBIL, Kurdistan Region — Turkey can reach Arab markets and compete with other countries through the Kurdistan Region of Iraq (KRI) by providing better-quality products, said the head of the Diyarbakir Industrial Zone Union on Friday.

“Through the KRI, we can reach other areas in Iraq and even use their commercial capabilities to each other market in the Arab world,” Aziz Odabasi, a Turkish national, told state-run Anadolu Agency.

He spoke at a forum in Diyarbakir (Amed) that was aiming to bolster economic relations with the Kurdistan Region of Iraq.

“Thus, we will expand and diversify our market. In addition to the existing ones, we can produce better products with a higher quality, and gain the appreciation of the end customer, as well as empower our competitiveness,” he claimed.

The Republic of Turkey does not share any political borders with Arab states except for the Syrian Arab Republic. Currently, Ankara and Damascus have poor bilateral relations and are backing opposite sides in a civil war. With the Federal Republic of Iraq, Turkey only shares a border with the autonomous Kurdistan Region.

“Let’s increase it to $20 billion. We want to keep it at this level or even double it. We have the power to do this. The Turkish private sector is capable of revitalizing the Iraqi economy,” he said in a joint press conference with Iraqi President Barham Salih in March.

Officials from both sides of the Ibrahim Khalil-Silopi crossing were present at the forum. 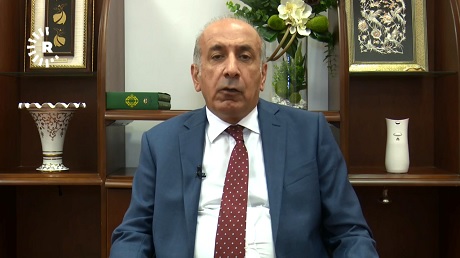 Head of the Diyarbakir Trade and Industry Chamber Mehmet Kaya speaks on the sidelines of a trade and economic forum in Diyarbakir, Turkey, on July 12, 2019. Photo: Rudaw video

The KRI Foreign Trade Forum in Diyarbakir was attended by Odabasi and many more Turkish and Kurdish officials and businesspeople.

The deputy head of the Diyarbakir Trade and Industry Chamber (DTSO), Erdal Avsar, said: “We are trying to develop tourism relations with the KRI…” noting it is the closest region.

“These meetings will highly contribute to the revitalization of tourism in the future; we share the same language, culture, and beliefs with the KRI. Additionally, we are doing what is required to have mutual tourism,” he added, according to a DTSO statement.

Pshtiwan Abdulkarim from the Kurdistan Regional Government (KRG) Ministry of Municipalities and Tourism praised the hospitality demonstrated in neighboring Diyarbakir.

“Our travel agencies are very content with Diyarbakir … We have accompanied agencies [from the KRI] which really want to work here and contribute to KRI-Diyarbakir tourism. They are also very pleased here,” he added in the statement.

Authorities in the Kurdish province of Diyarbakir are keen to have better economic relations with the Kurdistan Region.

A delegation from DTSO visited Sulaimani on July 10, meeting with Governor Haval Abubakir and tourism and trade authorities.

Both sides agreed to conduct joint tourism fairs and work together on advertising billboards which would benefit both sides.

Mehmet Kaya, the head of DTSO, revealed to Rudaw on Friday that they are working on removing visa requirements between Erbil and Ankara.

“While both brotherly countries’ trade volume increases and they share roughly a 500 kilometer border, the availability of visa issuance is not acceptable. Our meetings with the [Turkish] Foreign Ministry continue on this subject. We want visa [requirements] to be removed,” he said.

Kaya said Turkish economic relations with Iraq and Kurdistan Region are “at a very, very important level and it is not appropriate to have visa application. We hope our demands will be responded to soon.”