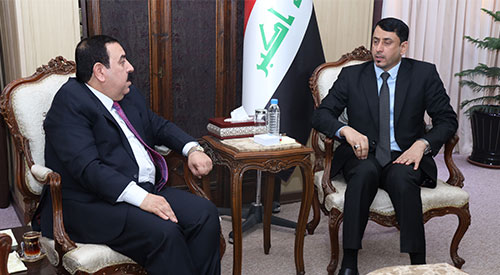 The Secretary-General of the Council of Ministers, Mr. Hamid al-Ghazi, discussed with the Governor of Anbar Ali Farhan Sir the process of reconstruction of the province.

The Secretary-General stressed the need to accelerate the completion of urban projects in the province, and provide an environment conducive to the return of the remaining displaced to the province.

He reviewed the governor of Anbar, the most prominent projects completed during the last period, and the work of infrastructure.

The governor requested the necessary support to secure and support the convoys of pilgrims on the road to Saudi Arabia, in order to avoid any security breaches. The Secretary-General pledged to follow up the matter with the ministries and security agencies to achieve this.