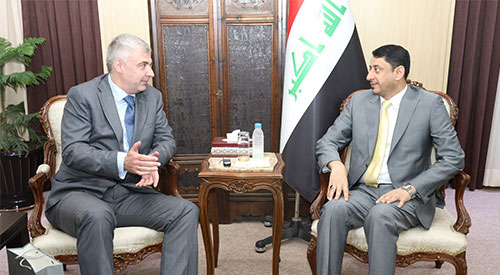 The Secretary-General of the Council of Ministers, Mr. Hamid al-Ghazi, upon receiving Russian Ambassador Maxim Maximov, the desire of the Iraqi government to engage Russian companies in the fields of investment and urban and oil in the country.
The Secretary-General considered the Russian Federation a friendly country because of its positive attitude towards Iraq. He pointed out the need to develop economic and trade interests and strengthen relations at the political and security levels in exchange for providing Iraq with all facilities to develop coordination and cooperation between the ministries and the embassy.
The Russian ambassador pointed to the total Russian investments in the Iraqi oil and gas sector, which has exceeded 10 billion dollars, stressing his country's encouragement to Russian companies to increase the volume of investment in Iraq, and played an important role in supporting Iraq in the fields of oil and investment and the provision of fellowships, and Russia's desire to develop partnership in Security and counterterrorism.
The Russian ambassador pointed to the participation of his country, many months ago at the meeting of the Joint Committee in Baghdad, to coordinate work in the areas of oil and electricity, transport, and follow-up to the outcome of the meetings.
He also stressed Moscow's efforts to facilitate the granting of visas to Iraqis of special grades, diplomats, businessmen and citizens, and the inclusion of some amendments to the visa system for some tourist areas in Russia.