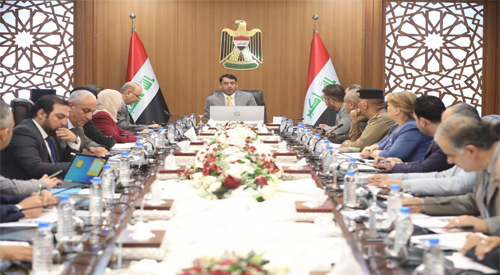 The Secretary-General of the Council of Ministers, Mr. Hamid Al-Ghazi, and the Chairman of the Supreme Committee on e-Governance, called for the elimination of conflicts and increased coordination among ministries to initiate practical steps in the e-governance project.
He said that the General Secretariat of the Council of Ministers implements the project with the ministries and other government agencies. It is called upon to implement advanced practical steps, stressing that the general orientation in the Council of Ministers is pushing towards completion of the project and overcoming all difficulties before it.
The Secretary-General has reached an agreement with the Ministry of Commerce to acquire a building to allocate the project headquarters and a national information center, stressing that Iraq has the human and material resources necessary to complete this important project included in the paragraphs of the government program.
The members of the Supreme Committee reviewed a number of requirements and obstacles, such as legal matters, draft laws that reached the State Consultative Council, the decisions of the Council of Ministers to speed up the legislation of the laws, support the information technology supporting the project, complete the electronic signature and others. Ministerial strategies to implement the linkage processes according to the needs of government agencies.