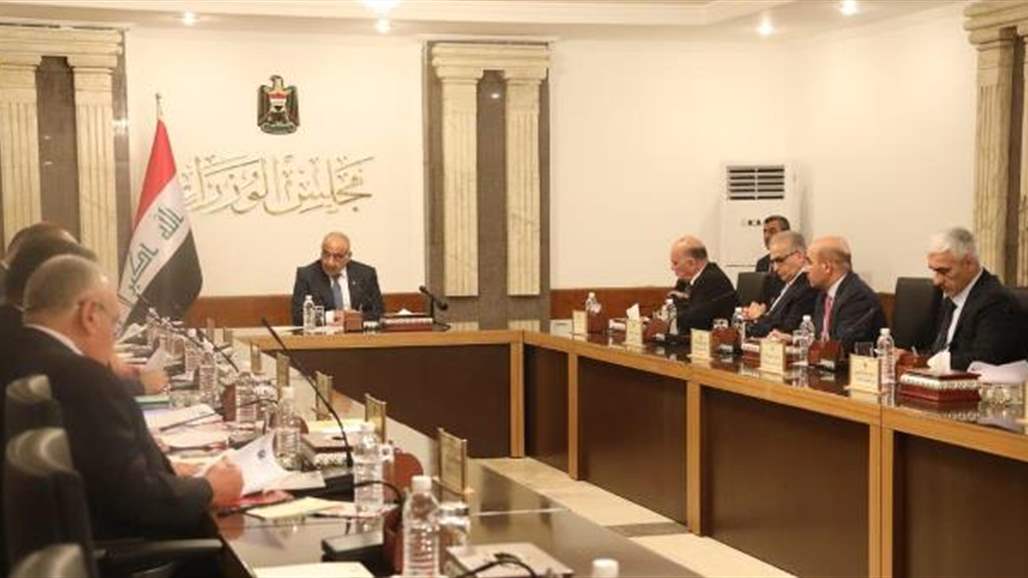 The Cabinet approved on Tuesday the approval of the general managers of the state institutions according to the budget, and approved the draft amendment of the Second Law of Roads No. 35 of 2002.

"The Council of Ministers held its regular session on Tuesday, July 9, 2019 under the chairmanship of the President of the Council, Adel Abdul Mahdi ," the Prime Minister's Information Office said in a statement received, noting that "the Council approved the recommendations of the Ministerial Council for Energy on the project of export pipeline for Iraqi- , And the project to establish an industrial island for the export of crude oil in Iraqi territorial waters.

"The Council approved the installation of public directors in the state institutions in accordance with the provisions of Article (58) of the Federal Budget Law for fiscal year 2019, and approved the request of the Ministry of Construction and Housing, which includes the establishment of a fixed pedestrian bridge in the area of ​​creations in the schedules of the investment plan of the ministry , And the Council approved the exception of the Ministry of Education from the book of the Council of Ministers for the economy and allow it to refer the contract to provide educational supplies to the General Company for the production of educational supplies.

"The Council approved the draft law of the second amendment  to the Law of Public Roads No. (35) for the year 2002 again to the Council of Ministers , while the meeting witnessed the approval of the subject of improving the business environment and investment, and vote on the draft law of accession of the Republic of Iraq to the 1997 Protocol to amend International Convention for the Prevention of Pollution from Ships of 1973 as amended by its 1978 Protocol ".

The office noted that "the Council approved the measures taken on the loan of the Iraqi Bank for Trade for the purpose of completing the financing of the projects of Samawa and Dhi Qar - simple cycle."